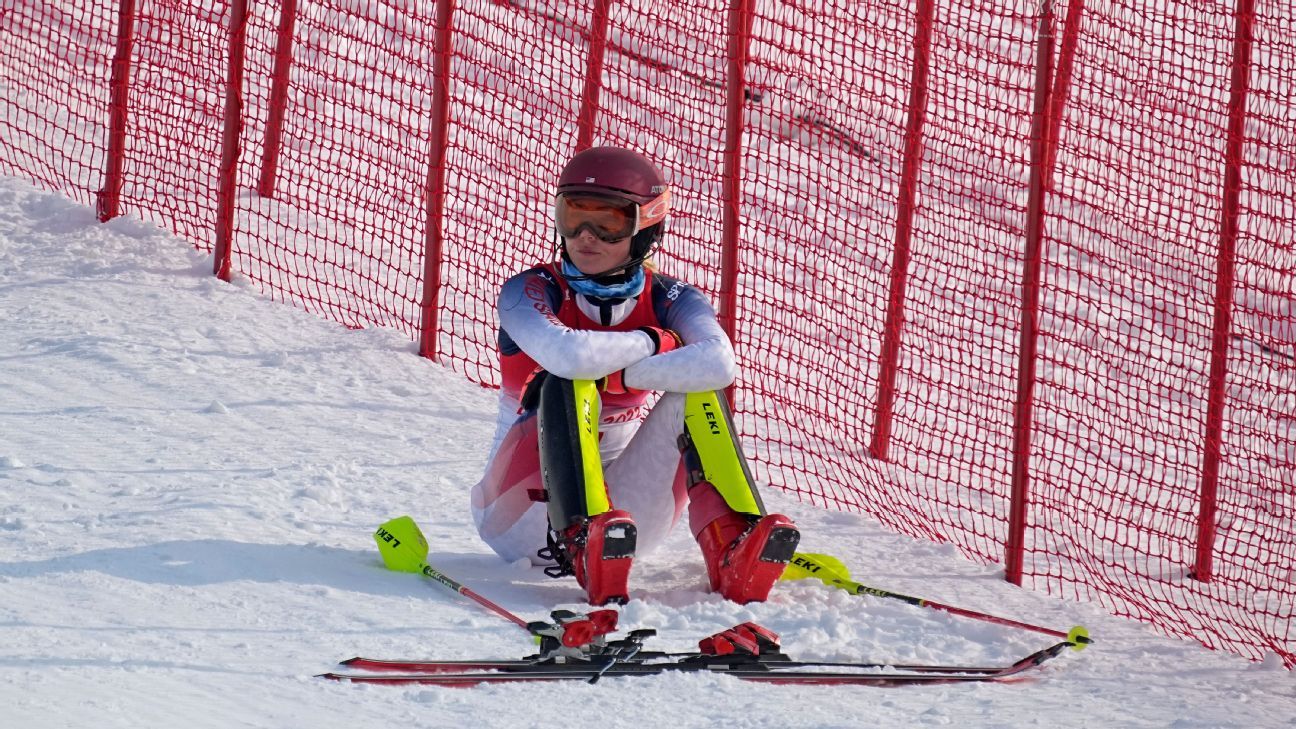 In a shocking moment on the slopes Wednesday in Beijing, Alpine skier Mikaela Shiffrin got a DNF in the second race in a row. The American superstar skidded out of control about five seconds into the opening run of the slalom and is out of the event.

In a wild night in snowboard competition, Lindsey Jacobellis won gold in her fifth Olympics in snowboardcross, while Chloe Kim and Shaun White qualified into halfpipe finals.

Live updates on the action in Beijing here:

Shiffrin gets a DNF, again

Mikaela Shiffrin’s Olympic woes continued on Wednesday as she recorded her second consecutive “Did Not Finish.” Just two days after skiing out in the opening run of the grand slalom, the 26-year-old American had another costly mistake and lasted just five seconds on the course in the first run of the slalom competition.

A clearly stunned Shiffrin sat on the side of the course with her head in her hands for about 20 minutes following the disappointing result.

Gutted for @MikaelaShiffrin but this does not take away from her storied career and what she can and will accomplish by going forward. Keep your head high ❤️ pic.twitter.com/fSgqSii0JA

Shiffrin is hoping to make history in Beijing by winning at least one Olympic gold medal, which would give her the most ever by an American Alpine skier. Another medal of any kind would tie her for the most decorated Olympic woman skier from the United States. She still has three more chances to do just that, starting with Friday’s super-G competition. — D’Arcy Maine

A heartbreaking DNF for @MikaelaShiffrin. She is ok, but disappointed. 🙏 #olympics #AlpineSkiing

What’s next for Shiffrin?

After her second straight disappointing DNF result in the slalom, an emotional Shiffrin left some doubt as to the rest of her race schedule throughout the Olympics.

Shiffrin is currently expected to participate in the super-G race on Friday, and then the downhill and combined competitions on Tuesday and Thursday of next week, but when asked if she was still “up to compete” in the remaining events, she wasn’t t certain.

“The hill and the ski track looks pretty incredible and I think it will be a pleasure to ski but I also have some teammates who are really fast and we have the athletes who can fill the spaces. If I’m going to ski out on the fifth gate, what’s the point?

Jacobellis wows for gold in snowboardcross

In her fifth Olympics, one of the greatest snowboardcross athletes of all time finally got Olympic gold. Jacobellis, 36, has long been remembered as the athlete who was leading the pack in 2006 before falling on a showboat move and settling for silver. In Beijing, she got redemption — and the first gold medal for Team USA at these Games.

She is now the oldest ever snowboarder (male or female) to win an Olympic medal. Congratulations!#Beijing2022 | @TeamUSA | @usskiteam | @LindsJacobellis

Kim leads the field in halfpipe

In the least surprising moment of the Games thus far, American snowboarder Chloe Kim qualified first into Thursday’s halfpipe final, where she will compete to become the first woman to win two Olympic gold medals in the event. But don’t ask the 21-year-old about defending her gold medal from Pyeongchang. It’s a gold medal, she told ESPN in December, not a fortress.

“I don’t really get the whole ‘defending’ thing,” Kim said. “I’m just doing another contest and hopefully the conditions are great and I’m able to land the run I want to land.”

That strategy has worked well for Kim, who has not lost a halfpipe contest she’s entered since Pyeongchang and in Wednesday morning’s qualifying, she easily topped the rest of the field with her first-run score of 87.75. “I was really nervous, cause we’re at the Olympics,” Kim said in a TV interview after her second run from her. “But the goal of qualifying is just to make it through to finals, so I’m stoked. I don’t know how many more Games I’m going to do, so I’m embracing the moment as much as possible.”

In perhaps the biggest surprise of the contest, Kim’s teammate, Maddie Mastro, one of the only riders who could have challenged her for gold, struggled on both of her runs and finished just outside the top 12. Kim will be the only American rider in the end. –Alyssa Roenigk

.@ChloeKim is here to remind us that if you ever get nervous, just eat a churro. pic.twitter.com/W79VYgqcqw

In men’s halfpipe, three-time gold medalist Shaun White has said in repeated interviews that he plans to defend his 2018 gold medal and won’t give it up to his younger competitors without a fight. “I’m going to make them work for it,” White has said.

On Wednesday, White had to fight just to make it into the end. After uncharacteristically falling on his signature trick from him, the double McTwist 1260, White sat in 19th place heading into the second runs. It would be nearly an hour before he had the chance to drop in again. “I had a lot of time to kill, a lot of thoughts running through my mind and a lot of pressure,” White said after the event.

Before dropping in for his final qualifying run, White paused at the top of the pipe. Another fall would keep him from making finals for the first time in his Olympic career. But in classic Shaun White style, the Carlsbad, California, native landed a solid run that moved him into fourth place and into Friday morning’s final.

“I am so happy I put that last run down,” White said. “I’m feeling incredible. You have to fight for it if you want to get into finals. In finals, we’re not holding back. For me especially, I’m gonna throw everything I got at it.”

When asked if “everything” included a triple cork, White demurred. “I’ve been eyeing it and I’ve been feeling this halfpipe. It’s a great venue. It’s finals, so we’ll see. If there’s a time to do it, that will be it.”

Two-time Olympic silver medalist Ayumu Hirano, 23, of Japan qualified first and will be the final rider to drop in Friday’s contest. Scotty James of Australia qualified second ahead of Ruka Hirano of Japan.

American skier Colby Stevenson took silver in freeskiing big air — and became the first US athlete to win a medal in the sport’s debut. An Olympic rookie, Stevenson’s unlikely comeback from a near-fatal car accident in 2016 to become a top slopestyle and big air skier has made him one of the most popular athletes on the US freeski team.

Stevenson’s teammate, Alex Hall, was a heavy favorite for gold heading into the final. In his third and final run, Hall went for the biggest trick of the contest — at 2160, the same trick he used to win X Games Aspen three weeks ago — but crashed on the landing and finished eighth.

Jessie Diggins made history for Team USA as the first woman to earn an individual medal in cross-country skiing. This isn’t Diggins’ first time writing Olympic history. In 2018, along with her teammate Kikkan Randall, she won America’s first ever gold medal in the sport.

Shaun White announced right after the Beijing Olympics began that these will be his fifth and final Winter Games. He is undoubtedly one of America’s greatest Olympians and a snowboarding icon. He has three Olympic gold medals and 13 Winter X Games wins.

“I’m a competitor and I want to win,” White said of his final Olympics. “I can’t show up without that feeling, so it’s still there. I am going in eyes open, ready for any outcome. But yeah, I’m hoping to win.”

White is not the only five-time Olympian competing tonight. Lindsey Jacobellis will compete in snowboardcross. She has won six world championships, 10 X Games gold medals and an Olympic silver medal.

Former Olympic gymnasts Shawn Johnson and Nastia Liukin are tuned in to the Winter Games in style, with each wearing one of their own medals.