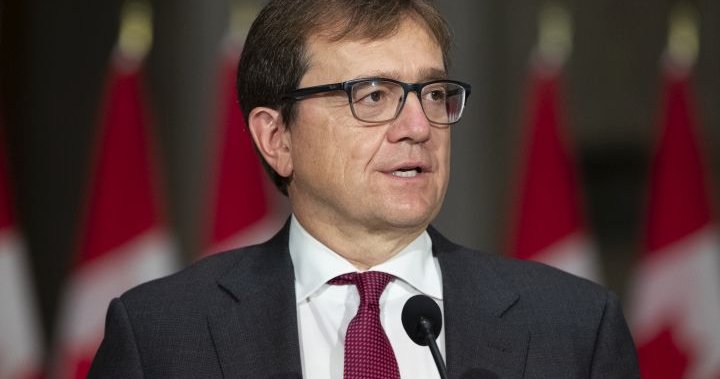 White House officials, Capitol Hill lawmakers and the US secretary of energy have all expressed “significant sympathy” for the plight of Canada’s Line 5 pipeline, Natural Resources Minister Jonathan Wilkinson said Thursday after a day of meetings in the US capital.

But the 65-year-old pipeline, a vital energy for artery border states in the US Midwest as well as Ontario and Quebec, is facing a pair of existential legal challenges — one from the government of Michigan, the other from an Indigenous group in neighboring Wisconsin.

“I certainly did raise that this is part of enhancing North American energy security, that it’s ensuring that we are not taking steps that are going to take us backwards,” Wilkinson said after a panel discussion with Energy Secretary Jennifer Granholm.

That position — first expressed by Wilkinson’s predecessor Seamus O’Regan, and reiterated by Wilkinson himself last week — is that the continued operation of the pipeline is “non-negotiable.”

Michigan Gov. Gretchen Whitmer, long a political ally of Biden, has been trying to shut down Line 5 since November 2020, fearing a catastrophic rupture in the ecologically sensitive Straits of Mackinac, where the twin lines cross the Great Lakes.

And a fresh threat has emerged in Wisconsin, where the Bad River Band of the Lake Superior Tribe of Chippewa is urging a federal judge to close the pipeline amid a dispute over easements on Indigenous territory that the band argues expired in 2013.

While Canada remains “very focused” on avoiding such a decision, Wilkinson allowed Thursday that Ottawa has been giving some thought to what it would do otherwise, though he did not elaborate on what strategies are in play.

“In the remote eventuality that there is an issue that we need to address, of course it’s prudent for us to be thinking about what might be done,” he said. “But our primary focus continues to be on ensuring that this pipeline remains open.”

The Michigan case eventually prompted Canada’s federal government to file a so-called amicus brief — an argument from a “friend of the court” in favor of Calgary-based Enbridge Inc., the defendant in both cases and Line 5’s owner and operator.

Ottawa has also invoked a 1977 pipelines treaty, originally sought by the US government in an effort to avoid interruptions to the cross-border flow of energy, and those talks between the two countries have been ongoing.

Canada won’t be filing an amicus brief in the Wisconsin case on the advice of lawyers who warned it could be “counterproductive” to efforts to resolve the dispute in Michigan, Wilkinson said. And I have expressed hope that the treaty talks could encompass the issues in play in both cases.

“It’s certainly possible that it can be part of the same process,” he said.

“Ultimately, what we are looking for is a resolution to all of these issues, so the discussions that will be going on will relate to Line 5 more generally. My hope is that it could be resolved through the same process.”


In their panel discussion, hosted by the DC-based Center for Strategic and International Studies, Wilkinson and Granholm agreed that the crisis in Ukraine and pressure on supply chains have helped to bring the two countries closer together on the issue of energy security.

That discussion was more focused on the future than the present, but the Vancouver-born Granholm sounded bullish on the idea of ​​working closely with Canada to develop a green energy future.

“To me, the opportunity is just so powerful to have a North American powerhouse of an alignment on clean energy deployment and technology development,” she said, suggesting former prime minister Lester Pearson’s dream of “peace in the world” could be realized by ending dependence on fossil fuels.

And she acknowledged the potential Canada offers as a partner to the US on the extraction and production of critical minerals and rare earth metals, a linchpin component of the global push toward electric vehicles and away from the internal combustion engine.

“Canada has got some best practices that we should be looking at; we shouldn’t be afraid of extraction, if it’s done in a responsible way,” she said. “There’s lessons, but there’s also real partnerships that we can be doing on areas where we really need help.”

Granholm also indicated that the Biden administration is taking steps to “bust through” regional and state-level opposition to projects designed to allow the US to import clean hydroelectricity generated in Quebec and elsewhere north of the border.

In 2020, voters in Maine pointedly rejected a fully approved proposal to run transmission lines through their state that would have linked a billion-dollar Hydro-Quebec energy generation project with markets in Massachusetts, as well as Vermont and New York.

“If Hydro-Quebec wants to make sure that they are able to deliver hydropower and a state votes against it, and that state is a critical state to be able to make that connection to the northeast, it’s extremely frustrating,” she said.