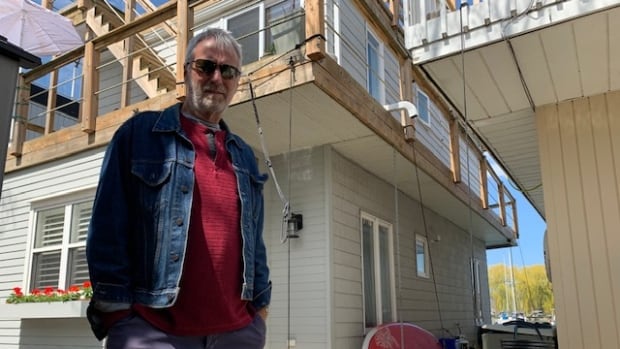 Residents in a neighborhood of floating homes at the Scarborough Bluffs have been without leases since last month and some say they’re worried they might have to leave if they can’t get the problem resolved.

About two dozen homes, some worth more than $1 million, are tucked away in a corner of the Bluffer’s Park Marina, where they sit on concrete barges moored to a dock. They can’t be easily moved, since — unlike traditional houseboats — they have no motors.

“It’s frightening,” said Sharron Lazar, who’s lived in her floating home for about 15 years. “I don’t know what kind of house we’d move into. I’d rather not think about it. I can’t imagine.”

The federal Department of Fisheries and Oceans (DFO) owns the lots, which are managed by the city and leased to the homeowners. Those leases expired at the end of April, and while talks between the DFO and the city are underway, so far new agreements haven’t been offered to the homeowners.

The DFO owns and leases out other water lots across the Greater Toronto Hamilton Area, but it’s unclear how many of those leases it’s renegotiating.

“They don’t have the security that a long-term lease would have,” said Coun. Gary Crawford, who represents Ward 20, Scarborough Southwest.

“They are a very integral part of this community and I fully support them being here… and my hope is to be able to resolve this issue around the lease soon so we can get back to some sort of normalcy.”

The DFO leases the water lots to the Toronto Region Conservation Authority (TRCA), Crawford told CBC Toronto. The city manages the lots for the TRCA, which leases them to the marina. The marina, in turn, rents the lots to the homeowners for a mooring fee — about $800 a month.

None of the parties to the lease negotiations, the DFO, the city and the TRCA, would offer CBC News details of those talks or say when they might agree on new leases. It’s also not clear which body would make the ultimate decision to force the homeowners to leave.

The homes have been at the marina since 2001. They were originally one-storey houses built on the Toronto Islands to accommodate officials who would have been in the city for the 2008 Summer Olympics. When Toronto lost that bid, the houses were moved to their present location and offered for sale by the city.

Over the years, the homeowners added second storeys, sun decks and other amenities.

According to a Royal LePage website, two of the homes are for sale, but only one of the listings has an asking price: $850,000. The two-storey, two-bedroom, two-bath home is 1,200 square feet. Owners can expect to pay about $800 in property taxes, according to the listing, and “mooring fees” to the Bluffer’s Park Marina of $811 a month. It’s this fee that is currently at issue and will be determined in the new lease.

A second float home, not yet listed, is going for $965,000, according to consultant Paul Peic’s website, Toronto Float Homes.

While some are worried that the new leases could be prohibitively expensive or that they could be evicted with little notice, others like John and Ingrid Whyte say they’re not worried.

“I’m sure they’ll solve it; everybody wants a marina down here,” said John Whyte, who’s lived in their floating home for seven years.

“There’s always been fee increases. We expect them to be reasonable. I have no reason to think they won’t be, so I’m not too worried about it.”

Crawford also says he doesn’t think the neighborhood is at risk.

“That is something I’m confident will not happen. We really relish the fact that they are part of our community down here.