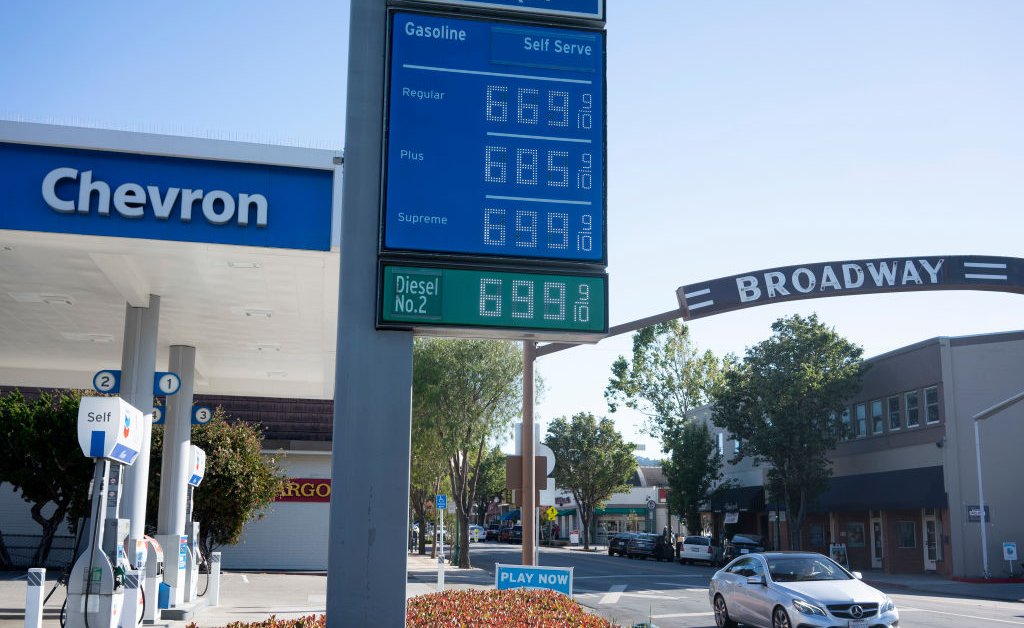 Gasoline prices hit $5 a gallon on average for the first time in US history this week, and there’s little sign that relief is coming soon.

The pain can be felt at pumps across the country, but drivers in California are among the hardest hit. The average gallon of gas in the state has reached a whopping $6.43, according to the American Automobile Association. The national average price per gallon is $5.01, and the cost is above $5 in 21 states. As the war in Ukraine rages on and inflationary pressures reach new levels, lawmakers are scrambling to find a quick solution.

On Wednesday, President Joe Biden called on major US oil refiners to ramp up production of gasoline and diesel, slamming oil and gas refiners that he said had “tripled” their profit margins while American families face a crunch on prices. “The crunch that families are facing deserves immediate action,” Biden wrote in a letter to seven oil refiners. “Your companies need to work with my Administration to bring forward concrete, near-term solutions that address the crisis.”

But experts have warned there’s not much lawmakers can do to immediately curb inflation, warning that gas prices will likely continue to rise in the coming months.

Here’s what you need to know.

Why are gas prices still rising?

A number of factors have led to the current situation, including increased demand for gasoline, Russia’s invasion of Ukraine and supply chain disruptions induced by the pandemic.

As more Americans travel by car and commute to work this summer following COVID-19 lockdowns in recent years, oil companies have had to quickly ramp up production to meet growing demand. Many of these companies had shut down wells and laid off workers during the pandemic—a time when crude prices were so low that some traders were willing to pay as much as $37 per barrel to avoid being stuck with their holdings.

The White House has taken aim at the oil industry for this, accusing energy companies of purposefully not ramping up production in order to charge more, though oil companies deny they are keeping prices artificially high to maintain high profit margins. “There’s been a move domestically for a lot of the oil and gas producers to shore up their books,” says Harrison Fell, a senior research scholar at Columbia University’s Center on Global Energy Policy. “That means spending less on exploration and expanded drilling and spending more on paying down debt and increasing returns to shareholders.”

The war in Ukraine has also contributed to the spike in energy prices, and continues to upend global oil and gas markets four months after Russia’s invasion. Oil supply took a massive hit when the US and EU banned imports of Russian oil, hoping a series of punitive measures would force Russia to retreat. But much of the world relies on Russian oil, so the move intensified market volatility and led to rising oil prices.

Taken together, all of these factors have pushed Brent crude, the international oil benchmark, up from $95 a barrel in March to more than $120 this week.

What are lawmakers proposing?

The issue of inflation has become a political nightmare for Biden, who referred to the rising costs as the “bane of our existence” on Jimmy Kimmel’s show last week. The actions the White House has taken so far, such as a record-breaking release of oil from the strategic reserves, have had little impact. At more than $5 a gallon, gas expenses are making a serious dent in the finances of many households, and lawmakers are racing against the clock to find solutions.

“I’ve been struck by the lack of appetite in either party to talk about things that could be done in the near term to suppress demand,” says Barry Rabe, a professor of political science and environmental policy at the University of Michigan. “We’ve heard very little from Congress in the last two years on energy, despite all of the initial hoopla, and it’s not clear what energy policy is going to look like after the November election.”

Biden’s main strategy so far has been to convince US oil producers to ramp up drilling. It’s been met with resistance, however, as oil companies face pressure from shareholders not to chase high oil prices. “Their hands are somewhat tied,” Fell says. Domestic oil producers, like ExxonMobil, are private companies that have a right—and in some cases a duty—to respond to market challenges with their shareholders in mind. “It’s a hard thing to undo—you can’t go up to them and say stop giving dividends to your shareholders and start dumping that money into oil and gas exploration.”

But Rabe says lawmakers can try to create market incentives for oil producers to speed up production. The White House has considered implementing a federal gas tax holiday that could reduce average gasoline spending by between $16 and $47, according to an estimate from the Penn Wharton Budget Model. A suspension of this tax, which costs Americans around 18 cents per gallon, would require an act of Congress to take effect, though some lawmakers oppose the idea of ​​losing out on critical tax dollars needed to fund infrastructure projects around the country.

Lawmakers have also discussed focusing their efforts on increasing the fuel efficiency of vehicles—making it more convenient to buy electric cars—or even expanding infrastructure for public transportation as potential solutions. But doing so would likely take years to put into effect and have little impact on the surging gas prices in the short term, Fell says.

When can consumers expect relief?

It’s unclear when gas prices will fall, but the global factors pushing up crude prices are unlikely to ease anytime soon. Analysts at JPMorgan estimate that prices could arise another 37% by August, hitting $6.20 per gallon on average.

The war in Ukraine—and subsequent restrictions on Russian oil—is showing little sign of being resolved. And US refineries are yet to ramp up output as they weigh the costs of expansion with shareholder pressure. A sign of hope, experts say, is that the Organization of the Petroleum Exporting Countries (OPEC) has agreed to modestly increase production in July and August, with Biden visiting oil-rich nations next month to foster a better relationship with leaders in the Middle East. But a handful of member countries have been producing well below their current allotments.

“These aren’t super quick fixes,” Fell says. “Getting more refined oil and into gas stations is a much longer process that won’t provide relief until maybe several months.”

Write to Nik Popli at nik.popli@time.com.