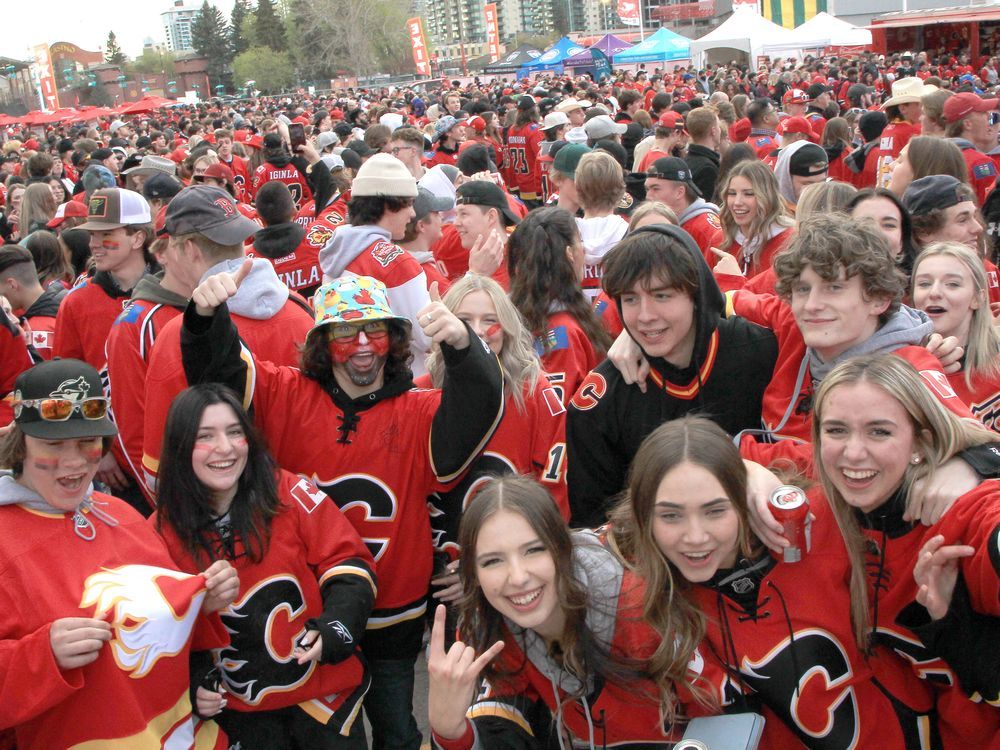 Calgarians are preparing to cheer on their team from afar with viewing parties, packed patios and giant screens as the battle of Alberta heads north to the capital for game three on Sunday.

The first two games of the first playoff meeting between the Flames and Oilers in over 30 years led to the teams being deadlocked with one win a piece. Games one and two were held in front of packed crowds at the Scotiabank Saddledome as well as packed bars and restaurants throughout Calgary. Game one also had the Saddledome’s Red Lot greet thousands of fans to watch outside the arena.

However, with the next two games being road games, Calgary Sports and Entertainment Corp. is planning to welcome fans back into the Dome for a family watch party on the Jumbotron on Sunday. Dallas Kitt, CSEC’s manager of events, said the team will be hosting an entertainment experience and will have all the spectacle a normal home game would entail.

“We will be having a lot of the same elements that you did come to see when you attend a regular hockey game with introductions and hosts, then videos and promotions, prize giveaways,” said Kitt.

Kitt said CSEC made 10,000 tickets available Saturday morning and that by 3:30 pm they were all sold out. She said CSEC hopes to have the Red Lot, which has a capacity of 5,000 people, will be open again soon but noted there is still damage to several parts of the viewing area, including the staging.

“There was quite a few things within the site that had a bit of damage to it just because of the high wind likes. The staging being the biggest one out of that,” said Kitt. “So it’s just gonna take a few days and ordering a few more parts to get it all back up and running.”

Meanwhile, pubs, bars and restaurants are preparing for a continued influx of customers, packing into their establishments to watch the games. Mike Shupenia, owner of Side Stree Pub and Grill, said he is planning to have a five-meter screen set up outside for Tuesday’s game four and a fully licensed extended patio by game five. He said he is hoping Kensington Crescent can turn into the Red Crescent.

Shupenia said that as the cup run has continued, there’s been more and more people trying to get a spot to watch.

“It’s the biggest snowball I’ve ever seen. We’ve been busy for every game, we’re a sports bar, so we’re packed every game,” said Shupenia. “We’ve noticed that people are now standing, we’ve got patio TVs and people are literally standing outside on the side of the patio and watching the game just standing up and not being served. It’s definitely getting really, really crazy.”