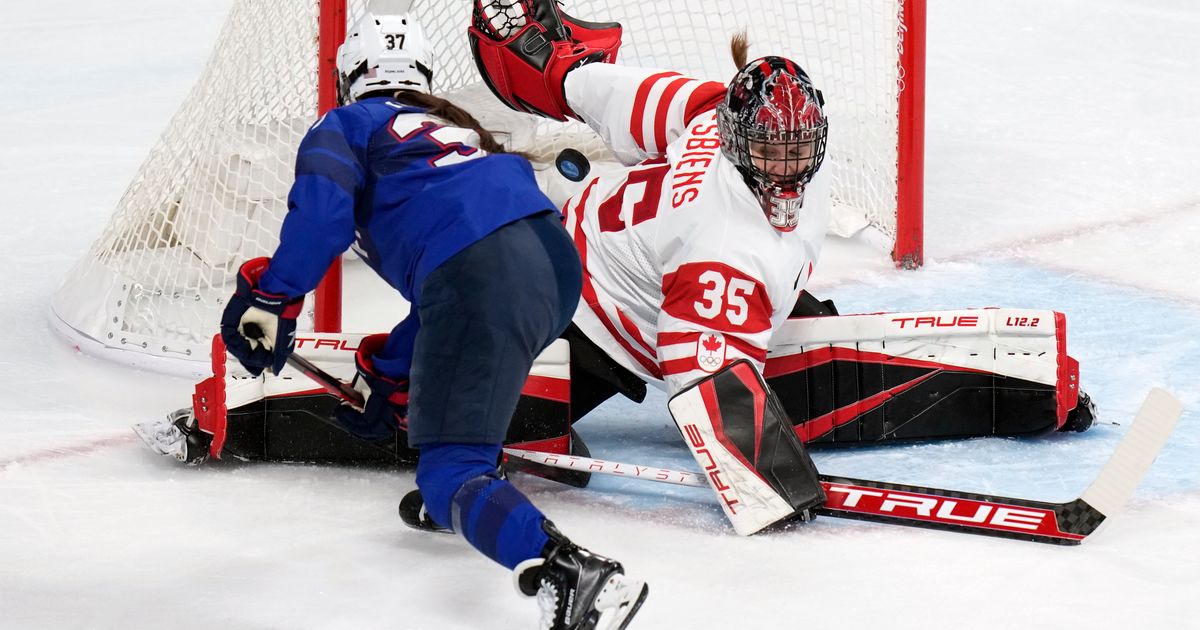 BEIJING (AP) — Hilary Knight would like to have a word with one of her former coaches, who placed an emphasis on getting shots on net.

Ultimately, the four-time US Olympian said, it comes down to quality over quantity.

“There’s different kinds of opportunities, right?” Knight said following a 4-2 loss to Canada on Tuesday to close the Olympic women’s hockey preliminary round, in which the Americans had a 53-27 edge in shots.

“We had a coach who said, ‘Get 60 shots on net and you’re going to win the game,’” she said. “It really doesn’t work that way at this level.”

The Americans received a reminder of that when their five-game Olympic winning streak dating to a 2-1 loss to Canada in the preliminary round of the 2018 Winter Games was snapped.

They now have work to do to generate more offense if they intend to defend their Olympic title in what is expected to be a rematch against Canada in the gold-medal game. By finishing second in the Group A standings, the US (3-1) can begin honing its scoring approach starting with a quarterfinal matchup Friday against the Czech Republic, a Winter Games newcomer.

“I’m glad to hit the reset button and focus on a different opponent,” coach Joel Johnson said. “And if we see Canada again, great. We hope it’s an opportunity to win.”

The focus is on finishing, especially after the US also had scoring issues, with five goals on 62 shots, while shutting out the Russian team on Saturday.

Through four games, the US ranks fourth of 10 teams in scoring efficiency, generating 20 goals off a tournament-leading 233 shots. Canada, by comparison, leads the tournament in efficiency, with 33 goals off 194 shots, followed by Japan (13 goals, 140 shots) and the Czechs (10, 111).

The power play is also a concern. The US ranks fourth, converting four of 19 chances. Canada, meanwhile, has been the most productive, going 6 of 13 on the power play, including Brianne Jenner converting her team’s lone opportunity on Tuesday.

Jenner’s goal, capping a nifty three-way passing play, came at a time when the US had controlled momentum, having a 14-2 edge in shots through the first 14-plus minutes. The back-breaker for the Americans, however, came when their power-play unit gave up a shorthanded breakaway to Marie-Philip Poulin, who eventually scored on a penalty shot awarded to her after Cayla Barnes was called for hooking.

Not only did the power play blow a chance to tie the game at 3, the US fell behind 4-2 with 2:35 remaining in the second period, with Poulin capping Canada’s three-goal run over a span of 5:25.

While the Canadians possess an aggressive transition attack to fit their players’ speed and play-making strengths, the Americans have a more plodding offense, more reliant on zone time and converting chances around the crease.

Canada’s defense countered by crowding the front of the net to limit most of the Americans’ chances to the outside.

“We just need to keep the pucks off the yellow and get them to the net and create that time and space that we need,” US captain Kendall Coyne Schofield said, referring to the yellow ribbon along the bottom of the boards.

Both American goals came from in close. Dani Cameranesi converted her own rebound, and Alex Carpenter was set up to the right of the net, where she backhanded a shot in.

Otherwise, Canada goalie Ann-Renee Desbiens had a mostly an easy time stopping shots from the outside.

“It didn’t feel like a 50-something shot game,” Desbiens said.

Her best stops came when she kept the game scoreless during the opening 10 minutes. Grace Zumwinkle found a lane to the net only to have her backhander from in tight stopped. Abbey Murphy failed on a breakaway chance when her shot from Ella caught Desbiens’ pad and bounced off the post.

“I don’t know the last time we put up that many shots against them. I think that’s something that we can take away, that we had the puck a lot of the game,” Amanda Kessel said. “Just got to find a way to put more in the net than them.”

The US is further hampered playing without top-line center Brianna Decker, who broke her left ankle in a 5-2 win over Finland on Thursday.

Zumwinkle’s status is in question after she appeared to hurt her hand in the closing minutes on Tuesday.

NOTES: The four goals allowed by the US matched a team Olympic record, dating to a 7-4 win over Canada in the cross-border rivals’ first Olympic meeting at the 1998 Nagano Games. … With two goals and nine assists for 11 points, Canada’s Natalie Spooner is tied for a second with fellow Canadians Caroline Ouellette (2010) and Hayley Wickenheiser (2010) and for most assists in one tournament. Wickenheiser holds the record with 12, set in 2006. … Canada hosts Sweden in the other quarterfinal on Friday, while on Saturday, Finland plays Group B champion Japan and Switzerland plays the Russian team.