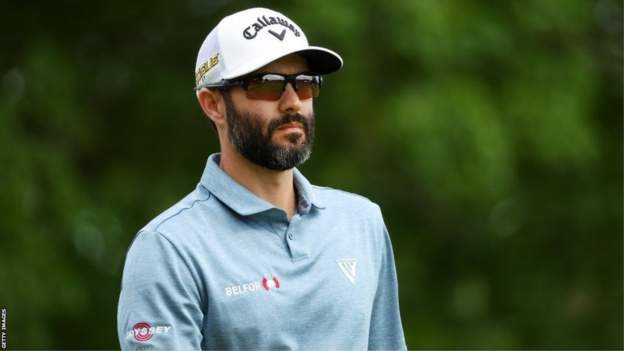 Rory McIlroy and England’s world number 445 Callum Tarren are in a group one shot behind US Open first-round leader Adam Hadwin at Brookline in Boston.

Canadian Hadwin carded six birdies to lead after a four-under-par 66.

McIlroy bogeyed the last, while Tarren eagled the eighth as they finished on three under, alongside David Lingmerth, Joel Dahmen and MJ Daffue.

England’s Matt Fitzpatrick and Justin Rose are two under, one ahead of last year’s winner Jon Rahm who shot a 69.

Benign morning conditions at Brookline saw 16 of the early wave finish under par, and that total increased to 25 with some fine performances from the afternoon starters in breezier conditions.

Just four strokes covers the top 41 players on a congested leaderboard, that includes world number one Scottie Scheffler who finished with two birdies to sign for a level-par 70.

Dustin Johnson, the 2016 US Open champion shot a 68 but fellow LIV Golf competitor Phil Mickelson had a day to forget after slumping to an eight-over 78.

Both players have been suspended by the PGA Tour for joining the new LIV Golf series, although the United States Golf Association, which runs the US Open, has allowed them to compete this week.

Six-time US Open runner-up Mickelson endured a miserable round on his 52nd birthday. He had just one birdie against five bogeys and two double bogeys to leave him struggling to make the cut in the only major he is yet to win.

Hadwin’s 66 is his lowest score in a major in 63 rounds, and the first time the 34-year-old has led after any round of any of men’s golf’s four biggest tournaments.

A flurry of five birdies in six holes on the front nine saw Hadwin hit the turn in 31, and he held on nicely down the tougher back nine with just one birdie and one bogey seeing him end the day at the top of the leaderboard.

“I was at ease, which is a nice feeling at the US Open as it doesn’t happen very often,” Hadwin told Sky Sports after his round.

“I had a good run there on the front nine but I knew there would be some tough holes coming home so it was just a case of hanging on.”

McIlroy arrived in Massachusetts full of confidence after winning a second successive Canadian Open on the PGA Tour on Sunday – and maintained his form with a solid round.

The Northern Irishman was leading on four under after 17 holes but missed the ninth green, his final hole of the day, and failed to get up-and-down from greenside rough to save his par.

It still represents a second consecutive strong start in a major for McIlroy, who shot 65 in the first round to lead the US PGA Championship last month before finishing eighth behind winner Justin Thomas.

“I’m feeling comfortable with my game,” the 33-year-old said. “Mentally I’m in a good place, which I think I showed out there with some of the par saves I made.”

Sheffield’s Fitzpatrick followed his fine showing of fifth at the US PGA Championship with a steady round of 68, but he walked off disappointed after also dropping a shot on his final hole.

The highlight of Fitzpatrick’s round was a chip-in birdie on the par-four 12th, one of five birdies in his round.

“I’ve got great memories of the place, and the whole time I’ve been out, I see shots that I hit and I see the places I was,” said the 27-year-old who won the US Amateur title at Brooklyn in 2013.

“I think because of that I’m a bit more at ease. I’m just trying not to put any pressure on myself. It’s a golf course I know I can do well around, and I’m just trying to enjoy it. “

Englishman Rose won the 2013 US Open on a similar type of course at Merrion Golf Club, and he is right in the mix again after his eventful round of 68.

Rose had just one par on his front nine, with three bogeys and five birdies – including one on the 17th that was similar to American Justin Leonard’s infamous putt in the 1999 Ryder Cup.

Leonard holed a 40-footer that effectively regained the trophy but the raucous celebrations were widely pilloried in both the US and European media after players and their wives ran across the line of Jose Maria Olazabal’s putt.

Once the bedlam had died down, Olazabal missed his putt, which guaranteed the US the half point they needed to win. Many European players suffered abuse that day and such was the ill feeling that the event was labeled the ‘Battle of Brookline’.

Rose admitted that his celebration was “100% Justin Leonard vibe.”

He added: “I was reading the putt, and I was, like, this is the putt Justin Leonard had. It went in with Justin Leonard’s speed. I don’t know if the camera stayed on me long enough, but I kind of had my hands in the air.

“I was going to run for a little longer like he did. It’s a little nod to Justin, but yeah, just trying to expel some European memories there.”

One of the first players to finish was Tarren, who surprised everyone with a fine back nine propelling him to a 67.

Starting on the 10th hole, he played his first nine holes in one over par but birdied the first, fifth and seventh before an eagle on the eighth sent him out in front.

Tarren is playing his first season on the PGA Tour and appearing in just his second US Open after also playing at Pebble Beach in 2019.

The Darlington golfer qualified at Rattlesnake Point GC in Ontario, Canada, to take his place in the 156-strong field in Boston.

After also playing the Canadian Open, his clubs failed to make the same flight down to Massachusetts but finally arrived just before the event, which Tarren, 32, says he is fully enjoying.

“Every hole gets your attention. I’m loving being here this week,” he added.

“I’m excited with that start and let’s see what we can do with the rest of the week.”

Spain’s Rahm had to stay patient in an eventful first round that had a little bit of everything and almost got away from him after a fine start.

Rahm had three birdies in four holes on the front nine but struggled on the back nine and when one of several wayward iron shots cost him a bogey on 15, his frustration was evident.

However, the 27-year-old – who triumphed at Torrey Pines 12 months ago – kept his focus over the last two holes and dropped in a 21-foot birdie putt on the 18th to ensure he finished under par.

“That birdie on 18 was always going to change the energy of the round,” said Rahm. “I played really well the first seven holes, then when the wind picked up on the back nine, I struggled a bit.

“To make that birdie on 18 was pleasing because I hit a lot of bad iron shots the last 10 holes.”