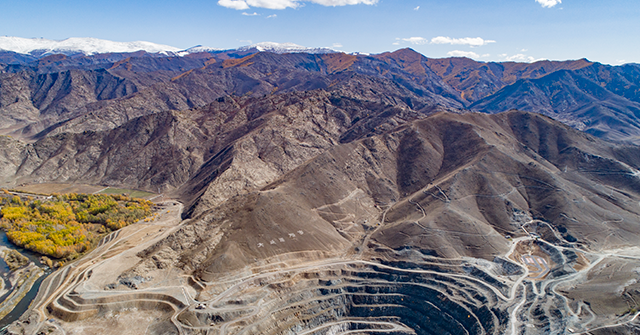 China’s state run Global Times on Thursday warned the United States could “spark World War III” by pushing too hard to decouple from the Chinese minerals industry by developing its own supply.

After a little throat-clearing and harrumphing about how “it’s reasonable for any country to diversify its supply chains that involve critical resources,” the Global Times said China would consider it tantamount to an act of war if the US diversifies too much because Beijing sees decoupling as preparation for “an all-out conflict” with America’s “strategic competitors” that could escalate into “World War III.”

In the eyes of the Chinese Communist Party, the US and its NATO allies could have no plausible reason for decoupling from peaceful China except “anxiety” that they would lose their supply of precious minerals by starting a war.

the Global Times was particularly agitated by US moves to secure alternate supplies of antimony, a mineral that is “critical to the defense-industrial supply chain and is needed to produce everything from armor-piercing bullets and explosives to nuclear weapons as well as sundry other military equipment, such as night vision goggles.”

“Antimony is now on the front line of recent congressional efforts to shore up the strategic reserve of rare earth minerals, known as the national defense stockpile. The stockpile includes a multitude of other minerals critical to the defense-industrial supply chain such as titanium, tungsten, cobalt and lithium, and lawmakers expect this to become insolvent by fiscal 2025 without corrective action,” the Chinese propagandists mused darkly.

Washington is using NATO to prepare for an all-out conflict with its strategic competitors, which could spark World War III, said analysts, as the US is pushing decoupling or reducing reliance on China in fields like critical mineral resources. https://t.co/uSTexNdkTb

Immediately after describing US efforts to diversify its mineral supply chain as an act of war, the Global Times breezily reassured itself that nothing America does could “have a significant impact on the Chinese industry,” since so many of its customers are in Southeast Asia.

Furthermore, the US supposedly cannot compete with China’s rare-earths industry, which is “very mature in terms of purification, cost control, and capacity management.”

“Fixing ties with China and making joint efforts to strengthen cooperation is less costly than pushing decoupling, and the problem is the US is driven by a problematic strategic mentality,” the Chinese Communist paper huffed, restating a thesis that only plans for a war against China could explain why the US and Europe would be willing to absorb the high cost of competition.

The true source of the Global Times’ anxiety was revealed at the end of its article when it took special umbrage at suggestions the US can diversify its supply chain by stepping up cooperation with antimony-rich nations in the Chinese-Russian orbit such as Tajikistan and Kyrgyzstan.

“China, Russia and Central Asian countries should be careful of such intentions from the US,” the Global Times shrieked, warning that partnership with America will only lead to “chaos via measures like color revolutions.”

The Chinese paper was right about one thing: the US House Armed Services Committee did indeed notice that America’s military is heavily reliant upon Chinese mineral supplies to manufacture its ammunition.

House Armed Services has proposed legislation to create a better supply chain that would be less vulnerable to disruption by the hostile governments in Beijing and Moscow, which are currently the Number 1 and 2 suppliers of antimony. Tajikistan is Number 3, and US analysts believe its production could be increased enough to break China’s stranglehold on the market.