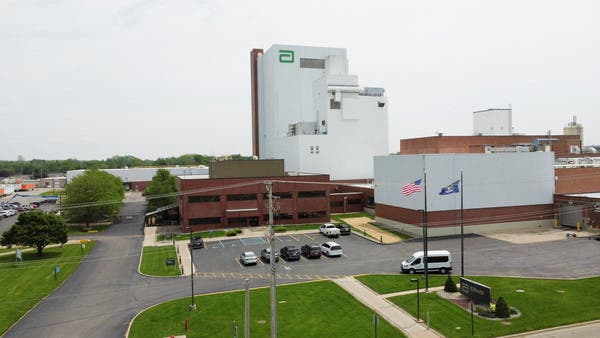 Abbott Nutrition has once again shut down a baby formula plant, this time due to heavy rains and flooding, less than two weeks after it reopened to try and mitigate a crippling US shortage.

The facility in Sturgis, Michigan resumed production on June 4, only to close down again earlier this week so the company could assess rain damage.

Severe thunderstorms that battered southwestern Michigan on Monday resulted in “high winds, hail, power outages and flood damage,” as well as “flooding in parts of the city, including areas of our plant,” Abbott said in a statement posted to their website Wednesday night.

“As a result, Abbott has stopped production of its EleCare specialty formula that was underway to assess damage caused by the storm and clean and re-sanitize the plant,” the statement said.

“This will likely delay production and distribution of new product for a few weeks.”

The plant, a major producer of formula, shut down in February and issued a product recall after the death of two babies raised concerns about contamination.

That worsened to a widespread formula shortage caused by supply issues, which was particularly concerning to parents of infants with allergies or with certain metabolic conditions, who desperately scoured stores and online sources for the specialized formulas.

The crisis prompted President Joe Biden last month to bring in a formula from Europe on commercial plans contracted by the US military. He also invoked the Defense Production Act to give baby formula manufacturers first priority in supplies.

Abbott, which controls about 40 percent of the US baby food market, had announced its hypoallergenic EleCare formula and should be back on store shelves around June 20.

In the statement Wednesday, the manufacturer assured consumers that it had “ample existing supply” of EleCare and most of its other specialty formulas to meet demand until production could resume again.

The formula shortage, coming at a time when soaring inflation and supply-chain delays have fanned a growing sense of unease among many American families, and Biden critics have seized on the situation to question the competence of his administration.