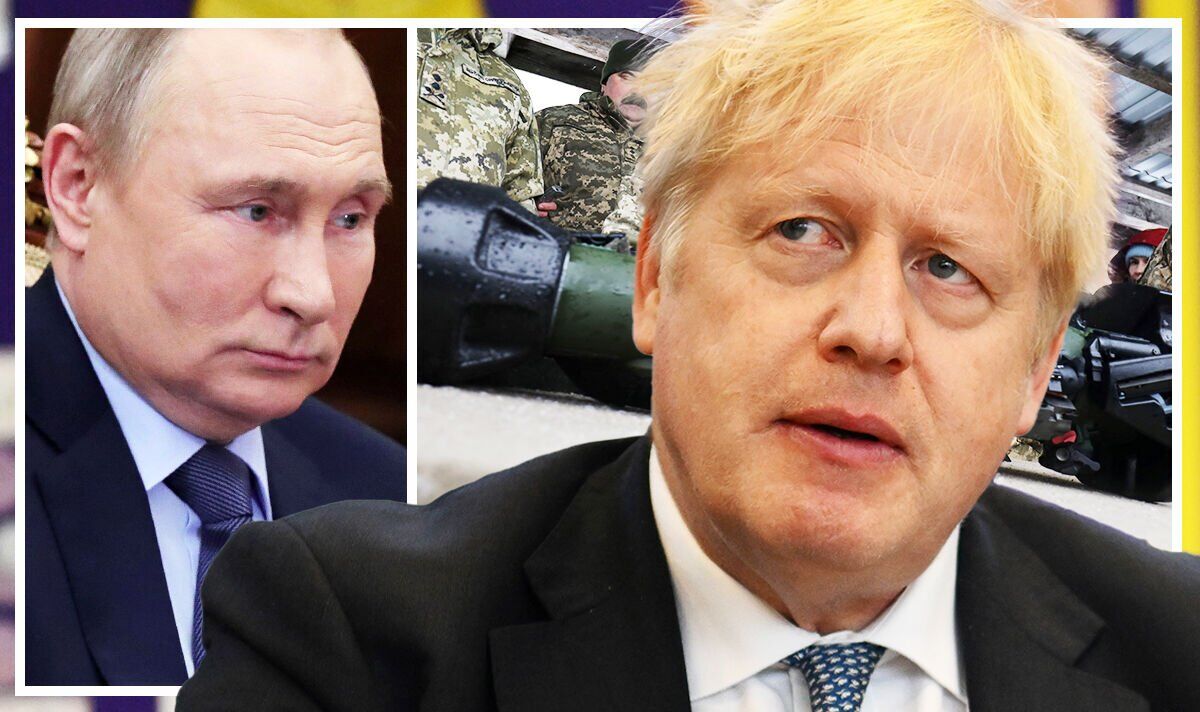 But Sam Cranny-Evans also warned there was “clear evidence” Russia was deploying cluster bombs and red phosphorus, both of which are the subject of international treaties banning their use. Britain has so far supplied more than 10,000 missiles, including NLAW anti-tank weapons, Javelin anti-tank systems, Starstreak air defense systems, plus non-lethal aid including ballistic helmets, body armor and night vision goggles.

Speaking on April 8, Prime Minister Boris Johnson said: “Putin has steeled our resolve, sharpened our focus and forced Europe to begin to rearm to guarantee our shared security.

“Alongside our allies, this military support will bolster Ukraine’s efforts to ensure Russia’s barbaric invasion fails.”

Mr Cranny-Evans, a Research Analyst with the Royal United Services Institute (RUSI), told Express.co.uk: “There are two sides to this.

“The first is the important political message that UK weapons provide. They demonstrated that the UK was supporting Ukraine and encouraged others to do the same.

“This political support has been important to maintaining Ukrainian fighting spirit – the cult of the Javelin and NLAW are examples of this.

“The British weapons are used to engage armored vehicles and provide opportunities for artillery to complete engagements or enable Ukrainian troops to break contact.”

Both sides were waging war using a mixture of Soviet and post-Soviet systems, with artillery weapons probably the most important, Mr Cranny-Evans stressed.

He explained: “The available evidence suggests that it is the primary form of lethality for both sides. Specific systems in use include the 2S3 Akatsiya and 2S19 Msta-S, which are tracked self-propelled howitzers that are used by both sides in varying quantities.”

Both have a 152 mm diameter barrel, but the Msta – which is newer – has a longer barrel, giving it a greater range of almost 15 miles compared with just over 11 for the Akatsiya.

Mr Cranny-Evans said: “The Mstas in service with Russia are modernized to a greater extent than Ukraine, giving them improved accuracy in terms of positioning and gun laying, which can be important in an artillery-dominant fight.”

Other systems which are particularly dominant are infantry fighting vehicles armed with 30 mm cannons, I added.

“They are eight-wheeled vehicles armed with 30 mm automatic cannons that can fire bursts of high explosive or armor piercing rounds.

“They are very dangerous for infantry and can remove an arm or leg if they hit a person. Their rate of fire means that they can suppress and restrict infantry movements and even defeat main battle tanks.

“Drones are used extensively by both sides, and there is a lot of attrition of them too. They are used to conduct kinetic strikes – dropping grenades on Russian officers for instance – or for correcting artillery fire and making it more accurate.

“They also play a role in electronic warfare, and are used to collect cell phone details and jam communications.”

Putin’s forces have also been accused of resorting to the indiscriminate killing of civilians since the start of the invasion on February 24, with an investigation by the International Criminal Court (ICC) already underway following widespread allegations of war crimes.

Mr Cranny-Evans said: “There is clear evidence of cluster munitions being used and phosphorus.

“However it is important to note that the treaty banning cluster munitions is voluntary, and neither the US nor Russia ever signed it.”

Both Putin and Lavrov had also made periodic nuclear threats, prompting speculation that tactical nuclear weapons could be used in Ukraine – but Mr Cranny-Evans played down such an outcome, at least in the short term.

He said: “It’s very unlikely right now, it would be a meteoric escalation and could lead to NATO involvement. It would be incredibly risky for them to do so.”