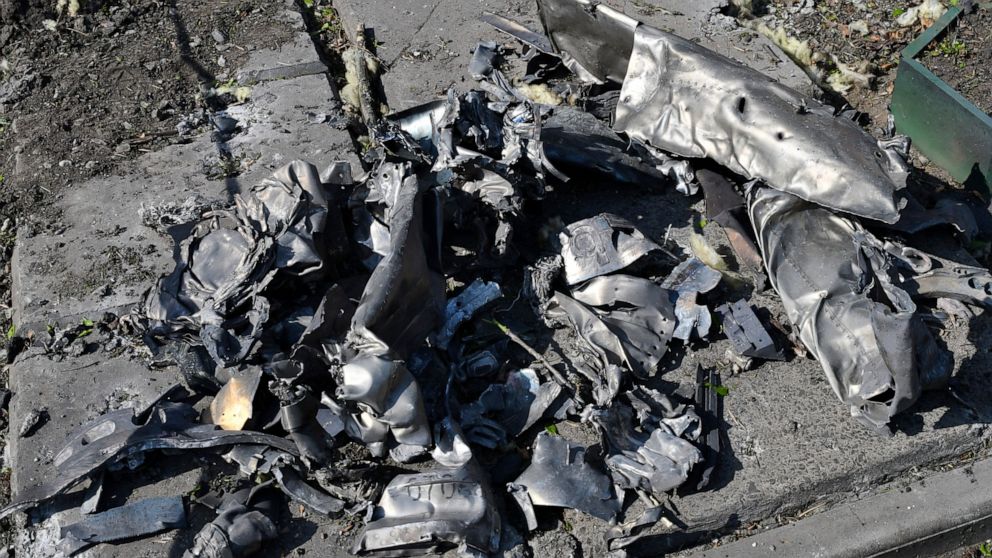 ZAPORIZHZHIA, Ukraine — More civilians have been rescued from the tunnels under a besieged steel plant in Mariupol, a Ukrainian official said Friday, even as fighters holed up at the sprawling complex made their last stand to prevent Moscow’s complete takeover of the strategic port city .

The fight in the last Ukrainian stronghold of a city reduced to ruins by the Russian onslaught appeared increasingly desperate amid growing speculation that President Vladimir Putin wants to finish the battle for Mariupol so he can present a triumph to the Russian people in time for Monday’s Victory Day , the biggest patriotic holiday on the Russian calendar.

Some 2,000 Ukrainian fighters, by Russia’s most recent estimate, are holed up in a vast maze of tunnels and bunkers beneath Azovstal steelworks — and they have repeatedly refused to surrender. Ukraine said a few hundred civilians were also trapped there — and as the battle has ramped up in recent days, fears for their safety have only grown.

“We conducted another stage of a complex operation to evacuate people from Mariupol and Azovstal. I can say that we managed to take out almost 500 civilians,” the head of Ukraine’s presidential office, Andriy Yermak, said Friday on the Telegram messaging app.

It was not clear if that figure referred entirely to new evacuations or included around 100 who were rescued over the weekend in a United Nations-assisted operation. It was also not clear how many might be left underground, but UN Secretary-General Antonio Guterres said Thursday that the organization “must continue to do all we can to get people out of these hellscapes.”

People escaping Mariupol typically have to pass through contested areas and many checkpoints — sometimes taking days to reach relative safety in the Ukrainian-controlled city of Zaporizhzhia, about 140 miles (230 kilometers) to the northwest.

Ahead of Victory Day — which marks the Soviet Union’s triumph over Nazi Germany — municipal workers and volunteers cleaned up what remains of Mariupol, a city that is now under Russia’s control apart from the steel plant. Bulldozers scooped up debris and and people swept streets—with a backdrop of buildings hollowed out by shelling. Workers repaired a model of warship, and Russian flags were hoisted on utility poles.

The fall of Mariupol would deprive Ukraine of a vital port, allow Russia to establish a land corridor to the Crimean Peninsula, which it seized from Ukraine in 2014, and free up troops to fight elsewhere in the Donbas, the eastern industrial region that the Kremlin says is now its chief objective. Its capture also holds symbolic value since the city has been the scene of some of the worst suffering of the war and a surprisingly fierce resistance.

While they pounded away at the plant, Russian forces struggled to make significant gains elsewhere, 10 weeks into a devastating war that has killed thousands of people, forced millions to flee the country and flattened large swaths of cities.

The Ukrainian military’s General Staff said Friday that its forces repelled 11 attacks in the Donbas and destroyed tanks and armored vehicles, further frustrating Putin’s ambitions after his abortive attempt to seize Kyiv. Russia gave no immediate acknowledgment of those losses.

Ukrainian chief of defense, Gen. Valerii Zaluzhnyi, meanwhile, said Thursday that a counteroffensive could begin to push Russian forces away from Kharkiv and Izyum — two cities key to the Russian campaign in the Donbas, where Moscow-backed separatists have been fighting Ukrainian troops for eight years. Already, Ukrainian fighters have driven Russian troops some 40 kilometers (25 miles) east of Kharkiv in recent days.

The goal could be to push the Russian out of the artillery range of the city, which has been pummeled by strikes, as well as forcing Moscow to divert troops from other areas of the front line, according to an assessment from the Washington-based Institute for the Study of War on Thursday.

Pentagon spokesman John Kirby said Russian forces are making only “plodding” progress in the Donbas, while the institute said their operations there were “ineffectual” and had not secured any significant territorial gains in the preceding 24 hours.

In fact, the extended standoff at the plant in Mariupol was helping to hinder Russia’s plans for the Donbas, the British Defense Ministry said in an assessment on Friday.

The fighting at the plant “has come at personnel, equipment and munitions cost to Russia,” it said. “While Ukrainian resistance continues in Avozstal, Russian losses will continue to build and frustrate their operational plans in southern Donbas.”

The Ukrainians say Russian troops have stormed the steelworks and are also striking it from the air, but the wife of one commander at the plant said they had vowed to “stand till the end.”

“They won’t surrender,” Kateryna Prokopenko said Thursday after speaking by phone to her husband, Denys Prokopenko. “They only hope for a miracle.”

“There are many wounded (fighters), but they are not surrendering,” he said. “They are holding their positions.”

“Just imagine this hell! And there are children there,” he added. “More than two months of constant shelling, bombing, constant death.”

The Russians have pulverized much of Mariupol, which had a prewar population of over 400,000, and a two-month siege that has trapped perhaps 100,000 civilians with little food, water, electricity or heat. Civilians sheltering inside the plant have perhaps suffered even more — hunkering underground without seeing daylight in months.

The Russians managed to get inside the plant Wednesday with the help of an electrician who knew the layout, said Anton Gerashchenko, an adviser to Ukraine’s Internal Affairs Ministry.

“He showed them the underground tunnels which are leading to the factory,” Gerashchenko said in a video.

The Kremlin has denied its troops were storming the plant, and Russia has also accused the fighters of preventing the civilians from leaving.

More than 100 civilians were rescued from the steelworks over the weekend. But many previous attempts to open safe corridors from Mariupol have failed through, with Ukraine blaming shelling and firing by the Russians.

On Thursday, an American official said the US shared intelligence with Ukraine about the location of a Russian flagship before the mid-April strike that sank it, one of Moscow’s highest-profile failures in the war.

The US has provided “a range of intelligence” that includes locations of warships, said the official, who was not authorized to speak publicly and spoke on condition of anonymity. The official said the decision to target the missile cruiser Moskva was purely a Ukrainian decision.

Follow AP’s coverage of the war in Ukraine: https://apnews.com/hub/russia-ukraine