One fighter killed and six others wounded when Russian forces opened fire during a ceasefire to evacuate civilians from Mariupol, local officials claim.

Local authorities in Mariupol have accused Russian forces of opening fire on a car on its way to evacuate civilians from the besieged Azovstal steelworks, in violation of a truce agreement.

“During the ceasefire on the territory of the Azovstal plant a car was hit by Russians using an anti-tank guided weapon,” Mariupol City Council said in an online post on Friday, alleging one Ukrainian fighter was killed and six others wounded in the incident .

“The enemy continues to violate all agreements and fails to adhere to security guarantees for the evacuation of civilians,” it added.

There was no immediate reaction to the council’s claim from Moscow. Al Jazeera was unable to independently verify the report.

Russia offered a ceasefire to allow the evacuation of civilians trapped in the Azovstal plant, where Ukrainian fighters are making a last stand in a bid to prevent Moscow from a complete takeover of Mariupol, a key port city in Ukraine’s southeast.

Andriy Biletsky, a founder of the Azov Battalion that is present in the steelworks, said the site was under renewed attack on Friday and appealed for help with evacuations.

“The shelling does not stop,” Biletsky said in an online post in which he also called for a petition to be drawn up to increase pressure on the United Nations and global leaders to help evacuate fighters as well as civilians.

“Every minute of procrastination is the life of civilians, soldiers and the wounded,” he added.

The developments came after a Ukrainian official confirmed earlier on Friday that more civilians had been rescued from the tunnels under the sprawling, Soviet-era Azovstal plant on Thursday.

Andriy Yermak, the head of Ukraine’s presidential office, said in a post on the Telegram messaging app that authorities had “conducted another stage of a complex operation to evacuate people from Mariupol and Azovstal”.

“I can say that we managed to take out almost 500 civilians,” he said, confirming an earlier figure provided by UN Secretary-General Antonio Guterres. 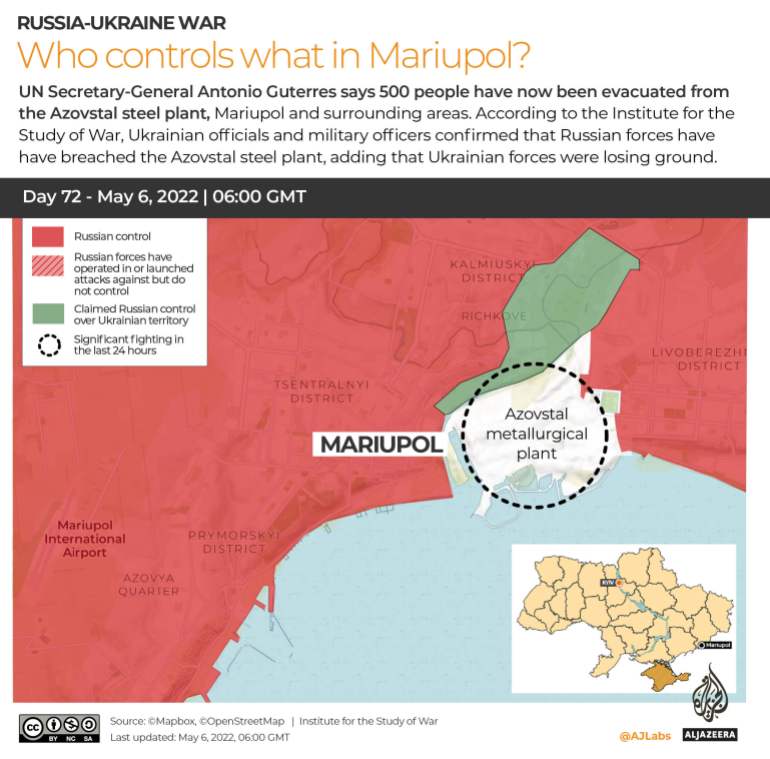 People escaping Mariupol typically have to pass through contested areas and many checkpoints – sometimes taking days to reach relative safety in the Ukrainian-controlled city of Zaporizhzhia, about 230km (140 miles) to the northwest.

More than 100 civilians bunkered under the steelworks were rescued last weekend in an earlier UN-assisted operation.

It was not immediately clear how many civilians were left underground at the steelworks following the evacuation efforts.

Ukraine had previously put the number trapped there at several hundred and as the battle for control of the site has ramped up in recent days, fears for their safety have grown.

Meanwhile, about 2,000 Ukrainian troops, by Russia’s most recent estimate, remain holed up in a vast maze of tunnels and bunkers beneath the steelworks.

The fighters have repeatedly rejected demands from Moscow to surrender.

The fall of Mariupol would be a key development in the war as it would deprive Ukraine of a vital port, allow Russia to establish a land corridor to the Crimean Peninsula, which it seized from Ukraine in 2014, and free up troops to fight elsewhere in the eastern Donbas region, which the Kremlin has refocused its offensive on.

Its capture also holds symbolic value since the city has been the scene of some of the worst fighting of the war and a dogged resistance effort.

Elsewhere in Ukraine, Russian troops have struggled to make significant gains, 10 weeks into a devastating war that has killed thousands of people, if not more, forced millions to flee the country and flattened large swaths of cities.

The Ukrainian military’s General Staff said on Friday that its forces had repelled 11 attacks in the Donbas and destroyed tanks and armored vehicles, further frustrating Russian President Vladimir Putin’s ambitions after his aborted attempt to seize Kyiv earlier in the conflict.