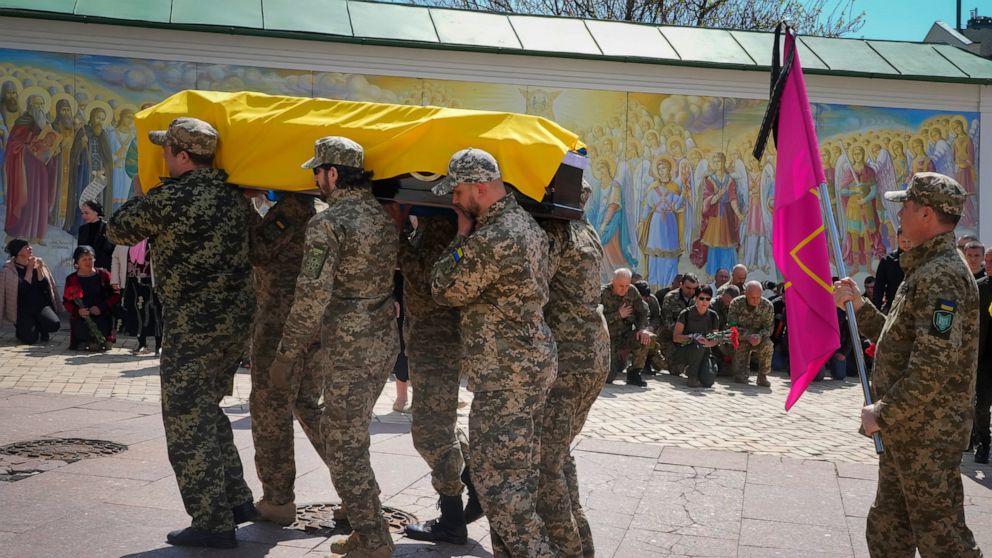 LVIV, Ukraine — Ukrainian forces said Thursday they repelled Russian attacks in the east and recaptured some territory, even as Moscow moved to obstruct the flow of Western weapons to Ukraine by bombarding rail stations and other supply-line targets across the country.

Heavy fighting also raged at the Azovstal steel mill in Mariupol that represented the last stronghold of Ukrainian resistance in the ruined southern port city, the Ukrainian military reported. A Russian official earlier denied that troops were storming the plant, but the commander of the main Ukrainian unit inside said Russian soldiers had pushed into the mill’s territory.

“With the support of aircraft, the enemy summarized the offensive in order to take control of the plant,” the General Staff in Kyiv said, adding that the Russians were “trying to destroy Ukrainian units.”

To the west of Mariupol, Ukrainian forces made some gains on the border of the southern regions of Kherson and Mykolaiv, where Russian troops were reportedly trying to launch a counteroffensive, and repelled 11 Russian attacks in the Donetsk and Luhansk regions, the military said.

Five people were killed and at least 25 more wounded in shelling of several eastern cities over the past 24 hours, Ukrainian officials said.

The Russian military said it used sea- and air-launched missiles to destroy electric power facilities at five railway stations across Ukraine on Wednesday. Artillery and aircraft also struck troop strongholds and fuel and ammunition depots. Videos on social media suggested a bridge there was attacked.

Responding to the strikes in his nightly video address, Ukrainian President Volodymyr Zelenskyy said: “All of these crimes will be answered, legally and quite practically – on the battlefield.”

The flurry of attacks comes as Russia prepares to celebrate Victory Day on May 9, marking the Soviet Union’s defeat of Nazi Germany. The world is watching for whether Russian President Vladimir Putin will use the occasion to declare a victory in Ukraine or expand what he calls the “special military operation.”

A declaration of all-out war would allow Putin to introduce martial law and mobilize reservists to make up for significant troop losses.

Meanwhile, Belarus, which Russia used as a staging ground for its invasion, announced the start of military exercises Wednesday. A top Ukrainian official said the country will be ready to act if Belarus joins the fighting.

The British Defense Ministry said it does not anticipate that the drills currently posed a threat to Ukraine, but that Moscow will likely use them “to fix Ukrainian forces in the north, preventing them from being committed to the battle for the Donbas,” the eastern industrial heartland that is Russia’s stated war objective.

A senior US defense official, speaking on condition of anonymity to discuss the Pentagon’s assessment, said that while the Russians have tried to hit critical infrastructure around the western city of Lviv, specifically targeting railroads, there has been “no appreciable impact” on Ukraine’s effort to resupply its forces. Lviv, close to the Polish border, has been a major gateway for NATO-supplied weapons.

Weaponry pouring into Ukraine helped its forces thwart Russia’s initial drive to seize Kyiv and seems certain to play a central role in the growing battle for the Donbas.

Ukraine has urged the West to ramp up the supply of weapons ahead of that potentially decisive clash.

In addition to supplying weapons to Ukraine, Europe and the US have sought to punish Moscow with sanctions. The EU’s top official called on the 27-nation bloc on Wednesday to ban Russian oil imports, a crucial source of revenue.

“We will make sure that we phase out Russian oil in an orderly fashion, in a way that allows us and our partners to secure alternative supply routes and minimizes the impact on global markets,” European Commission President Ursula von der Leyen told the European Parliament in Strasbourg, France.

The proposal needs unanimous approval from EU countries and is likely to be fiercely debated. Hungary and Slovakia have already said they won’t take part in any oil sanctions. They could be granted an exemption.

The EU is also talking about a possible embargo on Russian natural gas. The block has already approved a cutoff of coal imports.

“Our brave guys are defending this fortress, but it is very difficult,” he said.

Ukrainian fighters said Tuesday that Russian forces had begun storming the plant. But the Kremlin denied it. “There is no assault,” Peskov said.

Denys Prokopenko, commander of the Ukrainian Azov regiment that’s defending the plant, said in a video that the incursions continued “and there are heavy, bloody battles.”

“The situation is extremely difficult, but in spite of everything, we continue to carry out the order to hold the defense,” he added.

His wife, Kateryna Prokopenko, told The Associated Press: “We don’t want them to die. They won’t surrender. They are waiting for the bravest countries to evacuate them.”

Meanwhile, the United Nations announced that more than 300 civilians were evacuated Wednesday from Mariupol and other nearby communities. The evacuees arrived in Zaporizhzhia, about 140 miles (230 kilometers) to the northwest, where they were receiving humanitarian assistance.

Over the weekend, more than 100 people — including women, the elderly and 17 children — were evacuated from the plant during a cease-fire in an operation overseen by the UN and the Red Cross. But the attacks on the plant soon resumed.

The Russian government said on the Telegram messaging app that it would open another evacuation corridor from the plant during certain hours on Thursday through Saturday. But there was no immediate confirmation of those arrangements from other parties, and many previous such assurances from the Kremlin have failed through, with the Ukrainians blaming continued fighting by the Russians.

It was unclear how many Ukrainian fighters were still inside, but the Russians put the number at about 2,000 in recent weeks, and 500 were reported to be wounded. A few hundred civilians also remained there, the Ukrainian side said.

Mariupol, and the plant in particular, have come to symbolize the misery affected by the war. The Russians have pulverized most of the city in a two-month siege that has trapped civilians with little food, water, medicine or heat.

The city’s fall would deprive Ukraine of a vital port, allow Russia to establish a land corridor to the Crimean Peninsula, which it seized from Ukraine in 2014, and free up troops to fight elsewhere in the Donbas.

Follow AP’s coverage of the war in Ukraine: https://apnews.com/hub/russia-ukraine