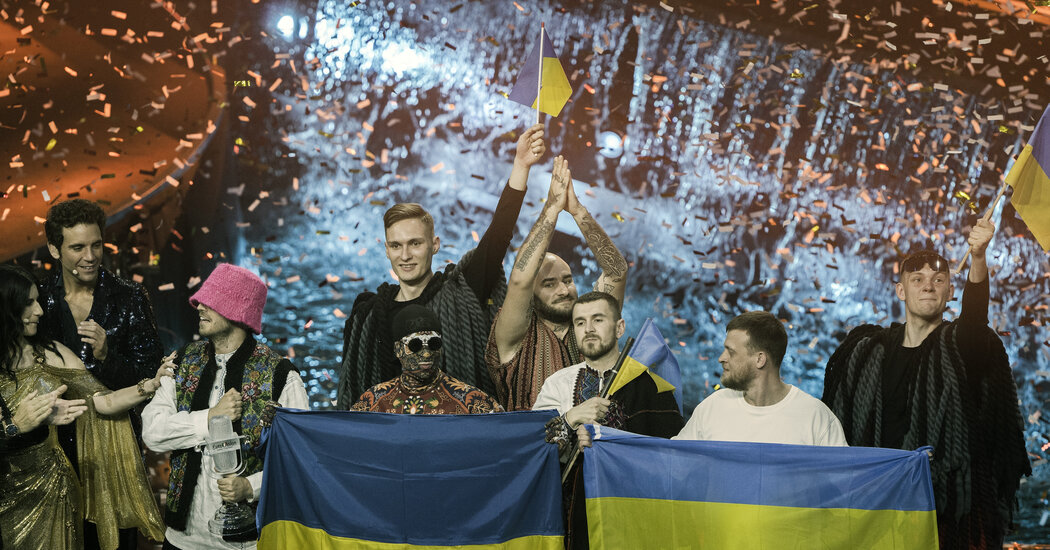 Kalush Orchestra, a Ukrainian rap act, gave a huge morale boost last month to its war-torn country by cruising to victory at the Eurovision Song Contest — the world’s most watched and glitziest song contest.

That win, with the song “Stefania,” meant that Ukraine also won the right to stage the next contest, scheduled for May 2023. But Eurovision’s organizers announced on Friday that would not be possible.

The organizers, the European Broadcasting Union, said in a news release that it had concluded “with deep regret” that Russia’s continuing invasion of Ukraine meant that Ukraine could not provide “the security and operational guarantees” needed to host the event, which sees musicians representing countries from across Europe compete against each other for points.

The European Broadcasting Union said it would instead start discussions with the BBC about hosting the event in Britain because Britain’s Sam Ryder came second in last month’s contest.

The BBC confirmed in an emailed statement that it would enter those discussions. “Clearly,” it said, “these aren’t a set of circumstances that anyone would want.”

Ukraine’s public broadcaster, UA: PBC, said in a news release that it was “disappointed” with the decision. Mykola Chernotytskyi, head of its managing board, said, “a large number of people in Ukraine have thrown all their efforts to fulfill the conditions for holding Eurovision in our country.”

That included offering three potential locations for the event some far from current fighting: Lviv, in western Ukraine; the Zakarpattia region which borders Hungary and Slovakia; and the capital, Kyiv. “We ask our partners to hold further negotiations,” Chernotytskyi said.

Wherever the event is staged, Kalush Orchestra is likely to feature. “It is our full intention that Ukraine’s win will be reflected in next year’s shows,” the European Broadcasting Union said. “This will be a priority for us in our discussions with the eventual hosts,” it added.

Kalush Orchestra did not immediately respond to a request for comment.

Ukraine has held the twice event before, most recently in 2017.