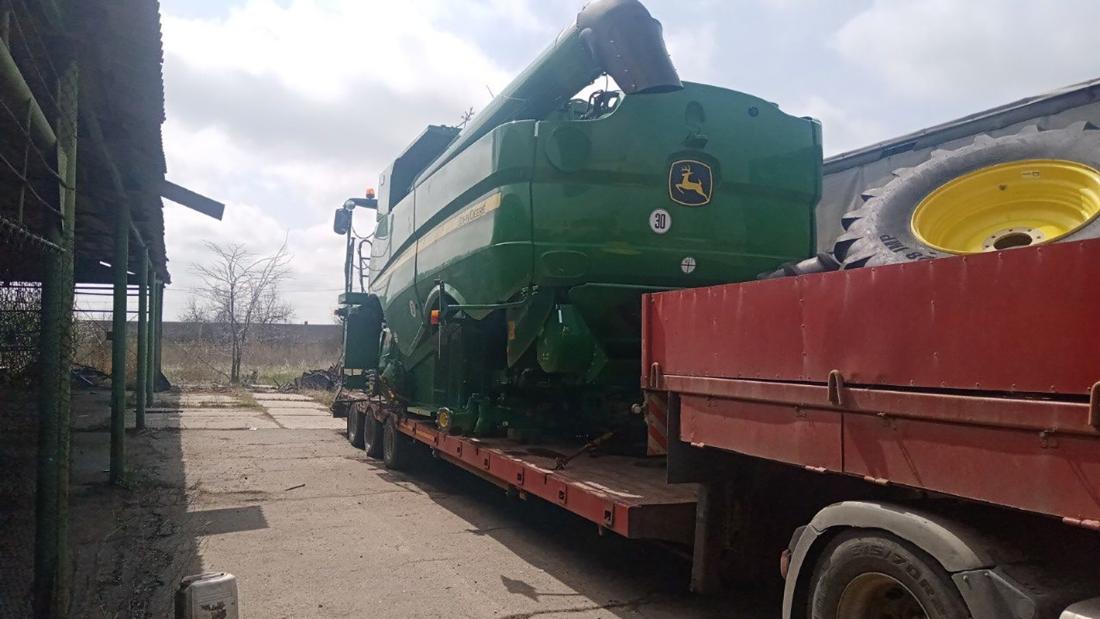 The actions of the Russian forces may threaten the harvest this year in one of the world’s most important grain-producing countries. The volumes involved are said to be huge.

Ukraine’s Defense Ministry said Thursday an estimated 400,000 tons of grain had been stolen to date.

Farmers and others in Kherson and Zaporizhzhia have provided CNN with details of multiple thefts.

In late April, Russian soldiers removed 1,500 tons of grain from storage units known as elevators in the Kherson village of Mala Lepetykha, using trucks with Crimean number plates. The next day, those same trucks — 35 in all – returned and emptied large storage units known as grain silos at nearby Novorajsk across the river Dnieper.

In Melitopol, an occupied city in Zaporizhzhia region, Mayor Ivan Fedorov shared a video with CNN that showed trucks — several bearing the “Z” sign of the Russian military — carrying grain towards Crimea. The main elevator in the city had been emptied.

A valuable commodity, looted on an ‘overwhelming scale’

Fedorov told CNN that the Russians “went around all the villages, every yard and looked for agricultural machinery, for grain, which they subsequently looted.”

“Chechen soldiers, fighting for Russia, act like criminals in the 1990s. First they offer to buy grain for a ridiculously low price. But if you don’t agree, they take everything from you for nothing.

“The scale of looting is simply overwhelming,” he said.

Agrarian Minister Mykola Solsky said a surge in thefts from farms had occurred in the last two weeks. Ukrainian officials say that occupying forces have warned farmers and businesses that if they report thefts to the police they and their families would be in danger.

For the occupiers, grain is an attractive commodity. The price of wheat is about $400 a ton on world markets and has moved sharply higher this year. It’s difficult to trace its origins and can be easily shipped.

Nivievskyi says countries in the Middle East are happy to buy Russian wheat, which they get at a 20% discount, and don’t care whether it’s really from Ukraine.

Echoes from another dark period in Ukraine’s history

For Ukrainians, the seizure of grain recalls a dark period in their history, when Stalin forcibly removed food stocks from Ukrainian peasants in the 1930s, leading to the deaths of millions of people. Known as Holodomor (to kill by starvation) it is considered an act of genocide by many Ukrainians.

The head of the Luhansk Regional Administration, Serhiy Hayday, says the Russians’ goal is another Holodomor.

The Russians now occupy about 90% of Luhansk’s farmland and have taken about 100,000 tons of grain from the region, he estimates.

Much of what they’ve not stolen has been destroyed. CNN spoke to Anatoliy Detochka, owner of Golden Agro, whose grain storage complex near Rubizhne was destroyed on April 14. It burned for two weeks.

The silo was only built two years ago at a cost of $5 million. Detochka told CNN when it was hit it contained about 17,000 tons of wheat and about 8,500 tons of sunflower seeds, worth altogether $13 million.

He is sure it was deliberately targeted because there are no other buildings in the area.

Detochka said at least two other elevators in the area were hit. CNN has obtained video of another grain silo being bombarded in Sylnelkove in Dnipro.

Hayday says there has been no sowing in Luhansk this spring “because the Russians are not interested. Why, if you can rob and secure yourself for several years to come?”

“If they know their grain is going to be seized, farmers may well say: ‘Here are the keys to the tractor, go collect the harvest yourself, if you want,'” says Agrarian Policy minister Solsky.

One official said that the Russians had only allowed farmers to sow in Kherson if they agreed to surrender 70% of the harvest for nothing. Most farmers had refused.

The threat of hunger and bankruptcy

Trofimtseva said she had similar stories from Zaporizhzhia and Kherson. She said she heard that Russians were “proposing they would buy for 10% of the real value. And if you do not agree, then they will expropriate it for free. This is not isolated cases. This is a system.”

The theft of grain on such a huge scale — combined with the dislocation of war — could affect world markets. Fedorov, the mayor of Melitopol, said: “If we do not harvest (the) next crop, the effect of hunger can be significant. And the main export route is ports which are currently blocked.”

Oleg Nivievskyi at the Kyiv School of Economics told CNN that the real risk is over years not months. Farmers are losing money and may go bankrupt, he says.

“Even if these regions are liberated tomorrow, it will take time to restart the production cycle,” perhaps two to three years. Buying fertilizer and equipment and hiring workers would be tough for farmers who have been cleaned out by the Russians — because their grain is their working capital for the next season.”

Detochka, the owner of the Rubizhne silo, agreed. “We mainly worked for export. Producers were waiting for good prices, waiting for spring, because a significant part of grain production is usually sold in spring.

“Today, almost all elevators in Ukraine are full because they can’t sell these products anywhere.”

CNN has previously reported on the theft of farm equipment, including sowers and harvesters, from a John Deere dealership in the city of Melitopol.

Video and images obtained by CNN since shows the equipment being loaded on flat-bed trucks for a 1,126 kilometer (720 mile) journey to Chechnya.

Olga Trofimtseva, a former agriculture minister in Ukraine, said she’d been told of similar thefts in Donetsk and Kharkiv. “Their equipment was simply stolen and pulled across the border — new tractors, harvesters. Unfortunately, this is their system.”

Further south, Vasiliy Tsvigun, saw decades of work building up his farm at Myrne in Zaporizhia wiped out. Tsvigun endured threats and robbery in early March, but decided to stay on his farm even as Russian forces closed in.

When they arrived, “they fired a burst from a machine gun above my head,” he said. “They threw me to the ground and took away our generator.”

Tsvigun said Russian forces were soon back and held him at gunpoint as they pillaged the house. After he escaped to Ukrainian-held territory, locals told him that all the fertilizer had been stolen as well as British-made agricultural loaders. He was able to track the long journey of one of them to Kursk in Russia, using GPS, he told CNN.

“They took away a new harvester, which was recently delivered to us. They took away the sowing complex, a large and expensive machine. And they overturned one of the tractors, driving around drunk. Now it’s lying in a ditch.” Tsvigun said.

As for his grain — 2,000 tons of it — Tsvigun said “most likely, they took it too. But about the harvesters, this is already a fact.”

“Russians live there now,” Vasiliy said with a tone of resignation. “No one can go there anymore.

Now that Ukrainian ports like Odesa are essentially closed to merchant traffic, farmers in areas still controlled by Ukraine face a logjam in exporting their grain.

There is a glimmer of hope. Some grain is now going by rail to Romania. At the end of April a freighter — the Unity N — left the Romanian port of Constanta, according to shipping sources, laden with 71,000 tons of Ukrainian grain.

CNN has learned that Romania is prepared to invest in railway improvements along the route and has issued a tender for the work. But exporting grain to the rest of Europe by rail is not easy because the rail networks have different track gauges, meaning not all trains can run on all railway lines.

In the meantime, many of Ukraine’s farmers face a bleak future, as do their consumers.

In Luhansk, “There is no bread now and it is not expected in the future,” says Hayday, recalling Holodomor. “The Russians will leave Ukrainians in the occupied territories on the brink of starvation.”

But Vasiliy Tsvigun, whose years of work have been ruined, isn’t thinking about his farm. “The main thing now is the victory of Ukraine.

“There will be a victory — we will rebuild everything.”