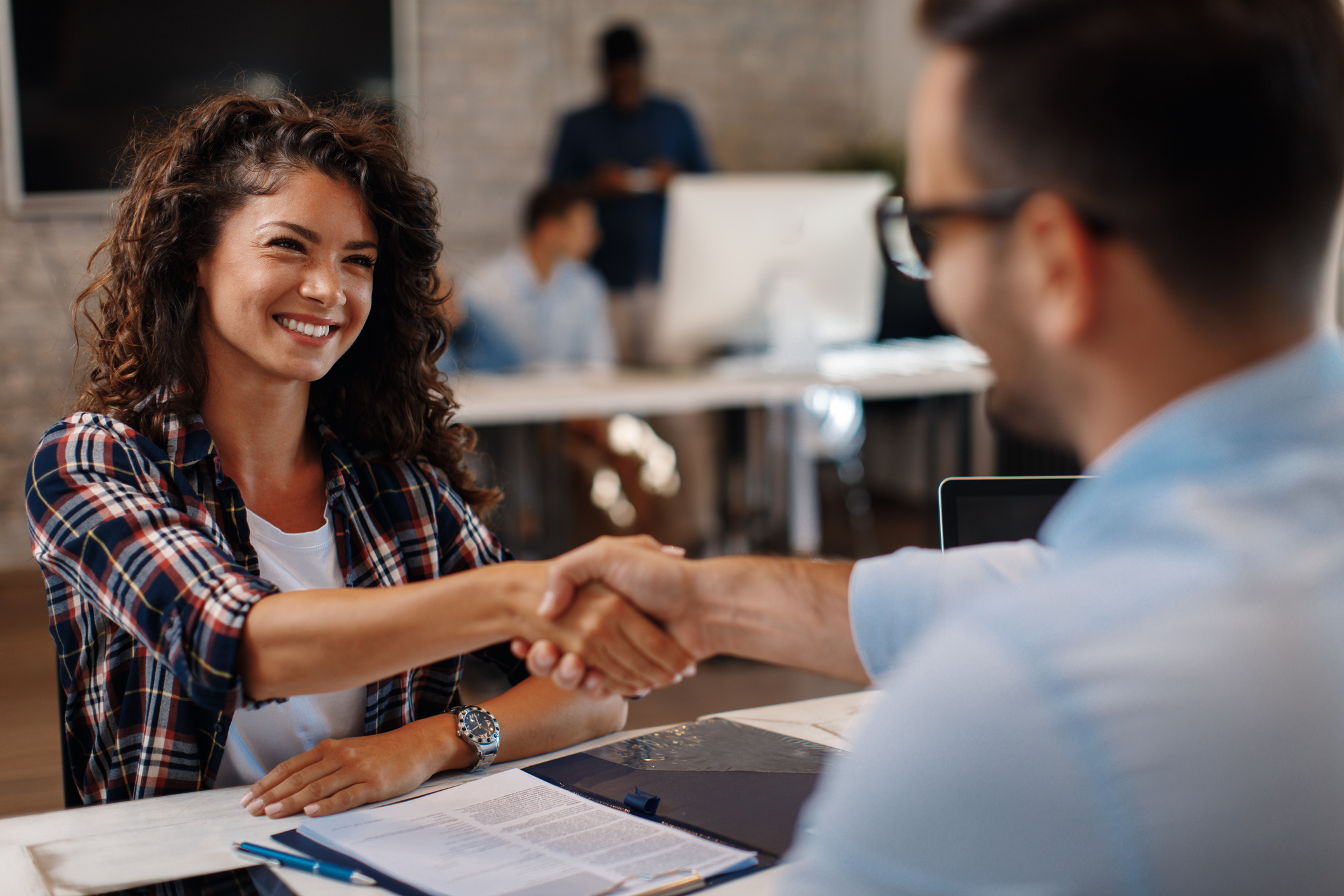 “Not preparing,” she said. “Just showing up and thinking they’re going to get this but not doing their research on the company. Research is the number one thing that you want to do. I’ve literally been asked in the middle of an interview. ‘What do you do here?’ You need to know what you’re walking into. The company wants to know that you’re interested.”

Communicating in an Interview

First impressions still count for a lot. Perkins recalled one interviewee who committed pretty much every cardinal sin in the book from the minute they got through the door.

“They came in, barely looked at me and kind of did this little, you could call it a handshake, but they barely touched the end of my fingers and did not make eye contact. Just looked down at the ground almost the entire time, she said.

Things got worse from there. “They kept looking at their resume,” she said. “It’s fine to bring a resume to reference but they literally spent the whole time looking down at their resume.”

As Perkins explained, a prospective employer will already be well aware of a candidate’s experience on paper. “They’re looking for a little bit more,” she said. ‘How do you communicate? This is an opportunity to really show what you have and take that to summarize a little deeper.”

The candidate had also clearly failed to prepare. When asked why they wanted to work there, she said they responded: “Well, I saw a job posting and I thought I would just go for it.” Worse still, they didn’t actually know what “it” was. “When I started talking about what we do, they were like ‘oh, gosh, I’m not sure if I want to do that,'” she said.

Perkins said it’s crucial candidates practice questions and think about their possible response with some candidates guilty of “rambling” to “fill the time.” She adds: “When somebody asks you why you want to work there? Don’t say ‘I just need a job.’ Why do you want to work for that organization? It has to be something better.”

There are more obvious things to avoid, like any use of profanity. “Even if the interviewer happens to use some of that language,” she said. “It can be offensive and I’ve seen the conversation quickly end as a result.”

Similarly, she recommends candidates avoid “trashing” their previous employer. “I was interviewing somebody, when I was the HR manager for a retailer,” Perkins said. “It was some coming from another retailer, and the person just started just going off about all the awful things about the HR, and these policies and all this stuff at this other retailer. Well, we were owned by the same company. So had the exact same HR policies.”

While confidence is “critical” to a successful interview, Perkins has experienced candidates who have come in feeling a little too confident.

“One just came in very arrogant. They knew they had the job. When they walked in the door,” she said. “Everything that came out of their mouth was about how great they were and this last company really screwed up in letting them go,” she said. “He went on to trash them and all the bad stuff they were doing. He said it was fine because they were basically screwing him over and he didn’t need to be there.” Incredibly, when they didn’t get the job, the candidate ended up emailing her to say she had “made a mistake in not hiring them.”

It’s something of an unwritten rule that any good candidate comes prepared with questions to ask at the end of the interview. But according to Perkins, there is such a thing as a bad question. “I’ve literally had somebody ask me what the job would be doing,” she said. “That’s an instant not for me.”

Perkins added: “Even asking, ‘how much vacation do I get?’ Sometimes that can be built as ‘I don’t want to work that much.'”

She also warned against asking about the potential career path of the job. “Ambition is good but it’s how you ask. It can sound a little entitled or arrogant if said in the wrong way. So maybe something like ‘What does this career path look like?’ Or ‘What does growth in this role look like?'”

What Not to Say in an Interview

For Jennifer Finlay, senior partner at executive recruitment search firm Lucas Group, candidates should avoid any superfluous personal information that’s not going to be of benefit to you in the interview.

“We are all human, even as much as we try not to be biased. We just have this human element behind us and experiences, bad and good that make up who we are,” she told Newsweek. “So if I’m a hiring manager, and let’s just say you’re sharing with me how excited you are about your upcoming marriage and I’m in the middle of a terrible divorce, there’s just some biases that are going to come out no matter how much I try and stuff them down.”

How to Dress for an Interview

Finlay also advises against taking “creative liberties” when it comes to your interview attire.

“I prepped a candidate to go to an interview in Dallas, Texas. These folks are in quarries and mines, even though they are salespeople, who wear steel toe capped boots and sit on the back of truck tailgates,” she explained. “My candidate showed up in a suit with a scarf,” she said. “When he walked through the door. My hiring manager said ‘this is not a cultural fit.'”

Being Honest About Your Resume

She believes it’s also crucial for candidates to be honest, particularly when it comes to their background and experience.

“I had a candidate that we moved all the way through the process,” Finlay said. “We were at the offer stage and ready to do the background check when they called me with what is every recruiters worst nightmare.”

“He had lied about his degree for 20 years on his resume claiming he had a two year degree in arts,” she said. She told him to contact the prospective employer directly and come clean. “Don’t lie on your resume. We have too many resources now to vet those untruths.”

Though in that instance the candidate ended up getting the job anyway, others have been less fortunate after withholding information. Finlay recalled one client who looked set to take a job until a last minute question derailed everything. “They asked him, ‘Do you have a restrictive covenant of any kind or a non-compete?’ and he pulled it out. He was not going to offer that unless someone asked.”

She said that she had known, then she might have been able to deal with the situation. However, the candidate’s actions of her “planted the seeds of doubt” and the offer was rescinded with the prospective employer taking the view that he had been “deceitful by withholding information.”

What Not to Do in Virtual Interviews

Richard Deosingh, district president at global human resource consulting firm Robert Half, notes that there are new pitfalls in the age of remote working and virtual meetings.

“You have to have a professional approach,” he told Newsweek. “Test your equipment, make sure your virtual interview background is clear, clean or clouded. Make sure that it’s well lit around you so your interview doesn’t come across like you’re in the shadows.”

In his experience, it’s crucial for candidates to treat a virtual interview in the same way they would an in-person meeting. Arrive early, dress the part and have questions prepared.

He’s known plenty of candidates to fall foul of dressing appropriately. Deosingh views the correct interview attitude as a crucial part of the research and preparation for an interview. “Look up the interviewer on LinkedIn. Look up other company employees. See how they are presenting themselves there because that’s a professional network.”

When it comes to the interview itself, Deosingh is wary of candidates who ask “canned questions” at the end of an interview. Canned questions are standard, stock queries that employers will have heard countless times.

“During an interview it’s about how you set yourself apart from the other candidates. So something like ‘How would you describe the work environment?’ or ‘Can you tell me what the average day would look like?’ To me they are canned questions.”

“Even though it’s important to ask, you should try and set yourself up differently. Some questions I recommend candidates ask are things like ‘how is success measured in this opportunity?’ or ‘Tell me about the tools and resources available for me to do my job effectively.'”

He views the opportunity to ask questions as a chance to not only get a better assessment of the job, but also separate yourself from the others and close out the interview strongly.

How Not to Answer Interview Questions

Deosingh is wary of candidates cracking jokes when answering questions. “It’s okay to show a little bit of a sense of humor in your responses but don’t overdo it or the interviewer might think you’re not prepared and everything is a joke.”

He also thinks one of the biggest mistakes an interviewee can make arises when they are asked about their strengths and weaknesses. “A weakness doesn’t necessarily need to be a professional weakness,” he said. “A weakness can be something as simple as I love cheesecake. And my doctor doesn’t seem to think that’s a good idea and you know, I’m working my way off of it.”

Above all else, he said it’s important to accept that mistakes will be made in an interview. “It’s human nature,” Deosingh said. “Don’t dwell on it. The more you dwell on it the more it impacts the rest of the interview.” He advises candidates to keep the mistake in mind and address it with the interviewer when the opportunity to ask questions arises. “There’s always a time to come back around and recover if you feel that you’ve slipped up.”