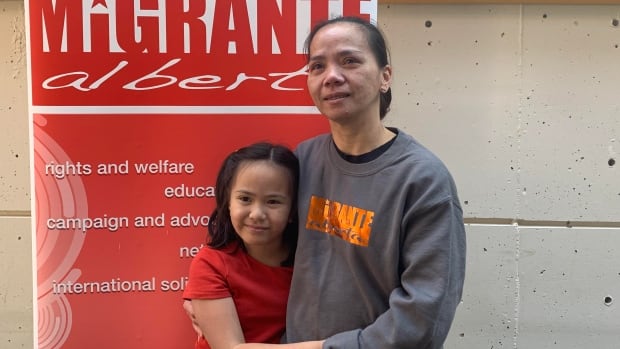 Supporters are rallying to stop the federal government from forcing a six-year-old Canadian citizen and her mother to leave the country on July 8.

Evangeline Cayanan is set to be deported to the Philippines, and her young daughter, McKenna, has no other option but to go with her as she has no other family in Canada.

The family’s friends, community and a growing number of signatories to an online petition are pleading with officials to intervene and allow the mother and daughter to stay, citing concern about McKenna’s ability to access health care.

“I don’t want to beg, I just want to fight for her rights. McKenna Canadian deserves everything, just like other children here in Canada,” Cayanan said, speaking through tears at a news conference in Edmonton organized by foreign worker advocacy organization Migrant Alberta on Thursday.

Cayanan arrived in Canada in 2010 as a temporary foreign worker. She worked in Ontario for a year before coming to Alberta.

Cayanan said during her time working, she pushed back and reported two of her employers for harassment and discrimination.

According to federal court documents and her lawyer, she alleges one of the employers accused her of theft as retribution. Cayanan was charged with one count of theft over $5,000 in 2014, but prosecutors stayed the case in 2015, according to court records. Her lawyer for her said she was n’t even in the country at the time of the alleged theft.

Cayanan lost her work permit and wasn’t able to apply for refugee status. She became undocumented in 2015, the same year her daughter Ella McKenna was born.

Because her daughter was born in Canada, she has Canadian citizenship.

With no family in Canada, Cayanan raised McKenna on her own and also tried to find an avenue for staying in the country and to be able to resume working.

The single mother also threw herself into activism, fighting for access to health-care services for children of undocumented parents. In 2018, she was awarded a John Humphrey Center for Peace and Human Rights award for her work.

She also volunteers with Migrante Alberta to support migrant workers.

McKenna has Attention Deficit/Hyperactivity Disorder (ADHD) and other health conditions that require special attention and support that her mother fears she won’t be able to get in the Philippines.

Cayanan said her daughter is also unfamiliar with the language and culture of her home country and would struggle, a concern echoed by McKenna’s social worker Susan Otto.

“Honestly this is magnified beyond measure for a child who has any social or emotional challenges.”

Cayanan filed applications to be allowed to stay on compassionate and humanitarian grounds in 2016 and 2019, both of which were rejected. Facing deportation, she also filed a pre-removal risk assessment, arguing it would be unsafe and that she and her daughter could face persecution in the Philippines.

According to court records, Cayanan cited her involvement in activism and public criticism of the Philippines government, concern about the level of poverty and crime in the community where her family lives among other concerns.

In 2021, the Immigration, Refugees and Citizenship Canada (IRCC) officer found there wasn’t enough evidence to prove the grounds Cayanan had argued.

On Thursday, Cayanan’s lawyer Manraj Sidhu noted that Cayanan had filed all three of those applications on her own before he started working with her, and that he planned to file a new application that cites humanitarian and compassionate grounds.

Cayanan’s friends and Migrante Alberta are also hoping public pressure on officials will prompt an intervention. Over 2,000 people have already signed a petition calling on Public Safety Minister Marco Mendicino and Immigration, Refugees and Citizenship Minister Sean Fraser to stop the deportation, and grant the mother permanent resident status.

IRCC has not responded to a request for comment.