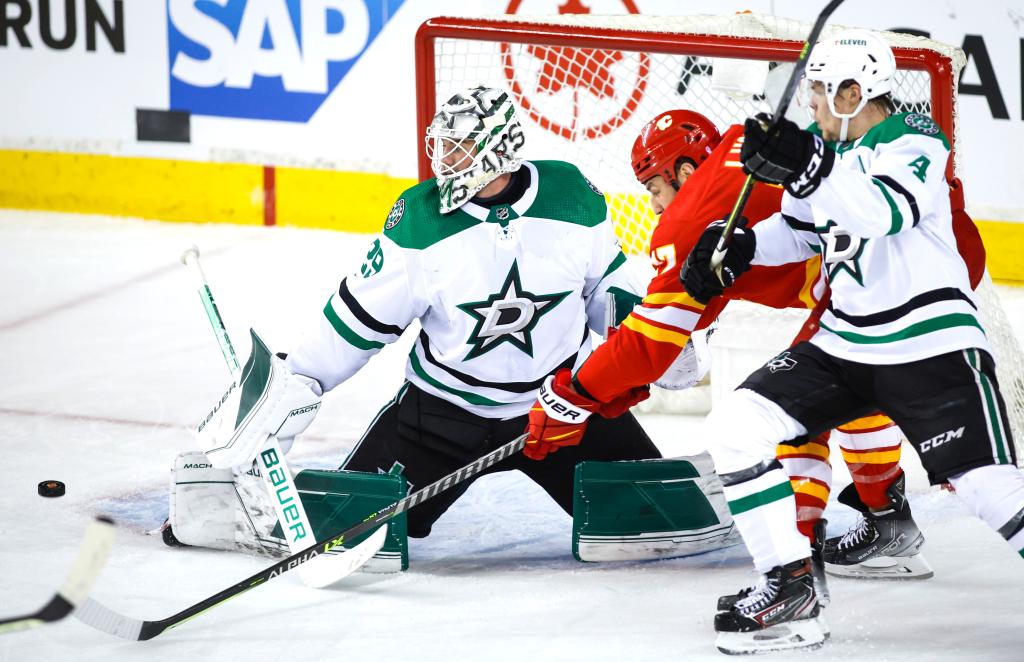 CALGARY, Alberta — Jake Oettinger made 29 saves and got his first postseason shutout in his second career playoff start to lift the Dallas Stars over the Calgary Flames 2-0 on Thursday night to even their first-round series at a game each.

Joe Pavelski scored and Michael Raffl added an empty-net goal for the Stars.

The best-of-seven conference quarterfinal series heads to Dallas for Saturday’s Game 3 and Monday’s Game 4 at American Airlines Arena. The Flames opened the series with a 1-0 win Tuesday.

The Flames outshot the Stars 12-7 in the third period. Raffl scored into an empty net with 1:09 remaining.

Outplayed in the opening period, Calgary generated more scoring chances for an 11-7 edge in shots in the second. The Flames were denied by Oettinger, however, and didn’t get their sticks on the few rebounds the goaltender allowed.

In a bid to generate more offense, Stars coach Rick Bowness continued to play forwards Jamie Benn and Tyler Seguin on separate lines, as he did in the second and third period of the series opener.

After not registering a shot on net in Game 1, Pavelski scored the first goal of the series for the Stars at 7:47 of the first period on a defensive-zone Flames turnover.

Defenseman Noah Hanifin put the puck off the boards and onto the stick of Jason Robertson inside the blue line. Pavelski deflected Robertson’s shot over Markstrom’s glove.

Johnny Gaudreau appeared to score 43 seconds in for Calagry, but his breakaway goal was waived off for offsides.

Matthew Tkachuk and John Klingberg renewed hostilities from the first game, in which Tkachuk hammered Klingberg into the boards behind Calgary’s net late in the first period.

Tkachuk cross-checked Klingberg, who took a roughing penalty, in the aftermath of Gaudreau’s disallowed goal to send both men to the box.