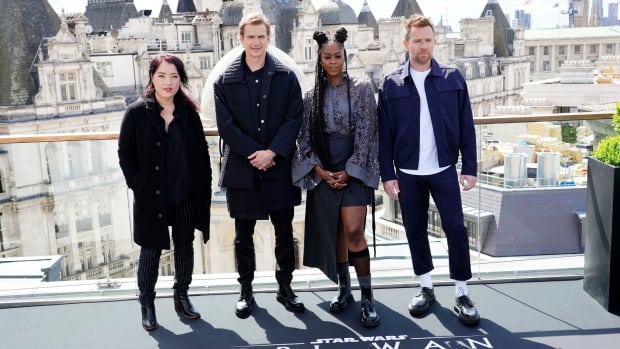 An infamous pair that battled to death in one of pop culture’s most well-known franchises was reunited for what may be the last time.

Disney+ released the final episode in its six-part miniseries Obi-Wan Kenobi on Wednesday — and the series’ namesake found himself again facing down his former Padawan, 10 years after the Jedi knight’s heartbreaking turn to the Dark Side.

“It’s been a surreal experience coming back to this character,” said Canadian actor Hayden Christensen, who reprized his role of Anakin Skywalker-turned-Darth Vader in the Star Wars series.

The series follows Obi-Wan as he sets out to rescue Princess Leia who, at 10, has been kidnapped — setting off a chain of events that leads to the confrontation with Darth Vader.

After 17 years, Hayden Christensen as Darth Vader is reunited with costar Ewan McGregor as Obi-Wan Kenobi in Disney+ series

The last time Christensen donned his Darth Vader suit was 17 years ago, then in starwars: Episode III – Revenge of the Sith, after Kenobi, played by Ewan McGregor in the film and the new series, left him for dead and he was rescued by the Emperor, a cryotank and a lot of new hardware.

But the fight that preceded that remains a pivotal moment in the Star Wars canon, haunting both characters in the latest installment.

Canadian director Deborah Chow said it was important to her to reunite two intensely connected characters, especially in a show that’s so linked to the events of the previous films.

“I felt very strongly it should be Hayden,” said Chow, who first floated the idea to him in Toronto a few years ago.

Christensen said he never expected he would be back in the role, but he didn’t hesitate to take it on when Chow came calling.

“It was a very easy decision,” he told CBC News, because he wanted to explore the evolution of Vader.

Another part of the draw? Working with McGregor again after nearly two decades, since the two actors had become close during the filming of the earlier movies.

“The whole experience had a lot of nostalgia to it,” Christensen said. “Getting to swing a lightsaber together brought back a lot of old memories.”

But there have also been harmful moments following the premiere of the series.

“There’s nothing anybody can do to stop this hate,” she said in the video.

She also thanked those who came out in support of her.

“All of us felt a bit heartsick about it,” said Chow, who said the franchise publicly supported Ingram.

“We love her as a person and as an actor.”

Ace Obi-Wan Kenobi picks up a decade after the Revenge of the Sith and fills in a gap in the Star Wars timeline, directing the episodes presented a welcome challenge for Chow.

“We have these huge iconic legacy characters and we’re in between trilogies, so there was a huge responsibility in that,” she said.

Chow said there currently aren’t any plans for a second season.