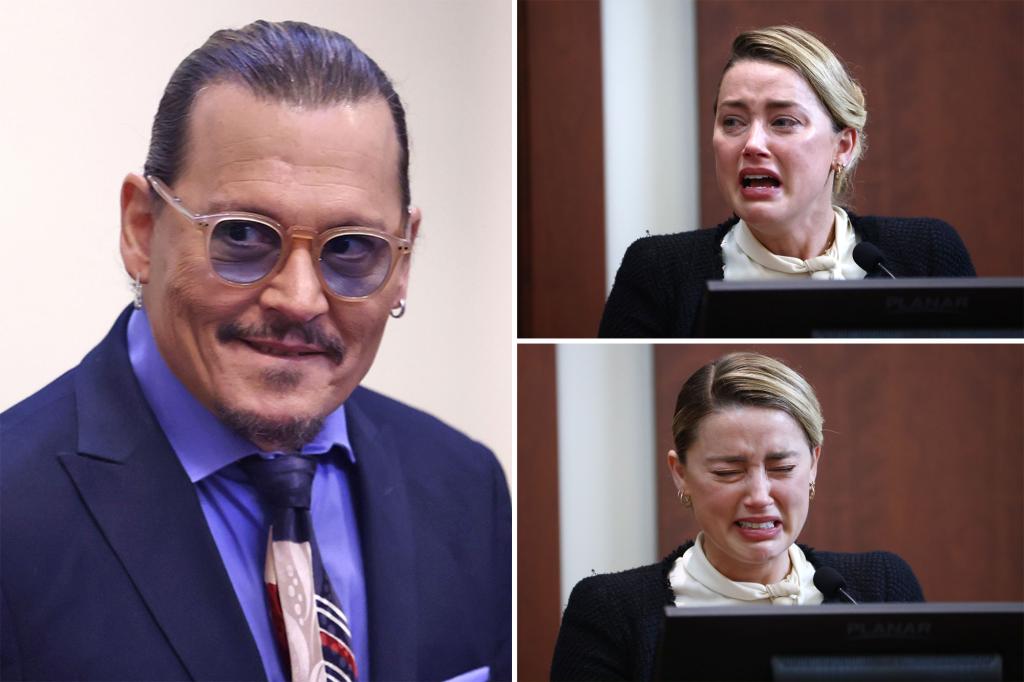 Johnny Depp was a jealous partner who frequently attacked Amber Heard while accusing her of cheating during drug- and alcohol-fueled rages, the actress said, as she broke down on the stand Thursday.

The “Aquaman” actress said her ex-husband didn’t want her to take on sultry roles — or work at all — because of how paranoid he was, and accused her of sleeping with her co-stars, including Billy Bob Thornton and Eddie Redmayne.

“He would say, ‘You don’t need to work, kid. I’ll support you, ‘”but she wanted to work, and claimed her insistence that she quit acting was part of her controlling personality.

Once, Depp grew so jealous of Heard’s working relationship with actor James Franco that he attacked her on a private plane the two were taking along with some of Depp’s team in May 2014.

“He called me a slut,” Heard, 36, said of Depp, 58, adding that he accused her of “secretly having a thing” with Franco.

When she got up from her seat to move away from Depp, he allegedly started throwing things — and then slapped her face, she said.

“It didn’t hurt my face. I just felt embarrassed that he would do that to me in front of others, ”Heard said, adding that Depp proceeded to taunt her and call her names of her.

On the flight, Depp also allegedly kicked her in the back with his boot, she testified — as he appeared to squirm in his seat in the Fairfax, Va., courtroom.

“I felt this boot in my back,” she said. “I fell to the floor. And no one said anything. No one did anything. You could have heard a pin drop.”

The “Pirates of the Caribbean” star apparently grew violent on the flight from Boston to Los Angeles about Heard’s kissing scene with Franco, 44, on the set of “The Adderall Diaries,” she said. “I just remember feeling so embarrassed that he could kick me to the ground in front of people,” she said, “and more embarrassing, I didn’t know what to do about it.

“I hated James Franco. He was accusing me of having a thing with him in the past since I had filmed ‘Pineapple Express’ with him.”

The court previously heard about the incident when Depp was on the stand earlier in the $50 million defamation trial. Depp denied drinking before getting on the plane, and claimed Heard had started an argument, pursuing him until he hid in a bathroom.

But on Thursday, the jury heard a recording Heard made toward the end of the incident, in which it sounds like Depp is “howling like an animal” and babbling incoherently.

Depp is suing his ex-wife over her 2018 op-ed in The Washington Post in which she described herself as “a public figure representing domestic abuse.” He was never mentioned by name in the piece, but claims it clearly referenced him.

On the stand, Heard gave example after example of the alleged abuse. In August 2014, Depp said he wanted to “quit” his Roxicodone detox — and allegedly got violent after Heard tried to encourage him to keep going.

“I said something to him and he got so angry at me, he slapped me across the face,” Heard testified. “He was crying, saying no woman had ever embarrassed him like that, she had ever made him feel like that.”

The actress said her career suffered as a result of her overbearing husband, who would try to convince wardrobe to allow her to dress more conservatively on set.

Heard said she began taking photos of him passed out because nobody believed that he had an addiction problem.

Four photographs submitted to the Fairfax County Circuit Court appear to show him unconscious in chairs and on a hotel room floor.

“He’d pass out, get sick, lose control of himself. People would pick him up and clean it and fix it,” Heard said. “He wouldn’t either remember, or he would deny it, or he would accuse me of saying that this had happened when it didn’t.”

The couple’s fighting seemed to crescendo in March 2015 while in Australia, where Depp was filming the fifth installment of the “Pirates of the Caribbean” franchise.

Heard broke down into heaving sobs on the stand Thursday as she recalled Depp allegedly threatening to “carve up” her face with a bottle — and then inserting one inside her during a fight.

“I didn’t know if the bottle he had inside me was broken,” she said, breathing heavily as she held back tears. “I couldn’t feel it. I couldn’t feel anything.”

The harrowing incident happened during the same fight that left Depp with a severed finger—something he claimed on the stand happened when Heard flung a vodka bottle at him. The two had only been married a month earlier.

After the alleged attack, Heard said she took sleeping pills to fall asleep and woke up to her then-husband missing part of his finger.

She said she found everything from mirrors to walls to pillows covered in unintelligible messages drawn by Depp in the blood from his severed finger.

“I’m looking in his eyes, I don’t see him anymore,” she said, starting to sob. “It wasn’t him. It was black. I’ve never been so scared in my life. I was trying to get through to Johnny, and I couldn’t see him at all.”