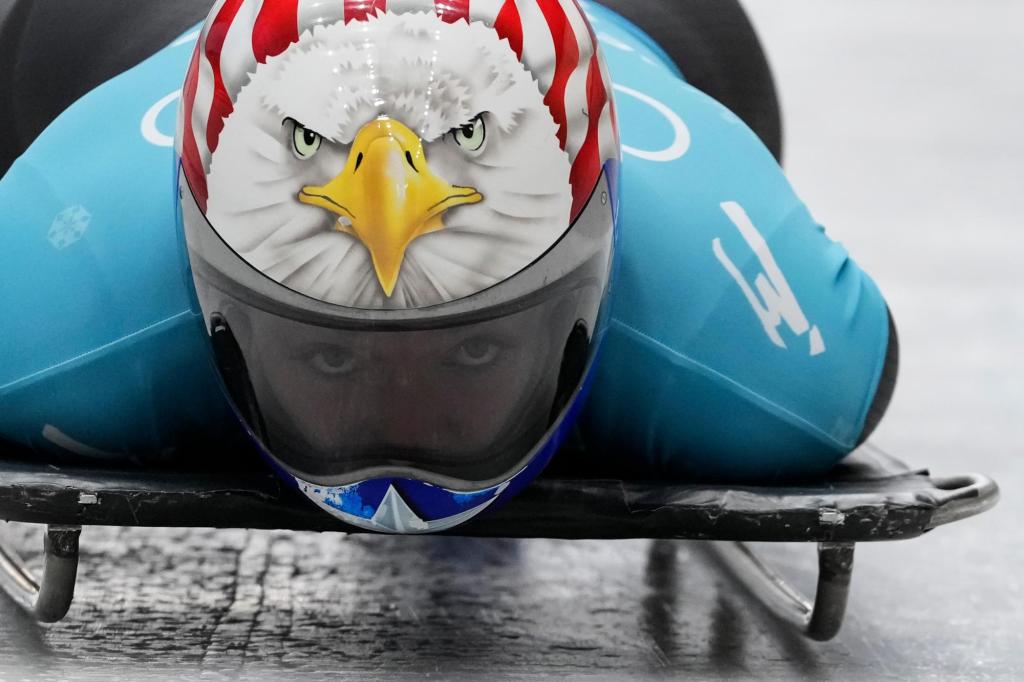 Then again, her resume suggests that she’s made it look easy. Uhlaender is a five-time Olympian, joining snowboarders Shaun White and Lindsey Jacobellis and curling’s John Shuster as the only members of this US team in that club. She’s a past world champion, a past World Cup champion, and was the top-ranked American woman on the skeleton circuit this season.

Not bad for a 37-year-old, who just happens to be the oldest American female athlete competing in the Beijing Olympics.

It hasn’t always been fun. That is the hallmark of Uhlaender’s story, especially in Olympic years.

Her Olympic debut was in 2006, a season where her coach got fired just before the start of the Turin Games while others on the team were dealing with major injuries, a lawsuit, a harassment allegation and a positive doping test. In 2010, she was dealing with a shattered kneecap and grieving the loss of her father for her. In 2014, a concussion derailed some of her season from her and she narrowly missed — then had, then missed again — an Olympic medal. In 2018, she had to race with a broken heart, largely because of the death of her close friend and US bobsled great Steven Holcomb.

The challenge entering this year’s Olympics: She tested positive for COVID-19 last month, while the three-woman race for two berths was ridiculously close, and if her clearance to resume sliding had come even a day or two later than it did she would have had no chance of getting to Beijing.

“There’s only so much I can control, right? So now, I just want to have fun while I can,” Uhlaender said. “I mean, I didn’t really expect to be able to be competing like a metal contender at 37. But it’s happening.”

Skeleton — the headfirst sliding discipline where athletes can reach 80 mph or so — at the Beijing Games starts Thursday with the men’s competition, where Andrew Blaser will make his Olympic debut and be the lone American in the field. Women’s skeleton, with Uhlaender and Olympic rookie Kelly Curtis sliding for the US, begins Friday.

They all took wild paths to skeleton. Blaser wanted to be a bobsledder at first, before being told his slim frame just wasn’t right for that sport and getting steered toward skeleton instead. Curtis, who served in the US Air Force, was a track athlete who also then went into bobsled before changing course. Uhlaender was a skier, has since dabbled with weightlifting and cycling, and hasn’t ruled out trying to pick up curling in the future.

“Katie has kind of taken a little bit of the Mother Goose role right now where she’s like, ‘No, no, that’s not how, you’ll learn, OK,’” Blaser said. “She’s been trying to kind of teach us the ways around what happens at the Olympics.”

Nobody knows that path better than Uhlaender does.

She was sixth in the Turin Games in 2006, 11th four years later at Vancouver and placed 13th at Pyeongchang four years ago.

What’s missing there is the 2014 Sochi Games: Uhlaender was fourth when she left Russia, then appeared to have been promoted to third place years later — for 70 days — then dropped back down to fourth again. Those were the Olympics held under the cloud of Russia’s state-sponsored doping scandal, and the host country’s Elena Nikitina is the bronze medalist from those Games even though she had been implicated in that mess.

Nikitina’s medal was taken away after a long investigation led to her disqualification from the Sochi Games; Uhlaender never actually received the medal, just the title of bronze medalist, and then lost that anyway when Nikitina’s third-place finish was restored under appeal.

Nikitina and Uhlaender are still competing head-to-head. Uhlaender has been furious with the system, not with his competitor.

“I wanted to come back and just prove to myself that I could focus on the purity of sport, the part of it that kind of blurs the lines or dissipates the need to take a stance with politics or religion or whatever,” Uhlaender said. “I mean, it’s really awesome to look to my right and left and high-five the Russians and know that we’re competing purely for sport and at our best. We still hold our own opinions of the past, but we respect each other as competitors and we respect the passion of sport — for sport.”

Uhlaender intends these to be her final Olympics. With her, one never really knows. Retirement has been talked about, but now she’s thinking about continuing to race for at least one more season and potentially getting to compete in the world championships for the 10th time.

Her whole life has been being an athlete. She, only half-seriously, said her home address de ella right now is the Olympic Village. When the Beijing Games end, she plans to return to the Olympic Training Center in Lake Placid, New York, and figure out what’s next.

Maybe she’ll slide. Maybe she won’t. But if the next phase gets handled the way her sliding career de ella did, she’ll be able to deal with whatever challenge comes her way.

“Try doing skeleton and then tell me it’s not amazingly fun,” Uhlaender said. “It’s the ultimate.”