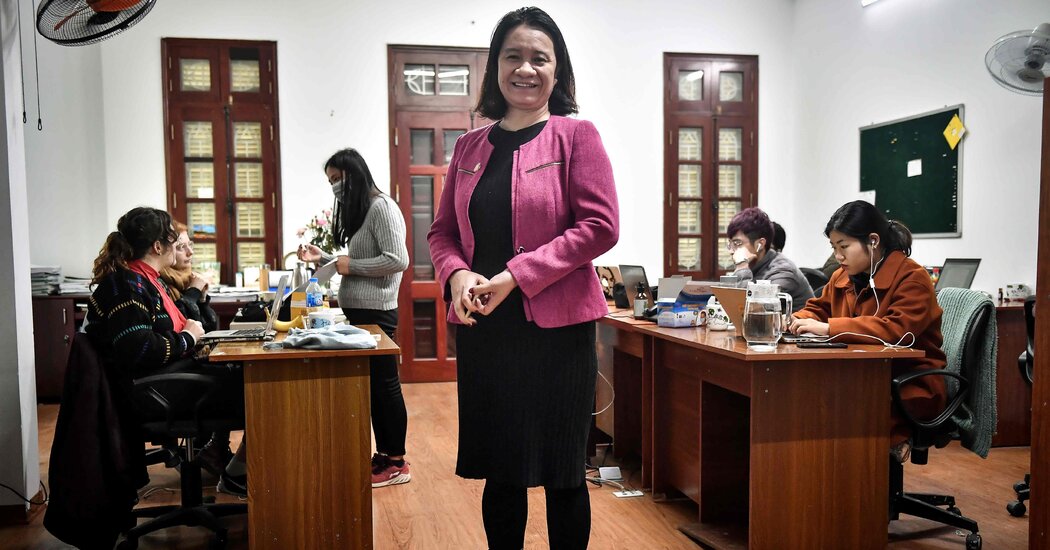 When the Vietnamese government decided in 2016 to cut the use of coal in its next energy plan, it followed the advice of an unusual source: one of the country’s most prominent environmentalists.

Nguy Thi Khanh was vocal about what the government had to do: she said it had to cut coal-fired power by 30,000 megawatts — equivalent to the capacity of all the coal plants in Texas and Pennsylvania. The government met her more than halfway, agreeing to a reduction of 20,000 megawatts.

It was a big victory for the country’s environmentalists. But on Friday, Ms. Nguy, 46, was convicted of tax evasion and sentenced to two years in prison, according to three people with knowledge of the verdict. Her case of her has sent tremors of fear through the environmental movement.

Soft-spoken and self-effacing, Ms. Nguy produced reports that documented the risks for Vietnam, which has one of the fastest-growing economies in the world, to continue relying on coal. She traveled throughout the country, using science and statistics to persuade the public and sway local officials.

She also organized campaigns and mobilized communities, especially among young people, to advocate for the environment — activities that could be seen as a threat to the one-party state, which has long been intolerant of dissent in general.

Many environmentalists say the prosecution of Ms. Nguy, who is known as Khanh, and other activists calls into question Vietnam’s pledges at a United Nations climate summit in Glasgow last year, when Prime Minister Pham Minh Chinh vowed to phase out coal consumption by 2040. It was a significant development — Vietnam, a country of 99 million people, was the ninth-largest coal consumer globally.

“It makes no sense to us,” said Michael Sutton, executive director of the Goldman Environmental Foundation, who has written to Vietnam’s ambassador in Washington and called for Ms. Nguy’s release.

“She’s done everything to help Vietnam achieve its own goals and to make the country look good in the international arena,” he added. “We’re concerned about what this says for the future of and the success of Vietnam’s stated energy ambitions.”

Others saw the case as reflective of a worrisome trend.

“This is a very strong signal from the Communist Party that they are now willing to go much further to control civil society,” said Trinh Huu Long, the co-director of Legal Initiatives for Vietnam, based in Taiwan. “And they will not tolerate even slight criticism.”

Before Ms. Nguy’s advocacy, Vietnam had little in the way of renewable energy. But a growing awareness of the health costs of burning fossil fuels prompted the government to embrace solar power. Many local governments offered tax exemptions and attractive tariffs to encourage investment. It worked — Vietnam became the country with the largest installed capacity of solar and wind power in Southeast Asia.

But many officials pushed back against renewables. In several draft plans, the government has flip-flopped on its policy, initially indicating that it wanted to continue its reliance on coal. There were fears that weaning the country off coal could hurt the economy and that renewable energy could be an expensive and unreliable way to power the country.

In many ways, the treatment of Ms. Nguy illuminates the Vietnamese government’s conflicted approach to environmental protection and infighting among various ministries. Confronted by rising public anger over air pollution and chemical spills, the government has allowed environmental advocacy groups and tolerated limited protests.

But it also faced criticism from officials who called it unfair that developed countries have long been allowed to pump huge amounts of greenhouse gases while Vietnam is being pressured to find cleaner ways to develop its manufacturing sector.

“They may be concerned that Vietnam’s transition away from coal may harm their interests, so they want to silence her,” said Le Hong Hiep, a senior fellow at the Vietnam Studies Program at Singapore’s ISEAS — Yusof Ishak Institute. “I think that may be the key reason for her arrest of her.”

The Ministry of Industry and Trade had just proposed a doubling of coal-fired power capacity, according to a draft plan. Ms. Nguy urged the public to circulate a letter addressed to the prime minister, signed by multiple environmental groups, warning him that the policy could “risk Vietnam’s isolation in the international community.”

They did. Almost immediately after the summit, the United States, Britain, the European Union and Japan started discussing possible energy deals with Vietnam. In March, John Kerry, the special US climate envoy, visited Vietnam, promising to increase engagement on climate and clean energy. In May, the Group of 7 major economies announced that it would give Vietnam financial and technical support to help the country transition from coal-fired power to renewable energy.

Jake Schmidt, senior strategic director for international climate at the Natural Resources Defense Council, said he has “zero confidence” now that Vietnam can deliver on the energy transition with the crackdown.

Ms. Nguy knew her activism had made her a target. Julien Vincent, executive director of Market Forces, an Australia-based group that focuses on institutions financing environmentally destructive projects, said Ms. Nguy told him her office de ella had been raided by police officers and described how “the police or government agencies are never too far away.”

“They are always following them,” Mr. Vincent said. “She’s said that it was part of daily life.”

The arrest of Ms. Nguy baffled her friends because she stood out for her nonconfrontational approach. She has said she admires Greta Thunberg but has acknowledged the Swedish teenager’s style of climate activism would not be accepted in Vietnam. She has said one of her primary motivations for her is being a mother to three children, ages 20, 15 and 10.

Coal was an issue close to Ms. Nguy’s heart. Born and raised in a rural area of ​​northern Vietnam, Ms. Nguy’s family lived near a coal-fired thermal power plant. She remembered the dust and the gray pall caused by the plant.

At that time, Vietnam was wedded to coal. In 2011, the government said it planned to add around 75 gigawatts of new coal by 2030. Vietnam had only 4 gigawatts of coal at that time, and the new goal — the total coal capacity of a little more than Germany and Poland combined — would put the country on track to have the fourth largest number of coal plants in the world, behind only China, the United States and India.

That year, Ms. Nguy helped set up the Green Innovation and Development Center, or GreenID, a group aiming to create a renewable energy pathway for Vietnam. A year later, she established the Vietnam Sustainable Energy Alliance, now comprising 12 organizations.

After Ms. Nguy won the Goldman prize in 2018, the People’s Army Newspaper, by the Vietnamese defense ministry, called her an “Asian environmental hero,” for helping “the state make policies for sustainable development.”

The enthusiasm did not last long. In February, the police in Hanoi arrested her.

Now in a detention center in Hanoi, Ms. Nguy is in good health and keeps up with her meditation practice, according to a person with knowledge of her situation.

Before her sentencing, she said she was hoping for the shortest prison sentence possible, the source said. Her goal from her: to return to work soon.