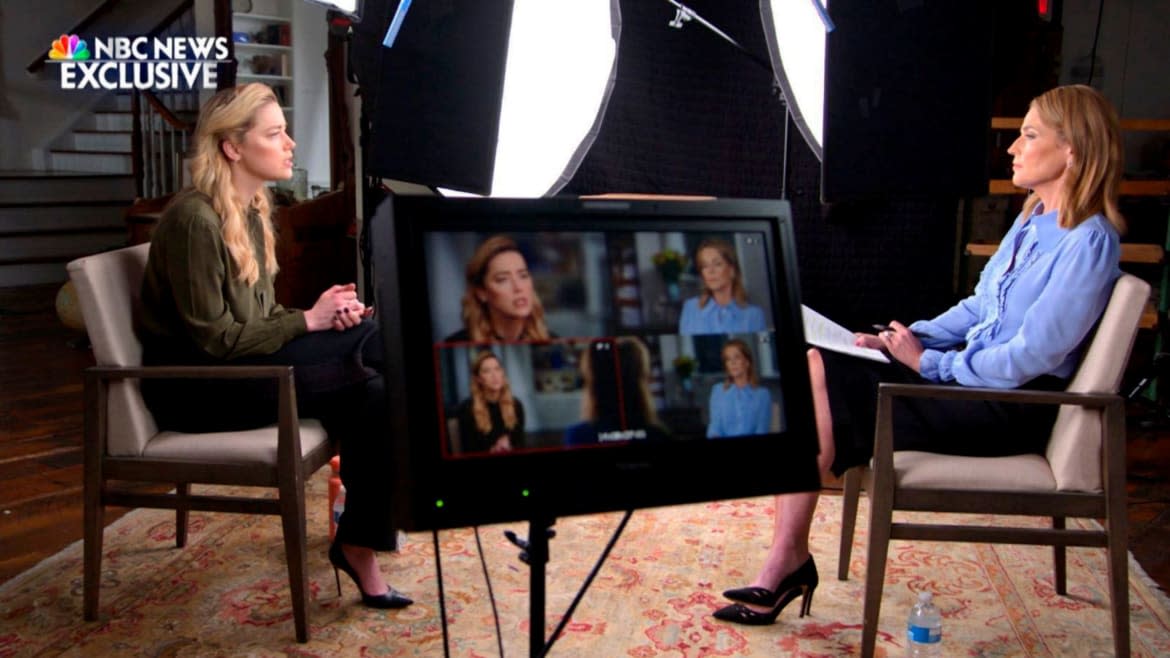 on wednesday, Today aired part two of an exclusive interview with actress Amber Heard—her first televised sit-down after losing an explosive defamation trial against her ex-husband, actor Johnny Depp. Among other revelations, the 36-year-old claimed that she still “loved” Depp and denied wanting to “cancel” him in her op-ed at the center of the case.

During the Virginia trial, which concluded on June 1, a jury ruled that Heard defamed Depp when Washington Post published a 2018 op-ed under her byline describing herself as a victim of domestic abuse. Depp was awarded $15 million in damages but will only receive $10.35 million due to a state cap on punitive damages. The jury also awarded Heard $2 million in compensatory damages after finding that she was defamed by Depp’s attorney, Adam Waldman, after he accused Heard of framing Depp in a “hoax.”

Despite winning that particular counterclaim, as well as a 2020 UK trial that determined Depp had abused Heard on 12 of 14 occasions, Heard has largely been painted as a liar in the public eye by Depp’s legion of obsessively devoted fans on social media and his Hollywood peers since she first alleged abuse in 2016. Similarly, Guthrie appeared to be skeptical of the Aquaman star throughout their one-on-one, pressing her on recordings and other evidence presented by Team Depp while conveniently ignoring much of the recordings and other evidence offered by Heard. (The UK trial admitted considerably more evidence than the Virginia one, which may help explain the different outcome.)

In the first half of the interview that aired on Monday, the news anchor grilled the actress on whether she instigated physical violence against Depp, questioned her about recordings that Heard claims were taken out of context, and informed her that the First Amendment doesn’t protect “lies.” In the conclusion to the interview, Guthrie appeared equally cynical and unsatisfied with Ella’s answers, telling the actress that her “alluding” to Depp in her op-ed was “unmistakable.” She also asked Heard if she tipped off TMZ to take photos of her with a bruise when she filed a restraining order against Depp in 2016. For the most part, her questioning didn’t go beyond information that wasn’t already raised during the trial and disputed by Heard, and completely lacked any insightfulness on abuse.

Juror Reveals Why They Sided With Johnny Depp

It’s not the first time a television host has been insensitive regarding the topic of domestic abuse or unknowledgeable on how survivors adapt to violent situations with their partners. (Watch Barbara Walters’ interview Rihanna following her incident of her with Chris Brown or Gayle King interview FKA Twigs about her allegations of her against Shia LaBeouf). However, viewers and journalists remain stunned by the fact that Guthrie was allowed to interview Heard in the first place.

The week prior, Guthrie disclosed that her husband, Michael Feldman, worked as an adviser for Depp’s legal team during the defamation trial right before launching into an interview with Depp’s attorneys Camille Vasquez and Benjamin Chew. The interview went viral on Twitter and was met with immediate backlash from users claiming a conflict of interest.

“If I was Amber Heard’s publicist or pr person, I probably wouldn’t grant my client’s first major interview with someone who disclosed a conflict of interest,” wrote one Twitter user.

“If Guthrie is to continue to do these interviews, TODAY needs to make much larger disclaimers that Guthrie, through her husband’s consulting gig, was personally enriched by the Depp PR team,” posted another. “The flagrant conflict of interest is so disrespectful to Ms. Heard.”

Journalism experts have since weighed in on the controversy in a Business Insider reportcalling the decision for Guthrie to interview Depp’s lawyers “a little nuts” and highlighting a “financial stake,” seeing as how Feldman could be utilized again when Heard seeks to appeal the jury verdict.

While Heard nor her representatives have yet to speak on the controversy, sources in the same article say that Heard and her team were both aware of Guthrie’s connection to the case and were willing to proceed with the interview, which will conclude with an hour-long Dateline special airing on Friday.

While it’s hard to imagine the thought process behind the arranging of this interview and its use in a subsequent editorial, it’s possible that Heard, who has been publicly compassionate toward the jury and Depp’s supporters, wanted to show the public that she could engage in a polite conversation with someone closely associated with her detractors. Still, it seems strange and extremely ill-advised that Heard’s team would allow their client to undergo Guthrie’s poor, unbiased questioning for her first major television appearance post-trial, given the amount of journalists presumably chomping at the bit to land an exclusive with the actress.

Regardless of intent or whatever knowledge Heard and her team received prior to the interview, the fact that Heard spent the majority of the sit-down defending herself against widely publicized claims all over again is another tragedy for the actress, whose status when it comes to the upcoming Aquaman sequel remains up in the air. Ultimately, the saddest part of the fiasco is how completely avoidable it was.

Read more at The Daily Beast.

Get the Daily Beast’s biggest scoops and scandals delivered right to your inbox. Sign up now.