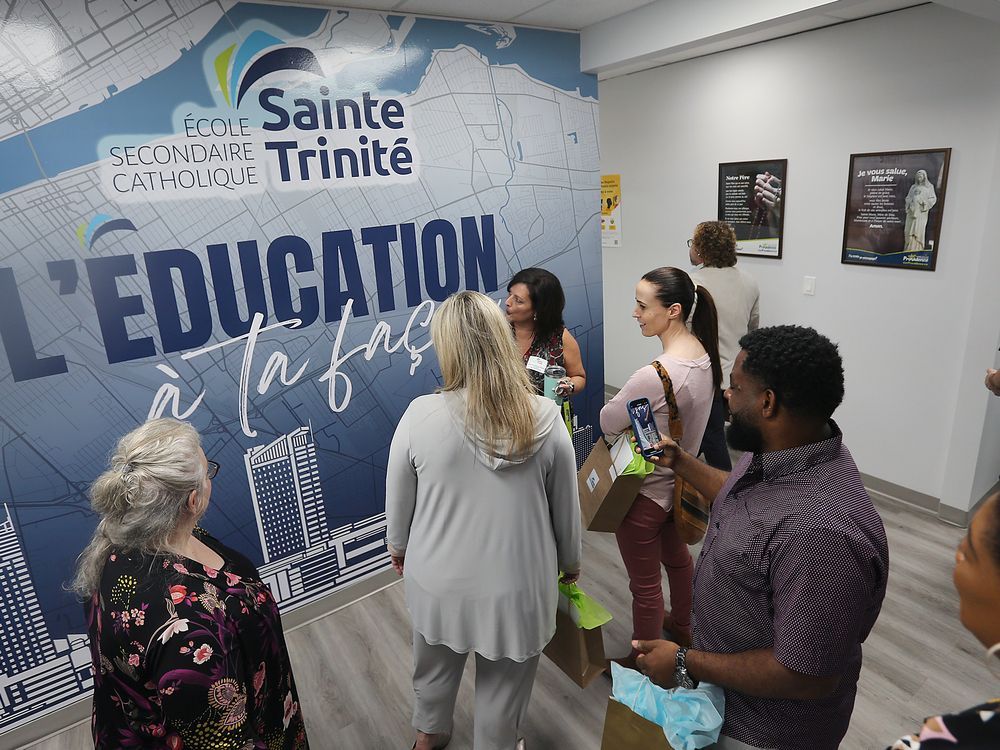 As a student, Princia Gateka loves the new learning space at the adult French Catholic learning center on Ouellette Avenue she helped officially open on Wednesday.

And the new space comes with a new name — École secondaire catholique Sainte-Trinité.

Gateka joined Doris Sauve, chairperson of the Conseil scolaire catholique Providence (Csc Providence) to cut the ceremonial ribbon at the recently renovated location on the third floor at 633 Ouellette Ave.

“Our old space was much smaller, this is so much bigger,” the 22-year-old Gateka said. “Here we have our own free space (in the student lounge) and we have the best view.”

Gateka, who came to Canada from Burundi, started working towards her high school diploma at the learning centre’s old location inside the Downtown Mission’s building further south on Ouellette. Once she has her diploma, she plans to study business administration at university.

Sainte-Trinité’s new space gives students and staff four distinct classrooms, double what they had before.

“It was pretty crowded,” teacher Lucien Gava said of their previous home. “In one classroom we would have five classes going on at one time. This is much better. We have our own space and our own work areas.”

Sainte-Trinité is actually celebrating a homecoming of sorts. The first French Catholic Adult Learning Center opened in 2008 and was located in a rented classroom from Collège Boréal at 633 Ouellette Ave. with a mandate to serve new Francophone immigrants to the Windsor-Essex region.

In 2014, the school moved to 875 Ouellette in order to increase capacity, and now they’re expanding again.

“We have all the amenities of a larger school but in a smaller space,” said Sainte-Trinité principal Jeannine Pellerin. “We have 20 students now and we’re looking to increase our enrollment.

“We are a school that offers continuous intake so someone could start with one or two courses now and have two credits by the end of June.”

Pellerin noted how staff have the flexibility to tailor a program to a student’s individual needs.

Sainte-Trinité held an open house Wednesday evening to show off the new digs to community partners.

“We wanted to stay in the core,” said Joe Picard, Csc Providence’s director of education. “A lot of our students take buses so accessibility was important.”

Picard noted how updates allow Sainte-Trinité to offer all programming virtually or in person.

The board will also base its alternative learning programs, night school and summer school out of Sainte-Trinité.