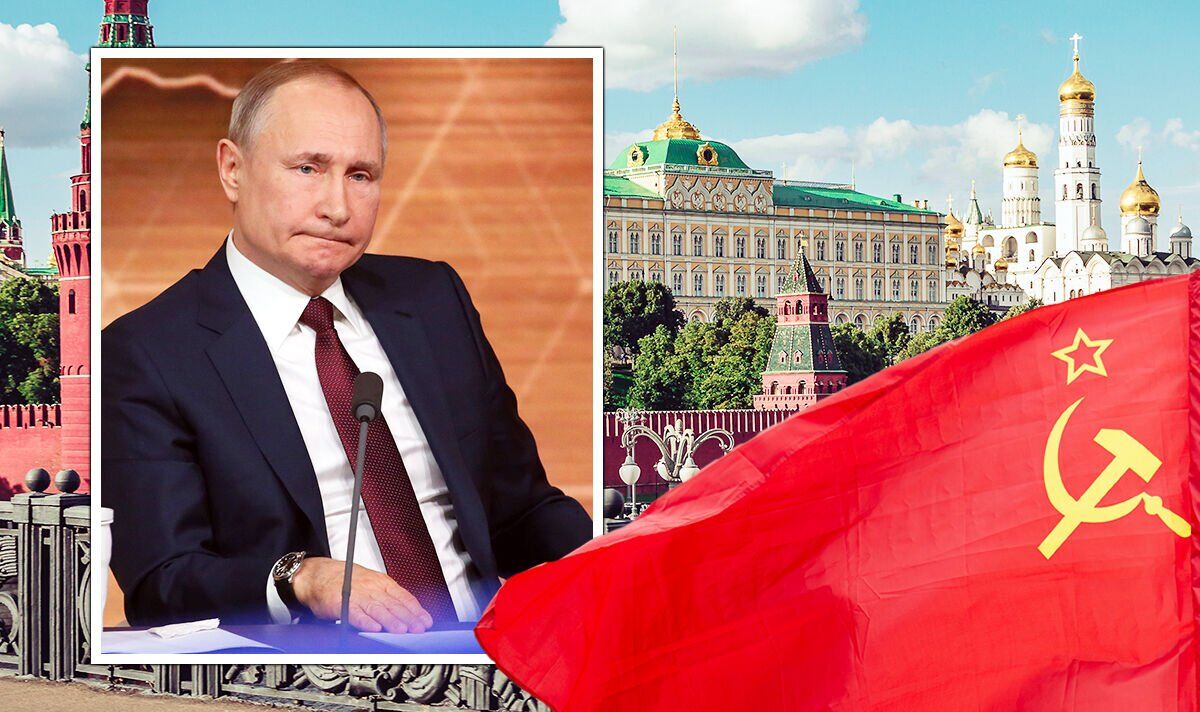 The red Soviet flag, famous for its hammer and sickle design, was lowered for the final time in December 1995 as the Soviet Union disintegrated. Mikhail Sheremet, Russian state Duma deputy, has called for a reappearance of the red communist symbol over the current flag of the Russian Federation.

Calling the Soviet image a “flag of victory”, he said the change would “remind” the West “of the greatness of our nation”.

He said: “Western countries are afraid, they’ve declared war on the Banner of Victory, because the red flag of victory reminds them of the greatness of our nation and our victory.”

There have been scattered reports of Soviet flags popping up in Russian-controlled Ukrainian territory since Russian forces invaded in February.

Historian Anne Applebaum said the modern-day Russian forces have “eerie” echoes of the Soviet Red Army and the NKVD, the secret police of twentieth-century Russia.

She told the Guardian: “They eradicate local symbols – statues, flags, monuments – and put up their own.”

But the Soviet flags are a “new twist” in the Russian invasion of Ukraine, she added.

She described: “Because modern Russia stands for nothing except corruption, nihilism, and Putin’s personal power, they have brought back Soviet flags as well as Lenin statues to symbolize Russian victory.”

Yurii Sobolevskyi of the Ukrainian city of Kherson’s regional council, called the reappearance of communist-era symbology in the southern city a “move to the past”.

READ MORE: Man, 20, left without lower half of his body after horror accident

“But the occupiers don’t understand.

“Therefore, the ‘USSR show’ will go on until Ukraine’s armed forces liberate our territory.”

The re-emergence of Soviet symbols has been seen right in the heart of the Russian capital itself, after Moscow’s major announcement he would revive the old Soviet car, the Moskvitch.

French carmaker Renault gave up their assets in Russia, also surrendering their controlling stake in Avtovaz, which manufactures Lada.

But Major Sergei Sobyanon, said that Renault’s main plant in Moscow would be repurposed to kickstart production of Soviet-era symbol, the Moskvitch car.

Mr Sobyanin said: “I’ve decided to list the factory as the city’s asset and summarize production under the historical brand Moskvitch.”

He added that he would retain “most” of the plant’s employees and subcontractors.

Moskvitch, which was seen everywhere across the Soviet Union in its heyday, was declared bankrupt back in 2006 after 75 years of producing cars.