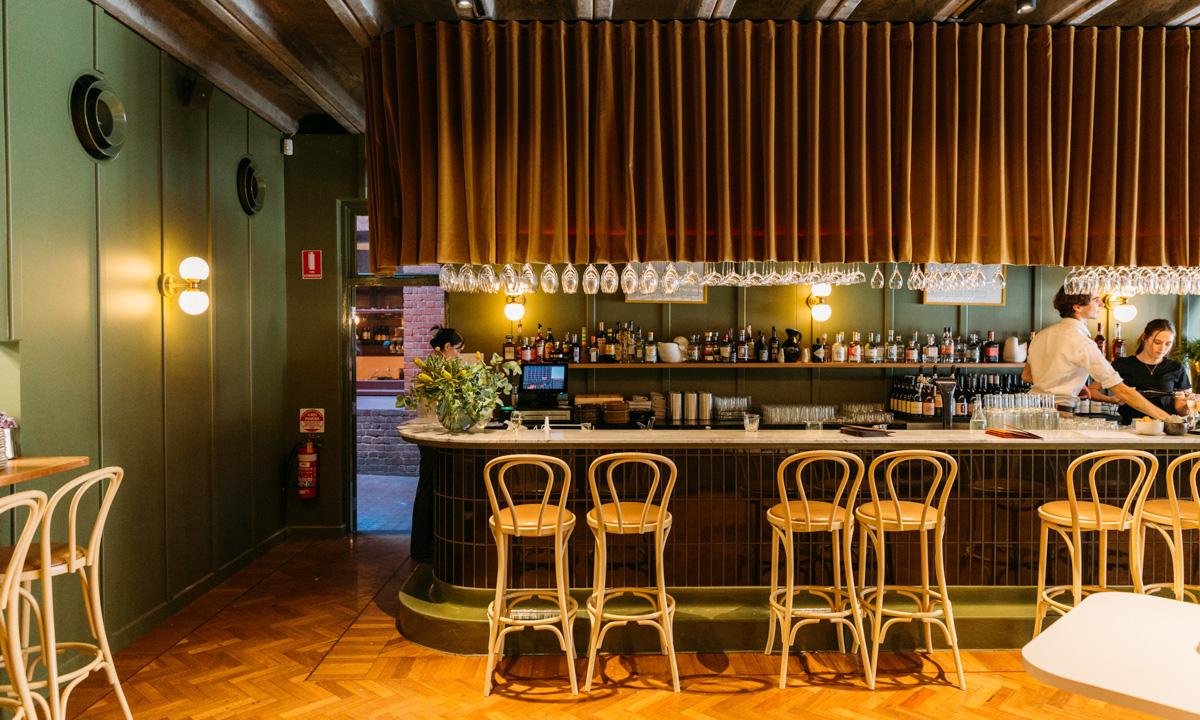 Tuna mornay dates back to the late 1800s, though many of us would have experienced this in one form or another in the late 1900s thanks to grandparents or parents who each had their own family recipe. For me, these mornay memories still send a (lumpy mashed potato and home-brand tuna flavored) shudder down my spine. And so, when a dish is described as a modern take on mornay is delivered to the table towards the end of a long lunch, a sense of dread takes over the pleasing nostalgia experienced so far.

We’re on the lower level of Two Pot Screamer, who set up their two-part venue last year in Adelaide’s East End, replacing Blackwood Bistro and Orana, the former best restaurant in the country. Upstairs is a swanky, bold and bright new lounge bar featuring 50 shades of on-trend pink and some equally bright cocktails. Downstairs, a patriotic facelift uses darker hues of green and gold, propped up by a menu designed to pay homage to some Aussie classics.

By now we’ve already tried some of the smaller bites, including lightly pickled segments of cucumber, topped with tarama dip, breadcrumbs and chives. There’s an air of familiarity about these tasty little bites and then the realization hits: it’s a take on a cucumber sandwich, with fewer carbs. Next comes the sausage sangas, this time with all the expected carbs. Served on white bread, the sausage is more of a chevapchichi, a sometimes Greek, sometimes Serbian formed mince sausage without a casing. This thin and flavorsome version is topped with a spicy bush tomato chutney and a splash of tzatziki. Greek it is. Simple? And it is. But fairly tasty, too. 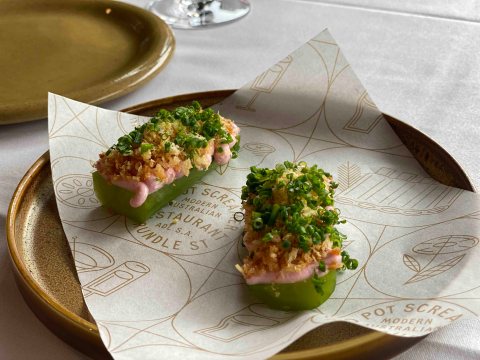 One Spot Screamer’s take on a cucumber sandwich. All food images: Paul Wood 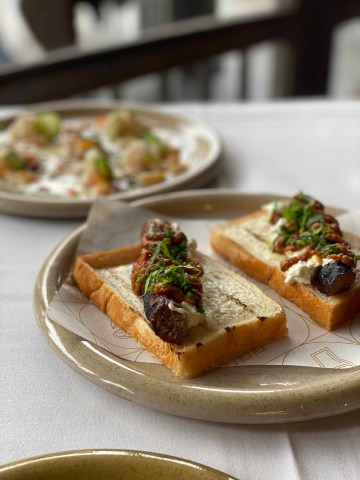 A snag on bread.

And then, a pile of potato scallops that might be straight from the fish ‘n’ chip shop, but for a strong truffle flavour. These are covered with grated parmesan and some fried and scattered leaves called blue bush – we’re told (by a very knowledgeable waitperson) that this is a bit like saltbush, but here it seems to add more garnish than taste. 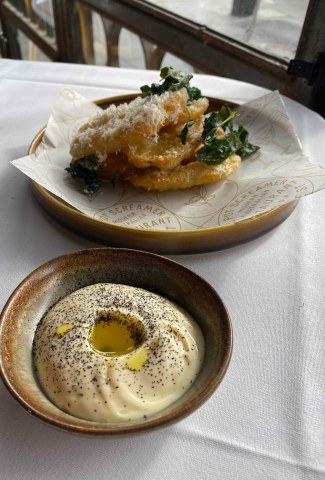 Things take a modern step with Kingfish sashimi curled into individual bites, floating in a zingy pool of sabayon that has an obvious and delicious mandarin scent and flavour. The artfully arranged plate includes fresh segments of mandarin, slivers of pickled fennel and a herb oil that cuts through the acidity nicely. Puffed wild rice and salmon roe add delicate pops of texture, and each organized little pile has a slice of pickle and floret of dill that ensures consistency with each bite. 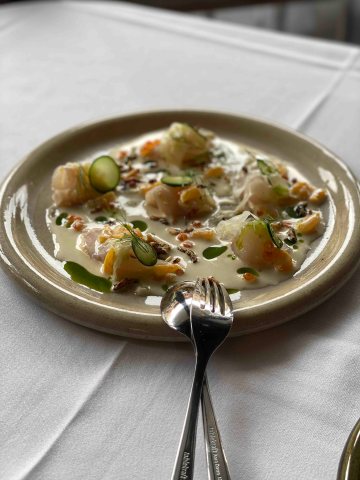 And now it’s time for that mornay, but thankfully there’s no tinned tuna or casserole dish in sight. In its place, a whole smoked trout is carefully dissected down the middle and splayed over a plate with its silky, gleaming fillets peeking out between a (generous) dose of creamy, cheesy sauce that’s been sprinkled with freshly baked and buttery breadcrumbs and topped with freshly told chives. A citrusy flavor turns out to be thanks to lemon myrtle added to a sauce that, while reasonably heavy, doesn’t overpower the dish, or more importantly, the fish. In complete contrast to some older versions, this is flavoursome, textural, and hearty. And perhaps, a turning point in history for the morning mistakes of the past. 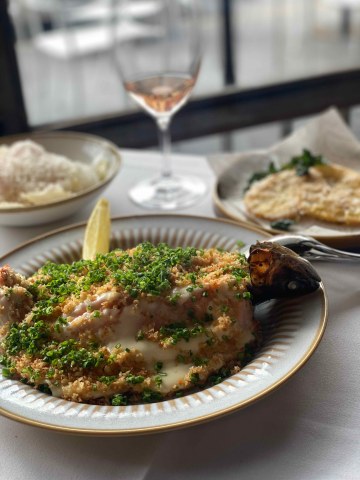 Nostalgia comes back into play in a serious way with Two Pot’s desserts. Think mango lamingtons with white chocolate mousse and coconut, or pavlova made using feijoa and topped with strawberry granita. However, it’s the earlier taste of mandarin that has us more interested in a dark chocolate, mandarin-infused torte. It’s dense. It’s intense. It’s everything a choc-orange lover might desire. Served as a slice on yogurt crème, topped with fresh segments, puffed rice and some crunchy nibs for texture, the shimmering slab is surrounded by salted caramel, because – why not? 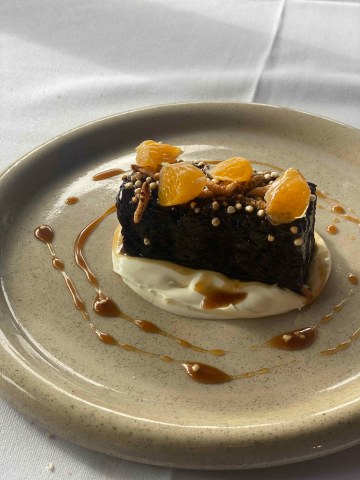 And “why not?” seems to be the (well-received) attitude of Two Pot Screamer, and a large part of the reason the venue seems to be filled with an entertained crowd most nights of the week.

Why not serve bread with a vegemite glaze? Why not add finger lime to grilled prawns? Why not try to recreate (and improve) some outdated Aussie dishes like apricot chicken?

And why not try the morning? Go on: your inner child will thank you.

Increase your impact by having your donations doubled

When you commit to a regular weekly, fortnightly or monthly tax-deductible donation to InReview, each scheduled donation will be matched by Creative Partnerships Australia. That means you’re supporting twice as many InReview stories to be commissioned, edited and published.