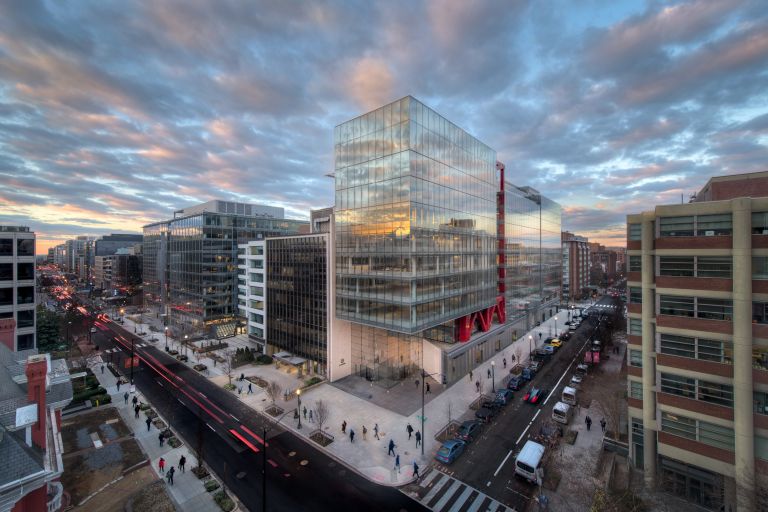 Developer JBG Smith sold his trophy office property at 1900 N Street in Washington, DC, earlier this month to Commerz Real, the real estate arm of Frankfurt’s Commerzbank Group, in a deal valued at $265 million. It’s the fund’s first acquisition in the DC metro area and comes as JBG Smith pursues a strategy of divesting office assets to focus on multifamily development.

“Washington, DC, is not the easiest market in the United States, but we believe that 1900 N Street is one of the best properties that you can buy and own right now,” Henning Koch, chief executive of Commerz Real, told Commercial Observer . “We see a good piece of real estate, and that’s what drives us forward.”

The acquisition of this property was the culmination of a search process that started more than four years ago. The investment firm, with assets of 35 billion euros, owns offices, shopping centers and hotels in Europe as well as in major US markets such as New York, Chicago, Miami, Philadelphia and Seattle, but this was its first acquisition in Washington. It had bid on other properties there unsuccessfully over the past several years. The addition of corporate headquarters to the area, such as Amazon’s HQ2 project, heightened Commerz Real’s interest.

The company made the acquisition with its open-ended Hausinvest real estate fund, which typically holds very little debt on European properties. To account for hedging costs of currency, however, foreign acquisitions typically hold higher levels of debt, and it financed 40 percent of the purchase. The fund is overall leveraged at only 8 percent.

Another factor that supported the acquisition was the opportunity for additional leasing. The N Street building was 82 percent leased at the time of acquisition, and existing tenants had an average weighted annual lease term of 9.5 years. The property’s annualized rent was $86.38 per square foot as of the first quarter, according to JBG Smith’s first-quarter shareholder letter. Tenants include CBRE’s mid-Atlantic headquarters and law firms Goodwin Procter and Beveridge & Diamond.

“If it was completely leased, it would have been too dry from a pricing perspective. We feel comfortable leasing up the space,” Koch said.

The 11-story building was designed by Kohn Pedersen Fox Associates, which also designed Hudson Yards in New York and The Scalpel office tower in London. 1900 N Street was completed in 2019 on a site that was previously seven separate lots and features 261,000 square feet of office space and 9,000 square feet of ground-floor retail.

The number of floors is atypical of office buildings in the Washington, DC, market, which limits building heights. Many other buildings have 12 floors crammed into a similar structure, but this building was designed with higher ceiling heights that differentiate it from commodity properties. CBRE’s Tommy Cleaver, Stuart Kenny and Dan Grimes represented seller JBG Smith in the transaction with Commerz Real.

JBG Smith will continue to serve as property manager and leasing agent. JBG Smith also sold its PenPlace development site to Amazon for the second phase of its HQ2 for $198 million around the same time in a separate transaction as the developer focuses on multifamily properties in the neighborhood where Amazon is building offices.

Although Amazon’s announcement that it would locate HQ2 in the area was the most significant announcement over the past several years, several other corporate headquarters have relocated to the DC metro. Plus, there is a different mix of office-using tenants than many other major US markets because of the high percentage of public sector employees. Law firms, too, have an outsized presence, and they have typically returned to the office at a much higher rate than the general population. A recent report from Kastle Systems said that legal office usage in Washington, DC, is at 64 percent of pre-pandemic levels compared with 41 percent for the overall metro.

Office usage is not reflective of the overall DC market, where wages have increased faster than the US average, according to commercial real estate data and analytics provider Markerr. Washington may have retained higher-wage jobs while some of the lower-paid workers left the market, Galen Faurot-Pigeon, Markerr research analyst, said in an email.

As for the impact of remote working, Commerz Real’s Koch expects collaboration to be key to the future of the office. “We believe that the world needs office space in the future even if we are working from home a couple of days a week. We want vibrant locations and a great environment close to shopping and bars and restaurants.”