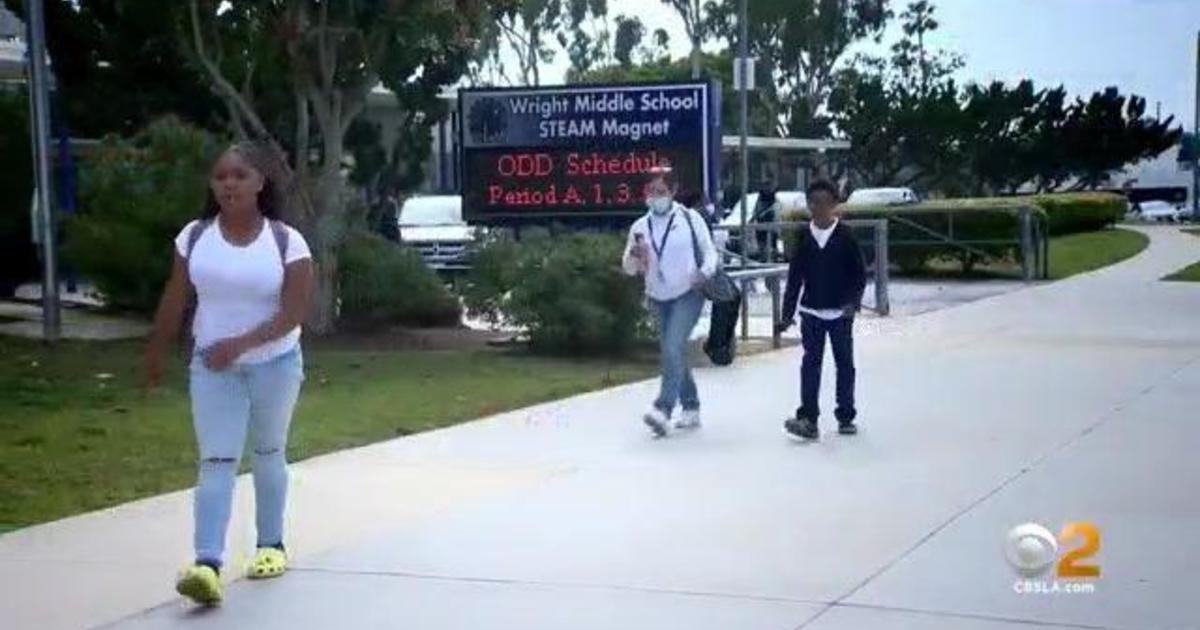 A Westchester middle school is at the center of a brewing controversy involving a charter school, the Los Angeles Unified School District and one of the largest Black student populations in the district.

More than half the student population at Wright Middle School STEAM Magnet is Black, a huge number even for a district as diverse as LAUSD. So, when teachers and staff learned that they may be getting kicked off campus, the felt targeted.

“Diversity for me means opportunity, and to be able to come to a school with opportunity,” said Darryll Holmes.

When Holmes went looking for a middle school for his son, he was immediately drawn to Wright STEAM Magnet in Westchester.

Black students make up only 8% of LAUSD, the second largest school district in the country. At Wright, where Paris Brown is a teacher, 60% of the students are Black.

“And the first day I came here and saw my class, I was so overwhelmed when I walked in and saw all those brown faces. I was just so excited and engaged and wanting to be here,” Brown said.

It’s now those students who are at risk of losing their campus. LAUSD has proposed moving Wright to a shared space with Westchester High School so that an independent charter school called Wish can take over the entire campus.

“It was like why? Why are you taking something improving yearly and taking away what we have put into the school?” Holmes said.

The staff at Wright told CBSLA the district is blaming the move on low enrollment.

“All across the district, enrollment is going down. So, there have been no stats or data presented as to how we compare to other schools,” teacher Mistral Davis said.

In its recently released budget forecast, LAUSD predicts it will lose another 36,000 students by the start of school in 2023. Enrollment was already down 6% at the start of this school year. However, Wright’s staff think there is more to the proposed move, especially now that its campus has been renovated.

“I will tell you what the optics are. We have a newly renovated campus, the library, the auditorium, the robotics lab. We have all been displaced for a period of time and now that everything is set and ready to go, they are moving us from our campus. And it’s a predominantly Black demographic. So, they are moving this student body to another campus and then turning over our fine, pristine environment to a different community and the demographics are different,” Brown told CBSLA.

Last year, the LAUSD School Board approved the creation of the Black Student Achievement Initiative. The district earmarked $30 million to address longstanding disparities in educational outcomes for Black students, such as graduation rates and test scores. Wright’s teachers said moving a predominantly Black student body off a campus to make way for Wish goes against that initiative.

LAUSD Board Member Nick Melvoin released the following statement regarding the situation:

“As the District explores the best ways to support the success and long-term stability of all our school communities, that process needs to include thoughtful conversations with families, staff, and community members.”

According to Great Schools, Black students make up 28% of the student body at Wish, less than half the percentage at Wright. Black students said that it feels personal.

“The reaction was like, ‘Why do you have to move us? Why us?'” eighth grader Ashton Johnson said.

In an email, Wish’s executive director told CBSLA the charter did not approach the district about taking over the campus, and that the school plans to maintain a “working relationship” with Wright for as long they share space. The executive director also said Wish has always wanted to be on one campus for “a greater sense of community” and taking over Wright’s space would allow for it to have grades K-12 in the same location.

The staff at Wright said they want the district to give them another year to boost enrollment before making any decisions.

“It seems like there is a lack of real understanding and humanity given that we have just come through a pandemic, and then to lob this at us out of nowhere?” Davis said.

CBSLA reached out to the district multiple times for an interview or a statement, and its only response was “it has no new updates.”

Wish’s executive director did say that move is not likely this coming school year. So, if the move did happen, it would be for the 2023-2024 school year.