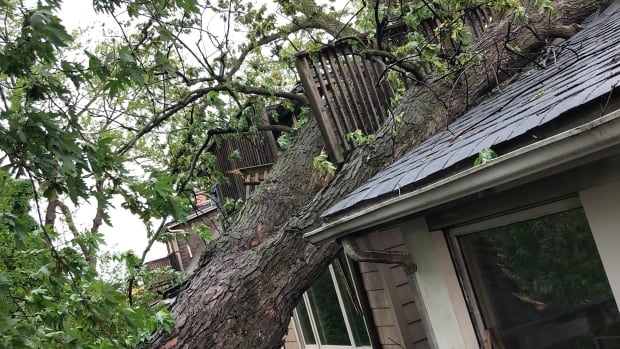 Five people are dead and others injured after “severe thunderstorms raced through” Ontario on Saturday afternoon, leaving behind “extensive” damage, according to Environment Canada.

At least 160,000 Ontarians were still without power as of Sunday at 11 am, according to Hydro One.

In Toronto, where winds were recorded between 89 kilometers per hour and 120 km/h, roughly 15,000 remain without power, according to Russell Baker, a Toronto Hydro spokesperson.

Toronto Mayor John Tory released a statement Sunday calling it an “all hands on deck response.”

He said the city received upwards of 1,500 forestry calls as a result of the storm and workers “will keep going throughout the holiday weekend.”

Damaging wind gusts reached as high as 132 km/h in the Kitchener-Waterloo region.

In Uxbridge Township, where winds were recorded at 100 km/h, Mayor David Barton declared a State of Emergency as a result of the storm.

“Residents should be prepared for a prolonged power outage,” he wrote in a public Facebook post, urging residents to “Please stay home for safety.”