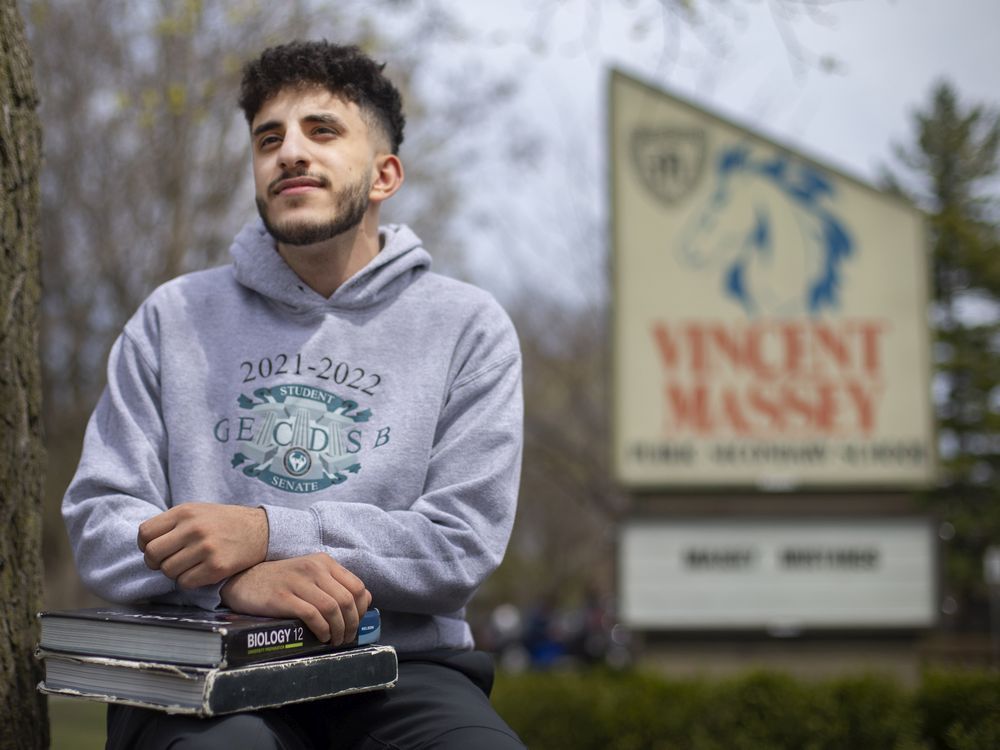 As an 18-year-old high school senior, Malek Mekawi plans to cast his first-ever vote in this spring’s provincial election.

The Grade 12 student at Vincent Massey Secondary School in Windsor is wrapping up his terms as a student trustee with the Greater Essex County District School Board and he has some strong opinions about what Ontario’s education system needs from a new government.

Ontario’s three major political parties are shaping election platforms on education at a time when students like Mekawi have suffered repeated, unprecedented disruptions to in-person classroom learning over the previous two years due to COVID-19.

“It’s no secret how much education has been disrupted by the pandemic for the past two years,” said Mekawi. “You can’t predict something like that but we can certainly learn from it and it’s clear online learning does not work.

“Students were overwhelmed and there were so many mental health concerns. So many students had a negative mental health issue as a result of online learning.”

Conservative leader Doug Ford has said Ontario will require its school boards to keep an online learning option for the 2022-23 academic year and that tutoring would be provided to students who need it. Students would also return to the standardized tests in Grades 3 and 9 that were halted for two years due to the COVID-19 pandemic.

Meanwhile, the Conservatives announced a 2022 budget April 28 with a heavy focus on hospitals and highways but “not a single new idea to improve on schools,” according to Liberal Leader Steven Del Duca.

Del Duca said this week, if elected, the Liberals would re-introduce Grade 13 on an optional basis.

He called the proposal part of a plan to help students dealing with the effects of the COVID-19 pandemic.

Del Duca this week released other plans of his education platform, such as building 200 new schools and repairing another 4,500, hiring 10,000 more teachers and capping class sizes at 20 for all grades.

The NDP, meanwhile, takes both the Conservatives and the previous Liberal government to task for “slashing $800 million from education.”

NDP leader Andrea Horwath has pledged to hire 20,000 teachers and education workers and clear a school repair backlog she says has ballooned to $16.8 billion under Premier Doug Ford’s watch.

“Children and young people have faced years of disruption — academically, socially and emotionally,” Horwath said. “They have had to deal with isolation, loss and mental health challenges.

“Students with learning difficulties and those from marginalized backgrounds were hit especially hard. (Ford) refused to spend the money to keep schools safe during COVID,” she said. “This is on top of andears of Liberal and Conservative funding freezes and cuts that have left our schools overcrowded, understaffed and with a multibillion-dollar repair backlog.”

Horwath described online learning as a “rough experience” and feels “kids need to be in school for their academic, mental and emotional well-being with in-classroom, face-to-face interactions with teachers and education workers.”

As it did in the 2018 election campaign, the NDP is calling for an end to standardized testing and debt forgiveness for post-secondary school graduates.

In addressing the mental-health crisis among youth, the NDP has pledged to hire more mental-health and child-and-youth workers, although no specific number has been given. The party also intends to create a new position at the school board level to “assess and improve the delivery of mental-health care in our schools.”

The Conservatives have vowed to “get students back on track” with $175 million pledged for a nine-month tutoring campaign that started in April and runs to December. They are also committed to two mandatory online courses as a requirement for high school graduation.

In recent months, Education Minister Stephen Lecce’s office has been firing out media releases announcing $500 million for ongoing and future school construction projects. The investment is touted as part of a 10-year commitment to invest $14 billion in construction, repair and renewal.

Committed to ending streaming in Grade 10 as part of its anti-racism strategy, Del Duca argued earlier this spring that the practice “perpetuates anti-Black racism and further segregates students from marginalized backgrounds.”

The Liberals have pledged to kill the Conservatives’ plan to build Highway 413 and redirect the estimated $8-billion price tag of that project into a five-year plan to build and repair publicly funded schools.

Inadequate and aging ventilation systems in schools across the province came under a spotlight as COVID-19 put children’s health at risk simply from sitting at their desks.

The Liberals have promised to cap class sizes at 20 students for all grades. The NDP said it will cap class sizes, specifically full-day kindergarten classes, at 26 students, and grades 4 through 8 at 24 students while stating only in general terms that it would reduce the size of high school classes.

Annie Kidder, the executive director of People for Education, which describes itself as an independent, non-partisan organization, said the next government needs to look beyond recovery and embrace renewal.

“What we need to do following the pandemic is look at all the impacts it had and also all the cracks it exposed,” Kidder said. “It can’t just be about recovery, it has to be about renewal as well. We have to look at what we found out about all the things that haven’t been working all along, all the inequities that were amplified.”

Kidder noted that “we’re behind in education anyway in terms of skills and competencies for long-term success to navigating life,” and that the next governing party needs to reconsider what the basic needs in school are against the backdrop of a fourth industrial revolution.

The president of the Ontario Secondary School Teachers’ Federation made a recent swing through Southwestern Ontario to endorse primarily NDP candidates.

Karen Littlewood said the OSSTF seeks “a robust, publicly funded education system fueled by investments in communities and public services. This means connecting education priorities with issues affecting the whole community, such as reviving the struggling manufacturing sector, combating job burnout for educators and other workers and investing in affordable housing.”

Littlewood said the union wasn’t offering a blanket party endorsement, but rather was choosing candidates based on how their beliefs regarding education align with the OSSTF vision.

The union, which represents 60,000 teachers and education workers, has so far endorsed the odd Liberal candidate and two Green Party candidates. It has not endorsed a PC candidate yet.

As for Mekawi, who is headed to Western University this fall, elementary and high school students need help and soon, he said.

“Now that we’re back in person you can see how students have struggled and it’s clear how much we have fallen behind,” he said.

“There are kids in senior level math and science struggling with the first unit of a Grade 11 course they were supposed to learn while they were sitting in bed with a laptop.

“Students are not prepared for the courses they’re taking.”

— With files from the Canadian Press