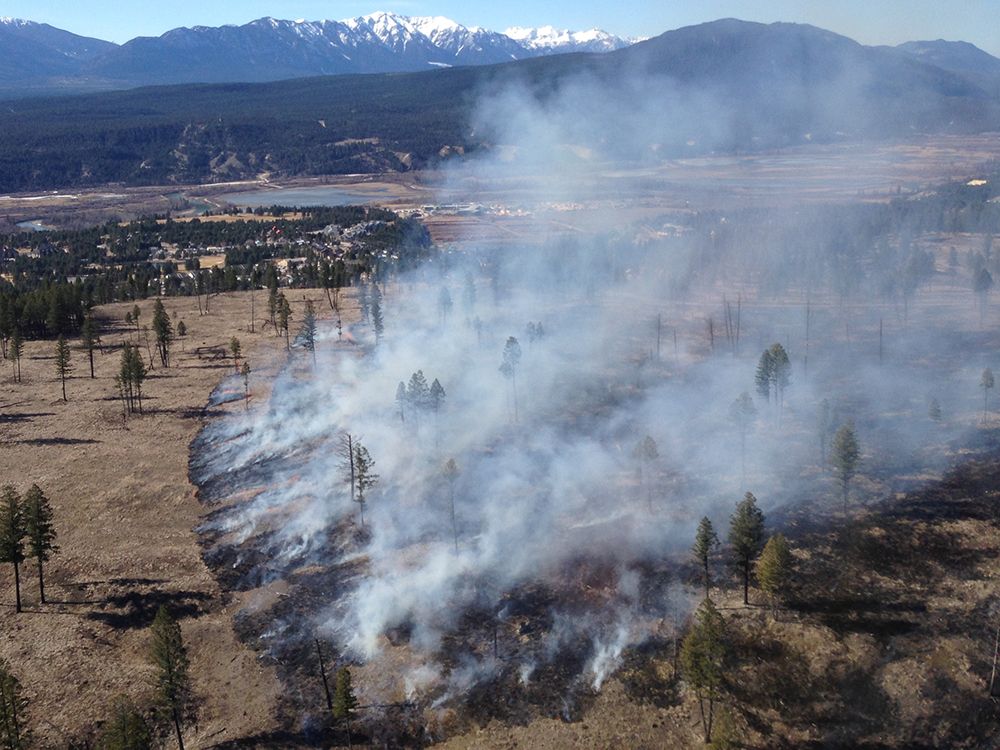 Prescribed burns are scheduled at national parks around southern and central Alberta over the next few weeks as Parks Canada prepares for the summer wildfire season.

In Banff National Park, the first of seven burns slated for 2022 began Thursday just north of the town center and the Trans-Canada Highway on the side and base of Cascade Mountain. A large area on the southern face of the mountain, including the Banff Airfield and recreational trails, has been closed to the public.

The burn, the closest to a population center that will occur in Banff National Park this year, will help restore wildlife habitats in the valley, promote the growth of deciduous trees and grasses, and mitigate wildfire risk to the Town of Banff. Burns around the park are scheduled in the spring and fall.

“A lot of our prescribed fires, pretty much all of them, are to restore fire to the landscape after over 100 years of fire suppression, and they all serve a purpose to reduce wildfire risk to the public and to the communities,” said Banff National Park fire and vegetation specialist Jane Park.

“(The fire) just outside of town here has a strong wildfire risk reduction objective to it. The more prescribed fire we get out on the landscape, the more we create landscape heterogeneity — like a mosaic of different aged forests — that makes the whole landscape more resilient to wildfire in the summer.”

Smoke from a prescribed burn near Jasper closed a local highway and caused Environment Canada to issue a special air-quality statement for the Jasper National Park and Hinton-Grande Cache areas on Tuesday, which came to an end Wednesday morning. Park said the burn in Banff isn’t expected to have similar setbacks, but there are safety plans in place if smoke ends up reducing visibility on Highway 1.

“We don’t anticipate that there’ll be any significant smoke issues (in Banff). The type of fuels that we’re burning are grasses and not necessarily that much standing timber,” said Park.

“We try to . . . burn under the conditions where the wind will blow smoke away from town, but obviously the weather is something that we can’t control.”

UPDATE ⚠️
The prescribed fire at Henry House Flats has produced more smoke than was anticipated, resulting in necessary closures of #Highway16 east of Jasper. Motorists should continue to monitor @511Alberta for more information. https://t.co/P55IBkrys2

Parks Canada also began a prescribed fire operation at Waterton Lakes National Park on Wednesday at a 1,170-hectare area south of the Chief Mountain Highway and east of Lower and Middle Waterton Lake, known by officials as Y-Camp. The burn, which has taken place every seven years since 2008, will help restore native prairie by reducing aspen and evergreen tree expansion onto grasslands. Encroaching trees have replaced around 30 per cent of the grasslands in the area over the past 100 years, according to park officials.

“In addition to improving grassland health, this prescribed fire will also help reduce the risk of wildfire for neighbors on the park boundary,” said a news release from Waterton Lakes National Park.

People who enter areas closed for prescribed burns could face fines under the Canada National Parks Act up to a maximum of $25,000. For more information on prescribed burns at national parks this year, visit pc.gc.ca.