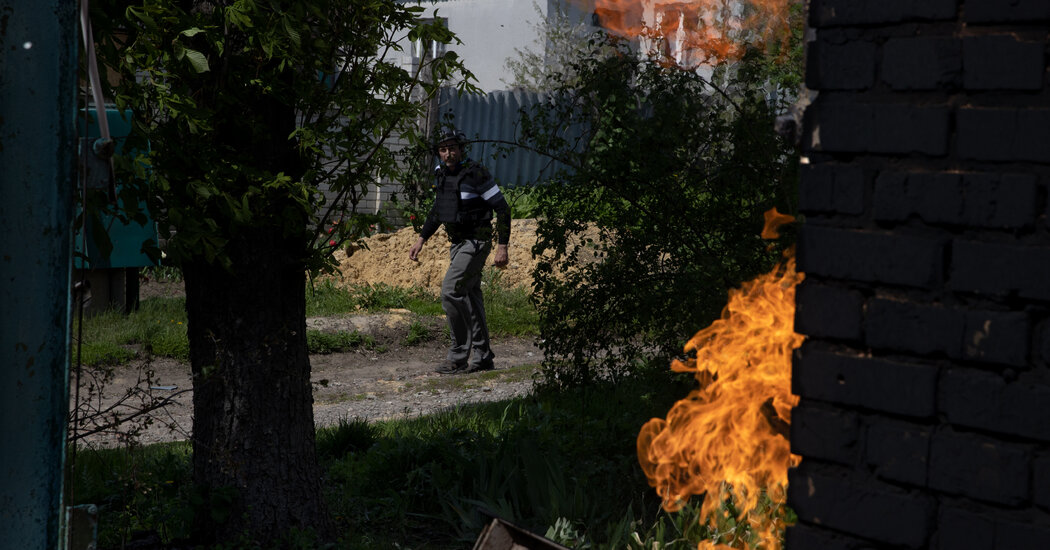 The advances by the Ukrainian army in the north have been modest, but they are emblematic of both sides’ strategy: maneuvering artillery to gain territory.

RUSKA LOZOVA, Ukraine — The Ukrainian major had a few tasks to complete as he made the rounds along his army battalion’s front line. One platoon commander needed anti-tank weapons. Another wanted to show off a new line of trenches that his forces had dug following a recent Ukrainian advance.

But as he drove between positions in his camouflaged armored van near the town of Derhachi, the clock was ticking. A Russian surveillance drone hovered above, watching, sending back coordinates to Russian artillery units. About twenty minutes later, at least three shells rained down, forcing the major and his team to scramble.

“They’re getting better,” said the major, named Kostyantyn. “They know our positions, but they saw the car coming and started to fire.”

The Russian front lines north of Kharkiv were stagnant for more than a month. But over the last several days, Ukrainian forces have advanced outward from the city, launching a concerted offensive to the north and east that began with heavy shelling and an infantry assault supported by tanks and other armored vehicles.

Though the gains have been modest, they are emblematic of both the Ukrainian and Russian strategy as the war drags into its third month: a slow moving grind that focuses on one village at a time and relies primarily on drones and concentrated fire with artillery.

These weapons, capable of lobbing ammunition outside the direct line of sight of opposing forces, are now the central component of the war following the Russian defeat around Kyiv, where long columns of troops and tanks were visible targets vulnerable to ambush. Without them, Ukrainian and Russian units cannot advance nor can they really defend.

The back and forth maneuvering is playing out across Ukraine’s east — both as Russian forces advance in the Donbas region, and as Ukrainian forces try to force Russian artillery units out of range of Kharkiv, a sprawling city 25 miles from the Russian border.

“This is a war of position, a war of artillery,” said Kostyantyn, the major, who declined to provide his last name for security reasons.

This dynamic has played out for days in Ruska Lozova. The town, just north of Kharkiv, was declared liberated by the Ukrainian military late last month, though the fleeing enemy soldiers have been replaced by incoming artillery shells, and terrified residents continue to evacuate.

Russian drones, namely the small Orlan 10, which sounds like a lawn mower, have proven to be a lethal, loitering presence. The drone’s ability to identify Ukrainian positions for Russian artillery batteries has meant that every foot of gained ground around Kharkiv is met with heavy shelling.

“They have an Orlan hanging up in the sky, they see the positions, target them and fire,” Kostyantyn said. The Ukrainians have their own drones — many of them small over-the-counter types — capable of delivering similar results.

The Russians occupied Ruska Lozova, a town with a prewar population of about 6,000, midway through March, residents and Ukrainian military officers said, after they had been pushed back from Kharkiv in the preceding weeks. It is unclear how many Russian soldiers were garrisoned there, though residents estimate that it was somewhere in the hundreds given the number of vehicles in the town.

Ruska Lozova is a pleasant suburb of single story homes, bisected by the Lozovenka river. Many of its residents are avid hunters in the nearby forests and open fields. But the town’s strategic military importance lies in its hills, which offer a direct line of sight into Kharkiv, several miles away.

Once they took Ruska Lozova, Russian soldiers positioned artillery on the high ground and began firing into Kharkiv. To the north and east of the city, Russian soldiers set up other artillery positions in nearby villages and expanded the bombardment. The Ukrainian military returned fire from artillery positions in locations in and around the city that were staggered to ensure some are out of range of their Russian counterparts.

The result was a duel between weapons like multiple launch rocket systems, some with ranges of roughly 20 miles; howitzers, with a range of around 13 miles and heavier mortars, capable of lobbing shells around five miles.

“Both sides are using artillery to deny the other side the ability to maneuver,” said Michael Kofman, the director of Russia studies at CNA, a research institute in Arlington, Va. “And they’re pairing it with drone-based intelligence.”

For the Ukrainians, taking back Ruska Lozova became a priority, a way to relieve pressure and shelling on the northern portions of the city.

Kostyantyn’s unit, a Special Forces battalion, along with other forces, took part in the assault. The first part of the operation, he said, was suppressing and eliminating the Russian artillery around the town before advancing. Residents of Ruska Lozova said that as Ukrainian troops arrived, in late April, the shelling was relentless.

“Every house is damaged, everything is burning. It’s smashed to a pulp,” said Natalia Chichyota, 41, the day after Ruska Lozova was liberated. At least two civilians were killed there during the occupation.

Tanks and armored personnel carriers followed the Ukrainian artillery barrage, Kostyantyn said, explaining that the mechanized troops were able to move more easily after the Russian artillery had been all but silenced and displaced.

“After we suppressed their firing points with artillery, our vanguard entered,” he said, adding that Russian air support arrived soon after. Residents said the Russians had used airstrikes that left large craters, especially around one of the churches in town, but were nowhere near as frequently as artillery fire.

Victory Day concerns. There are growing fears among Western officials that Mr. Putin may use the Russian holiday on May 9, which commemorates the Soviet Union’s triumph over Nazi Germany, to turn what he calls a “special military operation” in Ukraine into explicit, all-out war .

Russian oil embargo. The European Union unveiled a plan to halt imports of Russian crude oil in the next six months and refined oil products by the end of the year. If approved as expected, it would be the bloc’s biggest and costliest step yet toward ending its own dependence on Russian fossil fuels.

What followed after Ukrainian tanks and infantry entered the town is not exactly clear. Residents said the first Ukrainian soldiers arrived outside their homes around April 26. Ruska Lozova was declared liberated on the 28th. The Russian retreat, by all accounts, was relatively orderly.

During that time frame, Kostyantyn said, there was a “rifle battle” around the town between Ukrainian and Russian troops, an uncommon occurrence during this stage in the war, which had mostly featured artillery, rocket and mortar fire.

“Now we are digging trenches there, they are firing at us with artillery from another village,” said Kostyantyn. The Russian artillery withdrew to a village further north called Pytomnyk. The bridge on the main highway that connects the two towns has been rendered unusable, likely delaying any further Ukrainian advance.

“And like that, village after village, we push them back from Kharkiv.”

The major did not disclose the number of Ukrainian casualties suffered in the battle, nor did he disclose any estimates of Russians wounded and killed. But any type of offensive operation like the one to capture this town almost certainly entails losses on both sides.

Ruska Lozova may have been freed from Russian forces for now, but the war has hardly disappeared. Like so many other towns and cities across Ukraine, it is trapped in the “gray zone” — the land between Russian and Ukrainian forces — and prone to frequent shelling.

“The drones have been flying for days,” said Sergiy, a resident of Ruska Lozova, who fled on Tuesday to Kharkiv. “As soon as soldiers appear, the shooting starts.”

In recent days, much of the remaining population fled into Kharkiv; some are picked up by humanitarian aid convoys made up of volunteers driving their own sedans, mini buses and vans into the destroyed town.

One such run occurred earlier this week when Oleg and Mykola, volunteers from a Baptist church in Kharkiv, drove their 1996 white Mercedes van into Ruska Lozova. They darted around the town, looking for families who wanted to evacuate and handing out shopping bags of food to those who wanted to stay.

It was only toward the end of their hourlong mission, as several people piled into the van, Russian artillery began to shriek in — one round after another creeping closer to their idling vehicle as they struggled to fold an older woman’s walker and load luggage into the back. The passengers crossed their hearts and prayed.

This was what being liberated meant in this chapter of the artillery war, in which the frontline isn’t so much defined by trenches, but the range of the guns on either side.

They drove back toward Kharkiv, the aging van heaving to get up the hill that had once been a perfect vantage point for Russian forces. It was Oleg’s seventh trip into Ruska Lozova since Ukrainian troops reclaimed the town.

“Today was a good day,” he said, straight faced, after making it back into the city. “It was pretty quiet.”