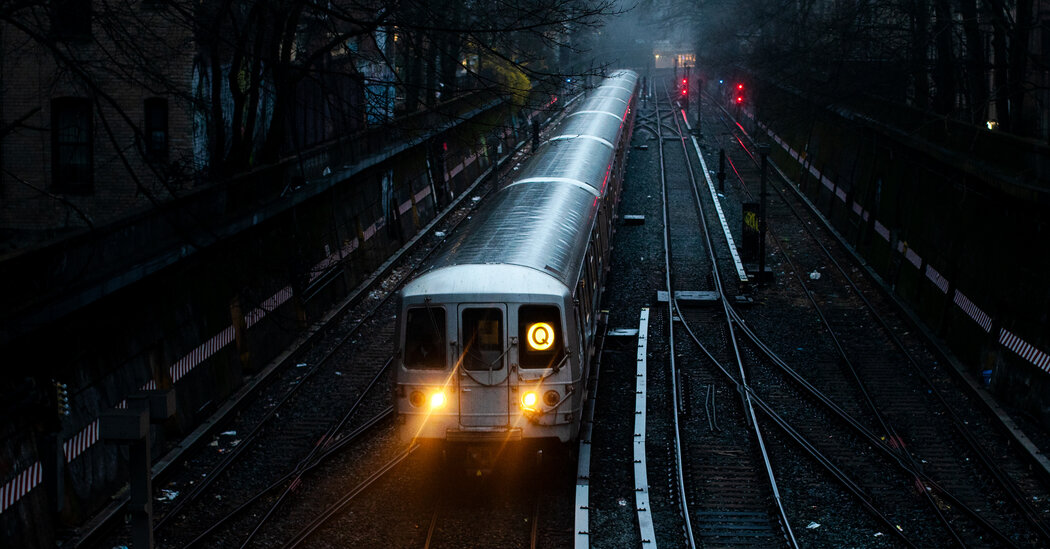 A New York City subway rider died early Thursday after he got stuck between a Q train he was exiting and the platform and fell into the tracks, the Metropolitan Transportation Authority said.

The episode took place late Wednesday night at the Avenue M station in Midwood, Brooklyn. The man, identified as Marcus Bryant, 37, was taken to Maimonides Medical Center, where he was pronounced dead shortly after midnight.

Police officials had said early Thursday that witness accounts suggested Mr. Bryant’s clothes had gotten caught in the door of a train car. But Richard Davey, the president of New York City Transit — the division of the MTA that oversees the subway — later contradicted those accounts, and the police said they would defer to the MTA’s investigation.

“We do not believe this was a door incident,” Mr. Davey said at a news conference Thursday afternoon.

Mr. Davey said Mr. Bryant “was caught between the train and the platform and later fell into the pit, on the tracks and a second train came over.” It was unclear if the second train had struck Mr. Bryant.

Cameras at the station were working at the time, the MTA said, but the agency declined to release footage, citing the ongoing investigation.

A spokesman for the Transport Workers Union Local 100, which represents subway and bus workers, declined to comment.

In 2019, at least two people were killed after getting dragged by New York City subway cars.

That February, a man who was heading home to Queens died at the Grand Central subway station when he was pulled into a tunnel by a moving train. The man, Vicente Alatorre, 39, was unconscious when the police arrived and was pronounced dead at the scene by paramedics.

And a few months later in April, Helen McDonald-Phalon, 21, died after she became wedged between a train and the Union Square subway platform at about 3:30 am, according to news reports at the time.

While Mr. Bryant’s death appeared to be accidental, the New York City subway system has been dogged by concerns about safety since ridership plummeted during the pandemic.

A Goldman Sachs employee, Daniel Enriquez, was shot and killed on the same Q line in late May. The killing came just days after officials had heralded a milestone: 3.6 million subway trips in a single day, a pandemic-era record.

In April, a gunman fired 33 shots on an N train traveling through Sunset Park during the morning commute, wounding 10 passengers; more than a dozen others were injured in the chaos. And in January, Michelle Go, an employee of Deloitte, was killed after she was pushed onto the tracks at the Times Square station.