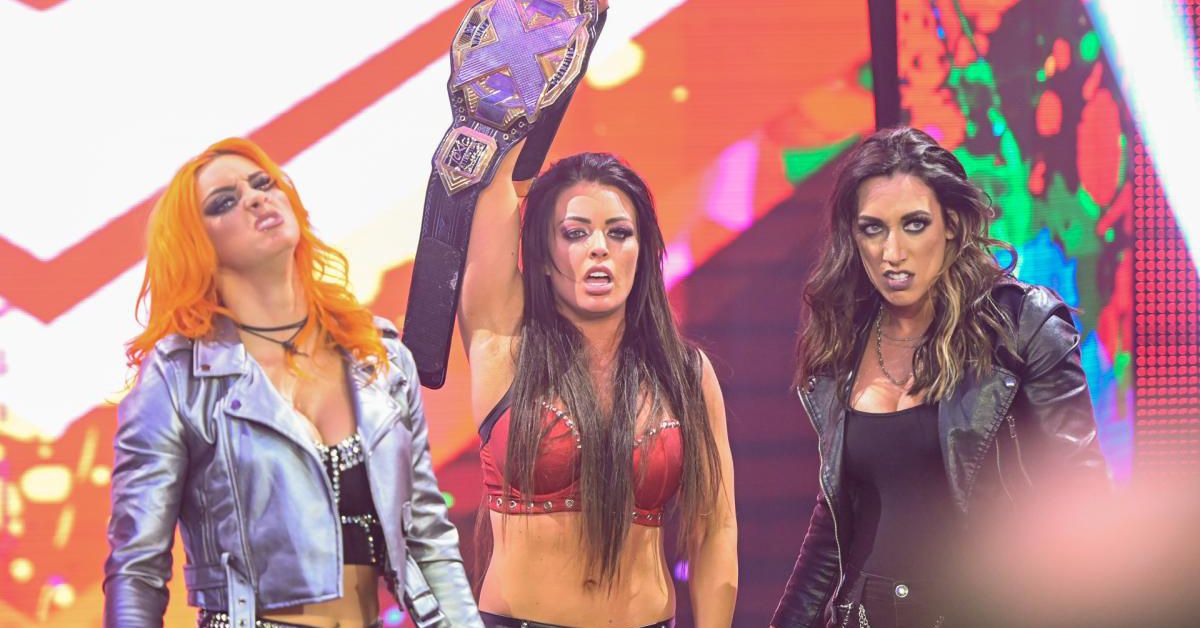 NXT is in your world with the Vengeance Day go home show. We got a championship main event, a couple Dusty Cup matches without Dusty finishes, and several seeds sown for future developments. Holla at Claire, show her your love for her blog de ella, then come back here for all the news that’s fit to recap.

Not going to bury the lede here: The Creed Bros. and Grizzled Young Veterans put on an incredibly dope tag match this week. Their Dusty Cup semifinal opening contest didn’t waste one second of its 20 minutes, with the Brothers Creed attacking GYV before the bell rang. Not only do they dislike GYV—who doesn’t?—but they cannot wait to get their hands on Imperium. There’s levels to this sh*t. It wasn’t just about their hate for the team they’re facing nor their distaste for the tag team champs. But they want that Dusty Cup to prove their worth.

This was brutal because both teams always choose violence. And, beautifully, the violence escalated. Knees to the ribs gave way to a throat thrust. A throat thrust gave way to a very dangerous suicide dive outside the ring. That move gave way to a giant superplex. You get the point. Every move built off the previous move, just like every wrestling match should.

The most telling moment of the match was how GYV snatched defeat from the jaws of victory. After hitting a Doomsday Device, it looked like this thing was in the bag for the Vets. Only for the ref to realize a one of the Vets’ foot was under the rope, resulting in just enough time for the down Creed brother to recover and kick out once the proper pin count came.

On the other side of that equation was the Creed Brothers realizing how important details are. When it was time to finish GYV and send him to the showers, Brutus stopped Julius from getting the final blow because Brutus was the legal man. That split second difference showcased the difference between the teams. While they’re both equally matched physically, the Creed boys are just a tad smarter.

This week, that extra brain cell or two made all the difference.

A bit about Mandy Rose: She’s good. And in her role, she’s very good. Mandy isn’t going to give you the same thing Sasha Banks, Bayley, Kay Lee Ray, or anything else the other vaunted women who called NXT home will give you. Every wrestler isn’t built the same nor do they all serve the same purpose. Mandy is a heel champion specifically selling the idea she’s the sexiest person on God’s green earth. From my vantage point—this comfy couch—she’s not far off from the truth.

But she also epitomizes an attitude that I want from my heels: Ruthlessness at all costs. Mandy is willing to do whatever and whenever to hold onto power. Mandy will put up a fight, just like she did against KLR this week, and show that maybe she is good enough to win cleanly. But then she’ll go the extra dirty mile just because. WWE is in dire need of heels who cheat to win rather than heels who win the respectable way. In their world, particularly in NXT, Mandy shines in this role. She plays to her strengths de ella, gets her competition over in the process, and is n’t afraid to look foolish or like a chicken sh*t to boot.

Whew, okay, with that out of my system, let’s talk about the match proper. It was good. Like I said above, this is the match you execute when you’re not selling your champion on how great of a wrestler they are. KLR put Mandy over like a million and two bucks, making her look like a vicious woman possessed by gold.

But remember what I said about cheating? Right when it looked like Kay was picking up momentum, along came Toxic Attraction to ruin her fun from her. Thanks to the Toxic interference, Mandy got the win with the rollup, and she and her crew from Ella looked ready to beat KLR with the bat she loves so much.

But wait, here comes a new challenger into the chat.

Io Sharai, in need of a new tag partner, made the save and stood tall with Kay Lee Ray. Whether this makes it official or not is to be determined, but it looks like Ms. Sharai found her new running buddy for the women’s Dusty Cup tourney. Will it work? Will KLR focus on the tournament when we know all she wants is Mandy? Will the old Batman tv show cliffhanger voice stop running through my head when I ask these questions?

Find out next week. Same NXT time. Same NXT channel. Syfy. Because of the Olympics.

MSK All the Way

Edris Enofe and Malik Blade showed up and showed out. They didn’t get the win—shoutout to MSK—but they carried their weight in this very good tag match. This was a great showcase for Enofe and Blade, two guys NXT clearly believes in but only given a few moments to shine. MSK vs. The Creed Brothers is a great Dusty Cup final, but Enofe and Blade let the world know they got something to say.

As far as the story of the match goes, MSK’s edge in experience was the difference. Enofe and Blade just took a tad too long to go for the kill shot when the opportunity presented itself. MSK didn’t, and that’s why they’re one match away from holding that beautiful cup one more time.

Pete Dunne defeated Draco Anthony in a match that never quite grabbed my attention. It wasn’t bad but it was obvious the match was never the point. Before the ding, Joe Gacy approached Draco with an apparent enticing invitation into his cult of personality. Or whatever you want to call it.

Pete Dunne was interviewed about his upcoming match at Vengeance Day with Tony D’Angelo. So, yeah, it was only a matter of time before all those paths converged.

Tony D. tried to attack Dunne during the match but failed miserably. Joe Gacy and Harland watched from the Crow’s Nest. Anthony put up a fight but was dismissed by the Bruiserweight shortly after Tony D showed us all he sucks at sneak attacks. Which is weird considering that type of thing might come in handy for a guy in that line of work.

Dunne went wild, found everything under the ring except a bathroom stall, and demanded the cage match at Vengeance Day have weapons on said cage. Do you know what that means? More than hearts will break next week at Vengeance Day.

I wanted to like this segment more. Santos Escobar vs. Bron Breakker has potential because they’re diametrically opposed. While they’re both wrestling royalty, they just see the game differently. Instead of examining what it means to have a pedigree in wrestling and exacerbate those differences in their background, we lost the plot.

Dolph Ziggler showed up, reeking of scumbag entitlement, and inserted himself into the literal middle of the champion and his challenger. Then we got Tommaso Ciampa, who wanted beef with Dolph and escobar.

In the end, Dolph and Tommaso tangoed while Santos and LDF put Bron through a table.

I know it worked for the home team crowd, but from my cheap seats on the couch, it felt like a lot of unnecessary action. Sometimes, less is more. Hopefully their match is delivered more than their go home segment.

Sarray defeated Dakota Kai in a pretty good match. Pretty quick too, but both of these women know how to do a lot with a little.

LA Knight doesn’t want Sanga; he wants Grayson Waller. Knight got through Sanga by using Waller’s nefariousness against him. Waller, as cheaters are wont to do, tried to cheat. Waller to revealed the turnbuckle and distracted the ref. This chicanery allowed LA to gouge Santa’s eyes, which then led to the big man diving head first into the uncovered turnbuckle.

This was fine. the match was never meant to be a classic or anything worth standing up for. Sanga was a bridge to Waller. Consider that bridge burned.

Duke Hudson, with his new attitude, wished Indi Hartwell good luck in her upcoming tag match. Guess who got in her feelings from her? Persia Pirotta. So much so that Persia believed it was Duke on the other end of Indi’s phone de ella receiving her sweet nothings de ella. Somehow ignoring the fact Indi is smitten by her husband de ella. So much so that Persia wrestled several tag matches on the dolo tip as a result.

Anyway, Gigi Dolin and Jacy Jayne showed up—fresh off their kidnapping—to instigate, and a fight broke out. Vengeance Day is coming and one of these two teams isn’t on the same page. I don’t particularly buy the “why” though.

For the Love of (Daddy’s) Money

Consider me surprised here. Tiffany Stratton defeated Wendy Choo. Wendy and Amari Miller went on a shopping spree with Stratton’s credit card and Stratton got her revenge. Not only was it over before it started but I think Wendy going over was the right call here. meh

There were a couple dry spots on this show but it was a pretty entertaining two hours of television. We got some hype videos for Cameron Grimes and Carmelo Hayes—the barbershop setting for Hayes was a good idea but not the best execution—and a whole lot of set up for Vengeance Day.

Oh, and Nikkita Lyons is ready to whoop ass and look good while doing it, in case you needed another reminder.

That’s my grade and I’m sticking to it. Your turn.