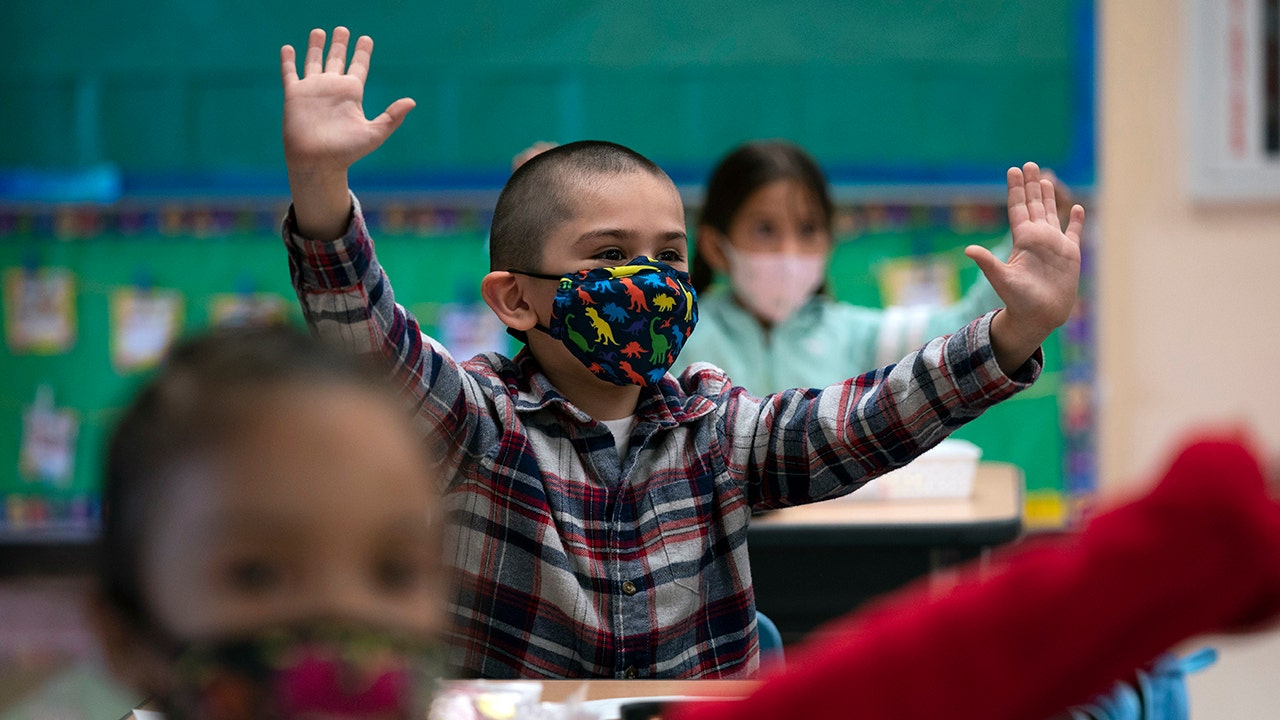 Speaking to Fox News Digital from her home in New Jersey, a mom of a 3-year-old boy who has developmental speech delays said of the mask mandates that still exist in her state as of right now, “For speech therapy for a toddler , masking isn’t exactly what you should be doing, at least in my opinion.

She said, “It’s like if a dentist required the patient to wear a mask, right? I think for speech therapy for a child, it’s the same thing.”

The mom did not want her family’s name used due to privacy concerns. She also said she lives in “a liberal area” and would feel uncomfortable if it became known within her community that she’d spoken out on this issue.

Gov. Phil Murphy of New Jersey, a Democrat, said this week that the Garden State will be lifting its school mask mandate for children and staffers. Yet the state’s mandate will remain in place for another month — until March 7, 2022.

The mom in New Jersey described a troubling scenario she and her family faced recently — one that still gets her upset and angry when she discusses it.

She said her young son, whose speech is delayed, was receiving regular speech instruction from a therapy practice. His therapy for him started, coincidentally, around the beginning of the COVID pandemic. At that time, he was not wearing a mask.

But then, because of state mask mandates as well as continuing concerns about COVID transmission and infection in early 2022 — and once a therapist in the practice became pregnant — the mom was told by email that her little boy, out of an abundance of caution, would have to start wearing a mask during his sessions.

“All patients, they told me, had to begin wearing masks in order to receive treatment,” the mom said.

A child is shown wearing a mask indoors while working on a school project in this file photo.

Though the mom protested — how could a three-year-old child be masked during speech therapy? — she got nowhere, even after she escalated her concerns to the owner of the therapy services firm.

Again she was told that her son could no longer receive therapy at that location unless he was masked. She was told, “If you don’t put a mask on him, we can’t provide services anymore.”

So “they kicked us out” of that therapist’s location, the mom said. She was shocked.

She was also informed that if her son didn’t or wouldn’t comply with the new mask requirements — she had the option of driving him to a different therapist’s location 45 minutes away within the same practice (for the same services).

Different therapists in different locations had different masking policies, she was told. So maybe she’d have better luck somewhere else.

“But I was not going to do that,” she told Fox News Digital about her reply to the firm. “Really? Drive 45 minutes there and back with a three-year-old” in the car, all because the practice had decided it wouldn’t give speech therapy to a child who wasn’t masked?

“I did not want to go to another location within the practice,” the mom said, adding that “things got a little bit heated.”

She was told to “push” for her son to wear a mask during therapy — but she refused. “I have put a mask on my child in other situations when I’ve had to,” she said, “but not for speech therapy for a three-year-old!”

See this tweet below from a few weeks ago about this particular mom’s story.

Ultimately, the mom said, after a lot of pleading and pushing, she was able to work things out with the original therapist’s office.

“I’m not a person who complains about things for the sake of complaining,” the mom said. “But I had to stand up for my son in this situation. It didn’t make sense to me.”

She noted that her young son, like so many other kids, doesn’t wear the mask properly all the time. “It slips off his nose from him. He’s a little kid. It happens. So how much protection was the mask really providing anyway?”

After all the drama and upset, her three-year-old son is now back receiving therapy once again from the original therapy location, she said, without a mask on his face. For now, he’s making progress with his speech, she said — but there’s a catch.

“My son was a preemie, born at 30 weeks. He had to have a respirator when he was born. I don’t think he should have a mask on.”

The therapist herself is today wearing not one, but two masks during the sessions — plus a face shield.

“So we will probably have to find another therapist” in the near future, the mom said, “because my son’s going to have to learn how to position his tongue correctly to make certain sounds.”

He also needs to be able to see a therapist’s face to model the right positioning.

The mom remains perplexed and upset about what happened to her son and her family amid the mask mandates in New Jersey.

A child is shown wearing a face mask on the first day of New York City schools amid the coronavirus disease (COVID-19) pandemic in Brooklyn, New York, on Sept. 13, 2021.
(REUTERS/Brendan McDermid/File Photo)

Regarding masking across the board, she said, “You can’t have something” set in stone “for 100% of the people 100% of the time,” the mom said.

“The world doesn’t work that way.”

There have to be “nuances,” exceptions and allowances for individual circumstances, she said.

She also noted that in the “liberal” area where she lives, it’s very “difficult” to be able to speak out freely against masking.

“We have enacted blanket policies and anyone who doesn’t fit in a traditional box (someone able to wear a mask, for example) — we’ve kicked to the curb and denied treatment and care.”

Fox News Digital reached out to Bethany Mandel, who shared the anonymous mom’s story on Twitter recently. Mandel is a contributing writer to the Deseret News and editor of the “Heroes of Liberty” book series.

Mandel told Fox News Digital in a phone interview, “Over the course of my own reporting about the impact of mandates and lockdowns on special needs children during this pandemic, I’ve heard from countless families” about their issues and problems, she said.

“Special needs children have had their access revoked to education settings, like museums, schools, and therapist offices,” she added. “We have barred millions of our most vulnerable citizens out of public life for two full years with nary an outcry.”

Bethany Mandel told Fox News Digital, “We have barred millions of our most vulnerable citizens out of public life for two full years with nary an outcry.”

“For children, this is especially damaging,” said Mandel.

“There is but a short window for treatment for children with developmental challenges — and our society has denied that to them for two years.”

She noted, “There has been nothing resembling a conversation about tradeoffs. We have just enacted blanket policies and anyone who doesn’t fit in a traditional box (someone able to wear a mask, for example) — we’ve kicked to the curb and denied treatment and care.”

“It is a deep betrayal,” Mandel also said, “and one that will have lifelong consequences for millions of special needs children.”

Dr. Meg Meeker, a pediatrician for over 30 years and creator of the podcast “Parenting Great Kids,” told Fox News Digital this week, “Making children wear masks to prevent catching or spreading COVID at this time is cruel. We know that children do not get very sick if they do get COVID. Otherwise-healthy kids don’t die from COVID. Also, do masks keep them safe? The evidence would say that the masks kids wear do not.”

She continued, “Can using masks harm children? In my experience as a pediatrician, yes! Children feel frightened and isolated (they can’t see a friend’s face) — and masks constantly signal that something is terribly wrong. It’s high time,” she added, “that we leave kids alone and let them get back to life as usual.”

NJ MOM, FORCED INTO VAXXING BEFORE FAMILY WEDDING, WINDS UP IN ER

Parents in many states with mask mandates have been speaking out increasingly about the enforced masking of their children during school hours and in other venues and situations.

The mom in New Jersey told Fox News Digital, “You have to pick your battles. There have been a lot of things [during COVID] that I haven’t liked … My son was born at 30 weeks,” she added. “He was a preemie, so to me this is even more of an issue.”

GET THE FOX NEWS APP HERE

She added, “He had to have a respirator when he was born. So I’m a little bit more concerned because of that — because of his health background. I don’t think he should have a mask on. I’m not very happy about him having to wear a mask for any long period of time. This is partly why I feel so strongly about this.”