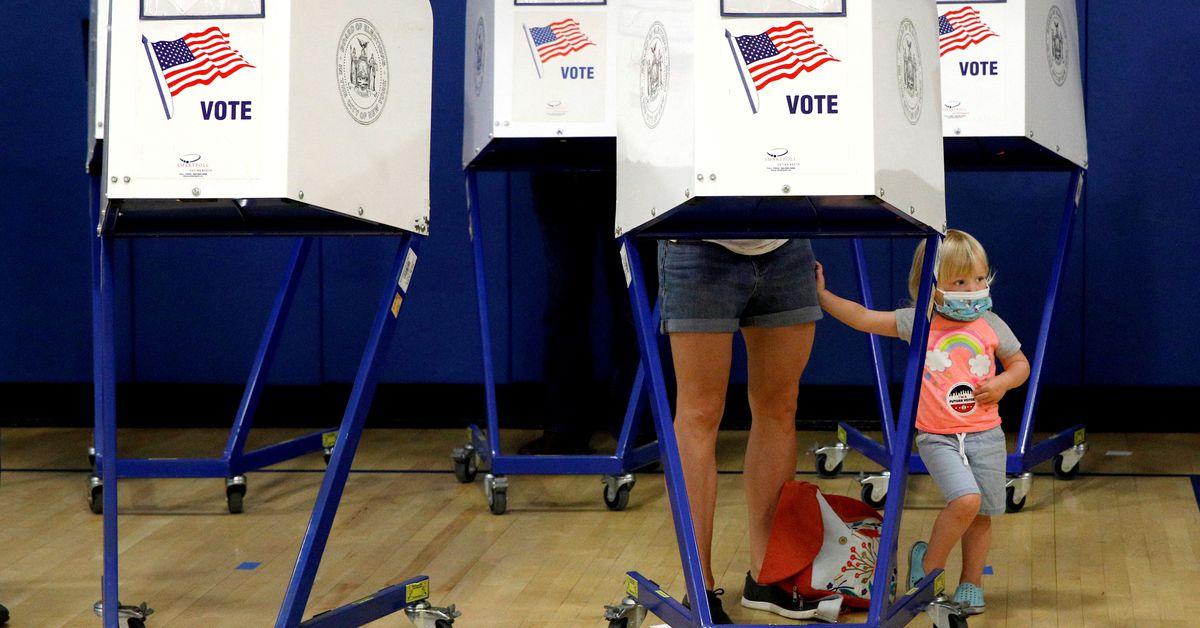 People fill out ballots during voting in the New York primary election at a polling site in the Brooklyn borough of New York City, New York, US, June 22, 2021. REUTERS/Brendan McDermid

Justice Patrick McAllister, a judge in rural Steuben County, signed off on the map just before midnight on Friday, weeks after New York’s top court ruled that the redistricting plan passed by the Democratic-controlled legislature was unconstitutionally manipulated to benefit the party.

The Democratic map would likely have given the party control of 22 of the state’s 26 congressional seats this fall, serving to counterbalance similarly partisan maps passed in Republican-dominated states such as Florida, Georgia and Texas.

Republicans need to flip only five seats in November to win a majority in the House, which would enable them to block much of President Joe Biden’s agenda.

The court-appointed special master who drew the new map, Jonathan Cervas, said in a court filing that his plan creates eight competitive districts, along with 15 Democratic-leaning seats and three Republican-leaning seats.

The map merged the Manhattan districts of Jerrold Nadler and Carolyn Maloney, who have each served in the House for 30 years and now appear headed for what will be an expensive and high-profile August primary battle.

In Westchester County, north of New York, the homes of two Black Democratic first-term congressmen, Mondaire Jones and Jamaal Bowman, were drawn into the same district.

Meanwhile, Sean Patrick Maloney, the chair of the Democratic Party’s national congressional campaign arm, said this week he would run in a new district that included most of Jones’ current seat, angering many of Jones’ allies who said he would be forced into running against either Maloney or Bowman.

But Jones said early on Saturday he would instead run in the new 10th district that includes parts of Brooklyn and Manhattan. Bill de Blasio, the former New York City mayor, has already announced his intention to run for the district, which is expected to draw a crowded field of candidates. read more

The new map represents a bitterly disappointing outcome for Democrats, who used their legislative majorities to push through an aggressive gerrymander. But after Republicans sued, the courts ruled that the Democratic map ran afoul of a 2014 constitutional amendment aimed at removing partisanship from redistricting.

Cervas said he had reviewed thousands of comments since the release of a draft version on Monday and made some changes, including reuniting several Black communities and Asian American communities in New York City that he had originally split.