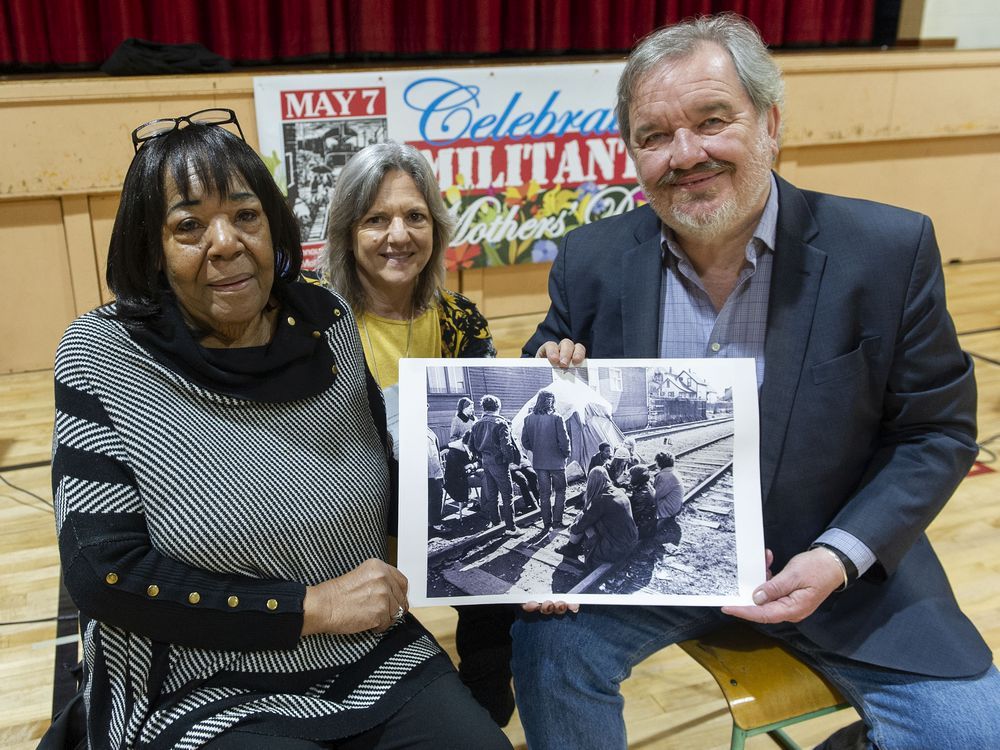 Barbara Burnet has a good memory of the first time she stood on the railway tracks and forced a train to stop.

“That was scary, that was really very scary,” said Burnet, 79.

“We just sort of locked hands and stood there, daring them (to run us over) to make them stop. It was really frightening. Here’s this multi-ton thing coming at you: ‘Are they really going to stop?’

“But we took a deep breath and hung in there, and they did, thank goodness. But it was pretty scary.”

The date was Jan. 7, 1971. Burnet was one of about 25 mothers from the Raymur Place social housing complex in Strathcona who were scared their kids were going to get hurt or even killed by the trains while crossing the tracks on East Pender Street on their way to Seymour school.

They would stage more blockades before the authorities gave in and built an overpass over the tracks. Their courage and tenacity have made them into a legend among local social and political activists, the Militant Mothers of Raymur.

Saturday from 11 am to 2 pm, there will be a community celebration marking the 50th anniversary of the Militant Mothers at the foot of the overpass at 600 Raymur Ave. It was supposed to be held last year, but was delayed due to COVID.

There will be cake, music and a proclamation from city councilor Jean Swanson officially declaring May 7 “Militant Mothers of Raymur Day.”

Back in 1971, though, Burnet didn’t feel like a militant. She was simply a single mother of three, “just looking out for my kids.”

“You started seeing the trains coming when the kids were going to school, and stopping there (blocking the street),” said Burnet.

Shane Simpson, who would later become an NDP cabinet minister, lived in Raymur with his mother and sister at the time.

“In the mornings and in the afternoon the trains would sit on the tracks, waiting to be called into the port,” explains Simpson, 67. “And so they could sit there for an hour. So kids would come, and if you were going (to school) and the train was sitting there, your option was to go under or between the cars. Mostly you’d jump between the cars.”

Burnet likes it to a game of chicken among the kids.

“How long can we get across before the train starts?” she said. “I had a boy who was a little bit more adventurous than the girl, and the boys would do that.”

The issue had been raised when Raymur Place opened in July, 1967. But after years of fruitless negotiations with the City of Vancouver and the Great Northern and Canadian National railways, the mothers decided to blockade the track on Pender Street, between Raymur Ave. and Glen Drive.

After the first blockade, the city promised to build an overpass. But it took awhile to get going, as governments and the railways dickered over who was going to pay for it.

So the mothers staged their biggest blockade on March 24, 1971, setting up a tent and taking over the tracks overnight. It worked – the overpass was soon completed.

Burnet, Simpson and another former Raymur Place resident, Wendy Kyer, spoke at Seymour School about the Militant Mothers on Wednesday morning. About 100 kids in the gym seemed quite intrigued by the story – almost all of them use the overpass to cross the tracks to go to school.

Burnet’s activism didn’t stop with the overpass. Together with her fellow mothers she successfully lobbied for a co-op food store and for Ray-Cam community center at Raymur Place.

“Personally it gave me a really good sense of power, I guess you could say,” she said. “It made me feel like I could do things. I ended up going off and working for the government for 30 years.”

“It probably was the foundational thing for me, that opened my eyes to social activism and social justice things,” said Simpson. “And probably was one of the biggest influences on the decisions I made about how my life went and my career developed.”

Sadly. only a couple of the Militant Mothers will be at the ceremony.

“Most of the mothers have passed on,” said Burnet. “There’s about four of us that are living now, or five maybe. Some people live on the Island.”