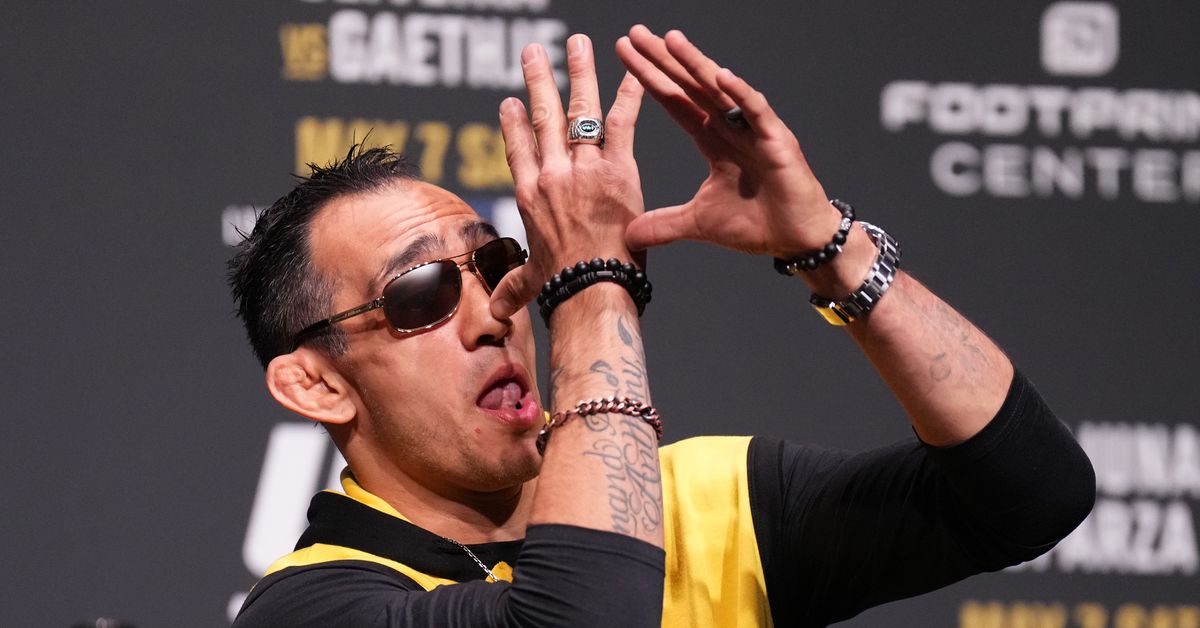 Conor McGregor has beefed with most top Lightweights at one point or another. However, McGregor seems to have a particularly personal dislike of Tony Ferguson, who’s scheduled to compete this weekend (Sat. May 7, 2022) at UFC 274 opposite Michael Chandler. Besides their status as potential foes inside the Octagon, it all seems to stem from Ferguson leaving Paradigm Sports, the company which manages McGregor.

At any rate, McGregor is unimpressed by Ferguson’s recent rant at the UFC 274 media day, in which Ferguson lambasted the UFC and Dana White as “drug dealers” and advised other fighters to be cautious in negotiations. McGregor believes the issue with Ferguson himself, not the UFC, and he said as much in a since deleted tweet.

“Tony Ferguson, who changes representation around 4 times a year, is saying it’s someone else’s fault he is in the position he is in,” McGregor wrote (via MMAFighting). “How many bridges do you burn before you look yourself in the mirror and say ‘maybe it’s me that’s the issue’ God bless you pal, I’ll say a prayer.”

Unless he’s truly dead set on his potential Welterweight plans, McGregor would be wise to keep an eye on UFC 274. By virtue of his stardom, he could find himself in the title mix vs. Charles Oliveira or Justin Gaethje at any time, and the victor of Chandler vs. Ferguson would be a very reasonable match up for his return from injury.

It remains to be seen how the 155-pound division shakes out after this weekend.

CHAMPIONSHIP DOUBLE DIP! Ultimate Fighting Championship (UFC) returns to Phoenix, Ariz., on Sat., May 7, 2022, with a blockbuster championship doubleheader. Headlining the pay-per-view (PPV) event will be Lightweight champion, charles oliveira, seeking to defend his title against No. 1-ranked contender, Justin Gaethje. In UFC 274’s co-main event, women’s Strawweight champion, Rose Namajunas, looks to avenge her loss against No. 2-seeded, Carla Esparza. And top-ranked Lightweight contenders collide when Michael Chandler (No. 5) locks horns with Tony Ferguson (No. 7) in a fan-friendly 155-pound clash for the ages.

So, here’s the update: I still have no opponent for May 28. I told my management let’s set a deadline at the end of the week to find out one way or another. Worst case, all names will carry over to the banner when I do finally get booked, which would most likely be in the fall after my June wedding…

As with all my pro fights, I raise funds to cover camp costs/actually make a profit via the fight banner. $5 or more gets your name/screen name/nickname on the fight banner, and it enters you into a raffle to win the banner itself. Payment options include venmo: AndyLRichardson (1572), PayPalor the latest GoFundMe page. Complete details are HERE!

I hugely appreciate the MMMAmania community support (financial or otherwise) for both my writing and fighting careers. Thank you!

Two-time PFL champ Ray Cooper III missed weight but 5.4 pounds today. He was deducted 1 point and can’t earn any points if he wins.

Also, Magomed Magomedkerimov, the 2018 PFL Welterweight World Champion, was forced out of his matchup with Joao Zeferino due to visa issues.

UFC is targeting Mateusz Gamrot vs. Arman Tsarukyan, which is an absolutely incredible fight!

One more potential fight booking with potential to be an instant classic!

Zhang Weili working reaction time and turning over the hip, a key detail in power-punching.

Apologies to the purists, but freak show fights will never, ever stop being entertaining.

Stay out of this goalie’s space or suffer the consequences.