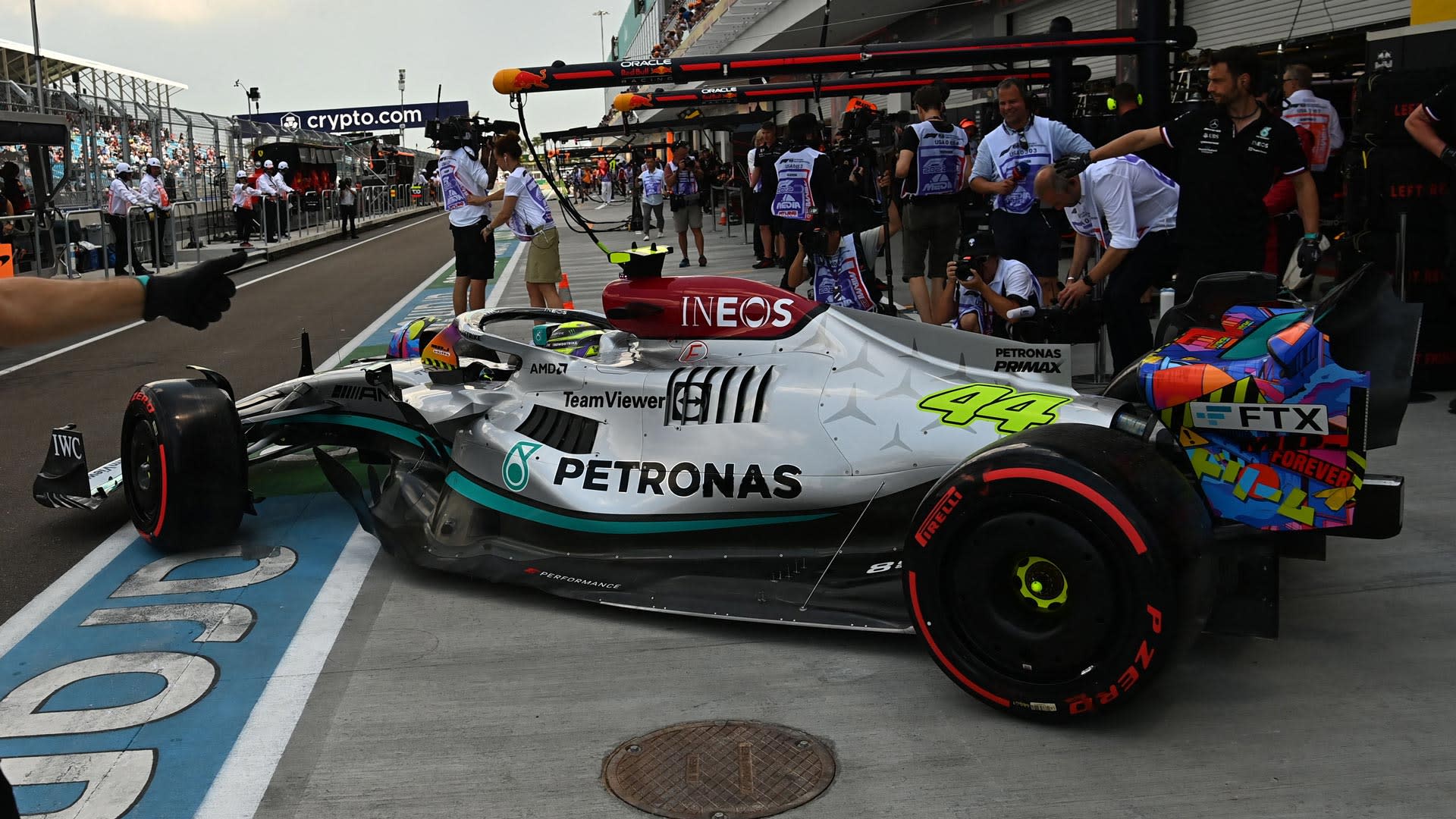 Mercedes have brought a raft of upgrades to the inaugural Miami Grand Prix, which George Russell and Lewis Hamilton are hoping will help improve their fortunes after a difficult start to the 2022 campaign.

The reigning world champions have failed to contend for race victories in any of the opening four races of the season, with the W13 suffering from porpoising more than most of its rivals – with Mercedes a disappointing third in the constructors’ championship.

But after conducting significant work in the windtunnel and CFD, the team have brought a new low drag rear wing, revised front wing and new beam wing – a trio of parts that have been in the works for weeks – to Miami.

“For sure we’ve got a few things to try this weekend,” said Russell. “I don’t think it will be the silver bullet but it’s definitely going to give us a much better indication of the direction we need to take in future events.

“I think these past couple of weeks and months since day one really have been vital to understanding the problem and developing the tools to be able to find solutions. I think we’re finally getting to a point where we feel confident that in race to come, we might be able to solve it. But we’ll have to wait and see.”

Hamilton, who trails Russell by 21 points in the drivers’ standings, added: “You can expect that we’ll be giving it our all and trying our best. There’s been a huge amount of work going on in the background, everyone working as hard as they can.

READ MORE: Why Miami’s staggering build-up has whetted the drivers’ appetites ahead of its first ever Grand Prix

“You can see we’ve got a new rear wing for example so I’m just grateful for everyone continuing to keep their heads down and the amazing hard work that everyone’s putting in.”

Does Hamilton reckon the changes should bring the team closer to pace-setters Ferrari and Red Bull? “I don’t anticipate much change in that sense,” he said.

Hamilton was in New York ahead of traveling to Miami, where he played golf with NFL legend Tom Brady as part of a charity event. On seeing the impressive facility built around the Hard Rock Stadium, which includes a pretend marina and a temporary beach with views of the track, Hamilton liked it to NFL’s showpiece event: the Super Bowl.

GALLERY: Meeting legends, courtside tickets and baseball – here’s what the drivers have been getting up to in Miami

“It definitely is what I expected from Miami,” added Hamilton. “Already going through the city, just seeing events everywhere and the buzz. I was just in New York and I remember walking through the streets and I heard someone talking about [the race] and they didn’t know I was there.

“But there’s just talk on the streets. I’ve been to a couple of Super Bowls and this feels like a similar vibe. What a great place for us to have it – and around this incredible stadium.

“I think it’s going to be an amazing spectacle, and also really cool for people across in Europe and around the rest of the world to see just how great Miami is.”