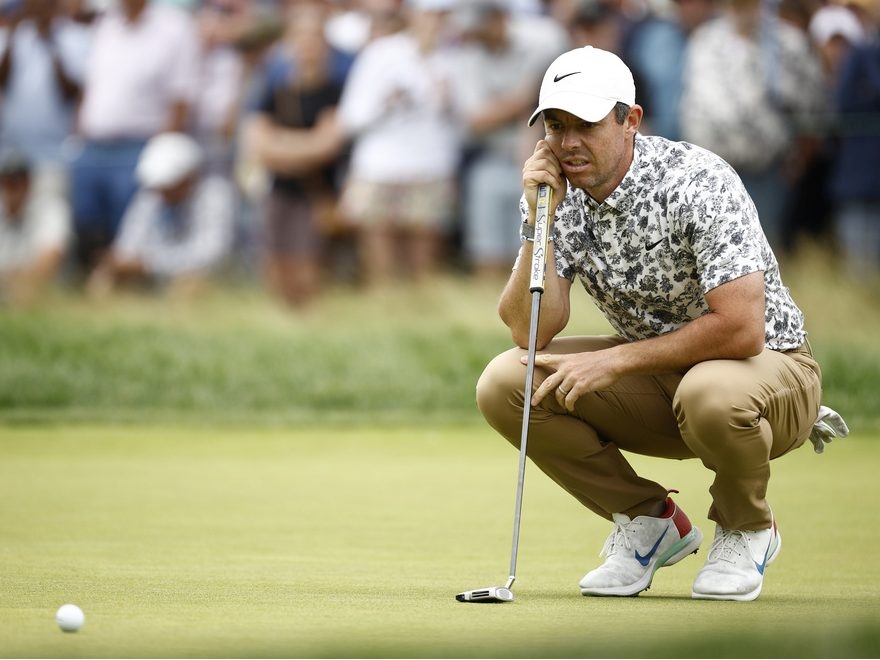 BROOKLINE, Mass. — The next big step for Rory McIlroy began on Thursday at the US Open.

For the second major championship in a row, the Northern Irish star flipped the script on years of slow starts at golf’s biggest tournaments. On Thursday morning at The Country Club at Brookline, McIlroy shot a three-under par 67, sending a strong message that he will be a force to reckon with this week.

“I just basically did everything that you need to do at a US Open,” McIlroy said after his round. “Overall, really pleased about the start. That’s now two majors in a row that I’ve started well, and hopefully just keep going from here.”

Last week in Canada, McIlroy added a new chapter to his place in golf history. Not by winning the RBC Canadian Open, something he’s done twice in a row, but by leaving absolutely no doubt that he is the face of the PGA Tour in the fight for the future of professional golf. Nobody has been clearer where they stand on the Saudi-funded LIV Golf series and its front-man Greg Norman than McIlroy. He has attacked the renegade rival tour from both a moral and competitive standpoint, even expressing his opinion that players choosing to play there are either washed up or simply interested in “taking the easy way out.”

Not everyone agrees with McIlroy, and some find it all a little sanctimonious coming from one of the richest athletes in all of sports. The golfer himself admitted it was perhaps petty to take such joy in passing Norman in PGA Tour wins last week at St. George’s in Toronto.

After his round Thursday, McIlroy said that he isn’t looking to be put on a pedestal, or to become, as one writer described him, the conscious of the sport.

“I’m just being me, I’m living my life,” McIlroy said. “I’m doing what I think is right and trying to play the best golf that I possibly can. I wasn’t asked to be put here. I wasn’t trying to be in this position.”

Regardless of how you feel about McIlroy, if the PGA Tour is able to fend off this existential threat to its dominance, there could be a strong argument made for a Prince of Ponte Vedra statue honoring the golfer to be built outside PGA Tour headquarters in Florida .

Before we get too far ahead of ourselves though, there is one significant thing holding back the wee lad from Holywood, Northern Ireland, from assuming his place in bronze. It’s something he can work on this week at Brookline.

There’s a massive difference between being a great golfer and being one of golf’s greats. Greg Norman was a great golfer. How’s that for motivation, Rory?

McIlroy has been stuck at four major championship wins since 2014. You only have to watch him hit one drive to know that’s too long. There are very few things in golf as impressive as Rory McIlroy in full-flight. We saw it last Sunday in Toronto. We saw it three years ago in Hamilton.

On Thursday at The Country Club, McIlroy slammed his club in anger into the face of the bunker on the par-4 fifth hole after drawing a bad lie. On the ninth, his final hole of the day, he threw his iron in frustration after a poor approach set up his only bogey of the round.

He blamed the outbursts on this championship, and everything the US Open demands from players.

“I was sort of cursing the USGA whenever I was going up to the ball, and then yeah, but it’s one of those things it happens here, it doesn’t really happen anywhere else,” he said.

After his round, he said that recent events in the golf world have not given him any extra motivation.

“Not really,” he said. “It’s been eight years since I won a major, and I just want to get my hands on one again.”

But watching McIlroy over the past two weeks, it’s impossible not to see a man with renewed purpose. Golf’s renaissance man seems no longer interested in talking to us about what wine he’s drinking or what books he’s reading.

Speaking of stories, there was once a golfer from Australia named The Shark. He was the most beautiful driver of the golf ball in the world, but he could never quite live up to his potential.

Pretty sure McIlroy knows that story, and it’s one he seems, more than ever, determined not to repeat.