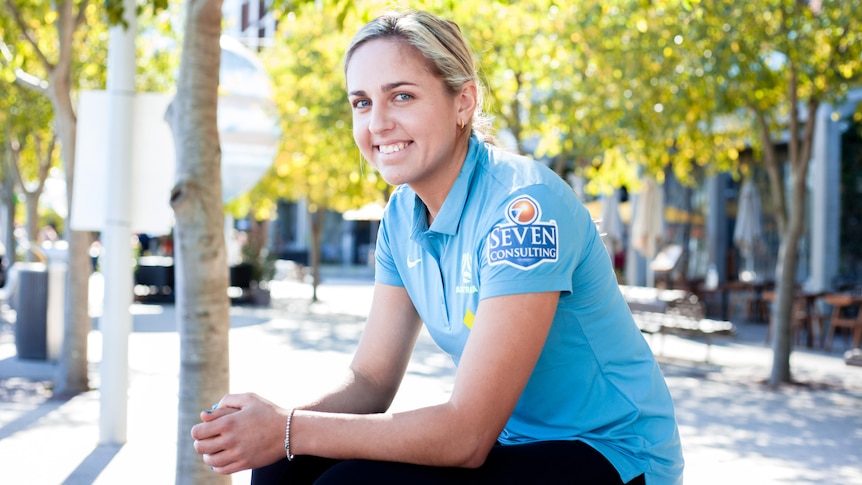 Mackenzie Hawkesby dreamed of playing for the Matildas as a little girl while growing up in Figtree in Wollongong, and this week she received that call-up to the national women’s squad.

“This is about the proudest moment you can have as a person,” she said.

“It’s something that you wait for and want as a footballer, but to get the actual call was really surreal.

“When the squad was announced there was a lot of emotions. It’s been a whirlwind couple of days and I’m really thankful.”

After an outstanding A-League Women’s season, the 22-year-old Sydney FC midfielder helped secure Sydney a grand final birth, scoring five goals in the season including a hat trick against the Wellington Phoenix.

Described as The Sky Blues’ playmaker, Hawkesby was named the squad’s Player of the Year.

“[I] had a great season with Sydney and [was] very happy with how the team went and my overall performance in that,” she said.

“I was able to show a bit more of the player I am like and I am hoping that I can transition into the national squad.”

The former Illawarra Stingray is one of the fresh faces Matildas head coach Tony Gustavsson has called up as part of the 24-player squad to take on Spain and Portugal in the June FIFA International Window.

Hawkesby will be joined by five of her Sydney FC teammates as some of the senior members of the national squad including Sam Kerr, Caitlin Foord, Hayley Raso, and Alanna Kennedy are given a rest.

The roster still includes a lot of experience with Clare Polkinghorne, Emily Van Egmond, Katrina Gorry, and Emily Gielnik, with the Matilda’s longest-serving goalkeeper Lydia Williams expected to notch up her 100th cap in the friendlies.

She will fly to Europe on Sunday to join the camp in preparation for the friendlies against Spain, ranked 7th in the world, and Portugal.

“I think Spain are one of the top teams in the world, a lot of the girls there have played for Barcelona so I think it is going to be a really good test and challenge for us to see what we are like,” she said .

She is hoping her first call up to play for the Matildas is a chance to stake her claim for 2023 World Cup selection.

“I know what the Matildas DNA is all about, it’s about that never-say-die attitude,” Hawkesby said.

The Matildas will face the two Euros-bound nations on Sunday, June 26, and Wednesday, June 29, with coverage live and free on Network Ten and Paramount+.