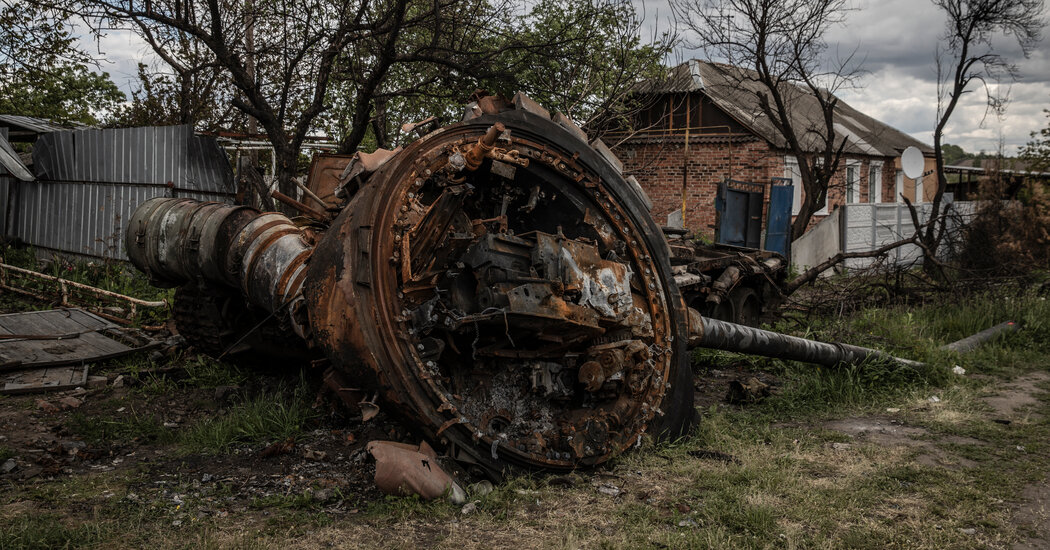 Army vehicles were so decrepit that repair crews were stationed roughly every 15 miles. Some officers were so out of shape that the military budgeted $1.5 million to re-size standard uniforms.

That was the Russian military more than a decade ago when the country invaded Georgia, according to the defense minister at the time. The shortcomings, big and small, were glaring enough that the Kremlin announced a complete overhaul of the military to build a leaner, more flexible, professional force.

But now, almost three months into Russia’s invasion of Ukraine, it is clear the Kremlin fell woefully short of creating an effective fighting machine. Russian forces in Ukraine have underperformed to a degree that has surprised most Western analysts, raising the prospect that President Vladimir V. Putin’s military operation could end in failure.

By any measure, despite capturing territory in the south and east, the Russian military has suffered a major blow in Ukraine. It has been forced to abandon what it expected would be a blitzkrieg to seize the entire country in a few days. Its forces were driven from around Kyiv, the capital. The flagship of its Black Sea fleet, the Moskva, was sunk; it has never controlled the skies; and by some Western estimates, tens of thousands of Russians have died.

This war has exposed the fact that, to Russia’s detriment, much of the military culture and learned behavior of the Soviet era endures: inflexibility in command structure, corruption in military spending, and concealing casualty figures and repeating the mantra that everything is going according to plan.

The signs of trouble were hiding in plain sight. Just last summer, Russia held war games that the Ministry of Defense said showed its ability to coordinate a deployment of 200,000 men from different branches of the military in a mock effort to combat NATO. They would be among the largest military exercises ever, it said.

The whole exercise was scripted. There was no opposing force; the main units involved had practiced their choreography for months; and each exercise started and stopped at a fixed time. The number of troops participating was probably half the number advertised, military analysts said.

“It is the Soviet army, basically,” said Kamil Galeev, an independent Russian analyst and former fellow at The Wilson Center in Washington. “The reforms increased the efficiency of the army, but they only went halfway.”

When, after the Georgia conflict in 2008, Russia tried to revamp its military, the idea was to jettison the rigidly centralized, Soviet-era army that could supposedly muster four million troops in no time. Instead, field officers would get more responsibility, units would learn to synchronize their skills and the entire arsenal would be dragged into the computer age.

Many traditionalists resisted change, preferring the old model of a huge, concentrated force. But other factors also contributed to the military’s inability to transform. Birthrates plunged in the 1990s, leading to a shrinking pool of men that could be conscripted. That, and persistent low salaries, delayed recruitment targets. Endemic corruption handicapped the efforts.

But the basic problem was that the military culture of the Soviet Union endured, despite the lack of men and means to sustain it, analysts said.

“The Soviet military was built to generate millions of men to fill lots and lots of divisions that had endless stockpiles of equipment,” said Michael Kofman, the director of Russia studies at CNA, a research institute in Arlington, Va. “It was designed for World War III, the war with NATO that never came.”

Ultimately, the push for change stalled, leaving a hybrid version of the military somewhere between mass mobilization and a more flexible force, analysts said. It still favors substantial artillery over infantry troops who can take and hold land.

The scripted way the military practices warfare, on display in last summer’s exercises, is telling. “Nobody is being tested on their ability to think on the battlefield,” said William Alberque, the Berlin-based director of the arms control program at the International Institute for Strategic Studies. Instead, officers are assessed on their ability to follow instructions, he said.

Russia would like the world to view its army as it appears during the annual Victory Day parade — a well-oiled instrument of fit soldiers in dashing uniforms marching in unison and bristling with threatening weapons.

“They use the military forces as a propaganda machine,” said Gleb Irisov, 31, a former air force lieutenant who left the military in 2020 after five years. He then worked as a military analyst for the official TASS news agency before quitting and leaving the country because he strongly opposed the invasion.

Russian troops faced no real adversary in Syria; the war was mostly an air force operation where the pilots could hover over targets at will. Russia has not fought a large land war since World War II.

Yet Russia’s leaders exaggerated the country’s success. In 2017, Sergei K. Shoigu, Russia’s defense minister, bragged at a meeting of fellow ministers in the Philippines that Russia had “liberated” 503,223 square kilometers in Syria. The problem is that the area Mr. Shoigu claimed to have freed from militants is more than twice the size of the entire country, reported Proekt, an independent news outlet.

With about 900,000 people overall, a little over one third of them ground forces, the Russian military is not that large, considering that it must defend a vast country covering 11 time zones, analysts said. But the goal of recruiting 50,000 contract soldiers every year, first stated a decade ago, has not been met, so there is still a yearly draft of 18- to 27-year-olds.

Mr. Putin has not resorted to a mass military draft that would muster all able-bodied adult males for the war. But even if he did, the infrastructure required to train civilians en masse no longer exists. The consensus is that the bulk of Russia’s available ground forces have already been deployed in Ukraine.

Rampant corruption has drained resources. “Each person steals as much of the allocated funds as is appropriate for their rank,” said retired Maj. Gen. Harri Ohra-Aho, the former Chief of Intelligence in Finland and still a Ministry of Defense adviser.

The corruption is so widespread that some cases inevitably land in court.

In January, Col. Evgeny Pustovoy, the former head of the procurement department for armored vehicles, was accused of helping to steal more than $13 million by faking contracts for batteries from 2018 to 2020, according to TASS.

In February, a Moscow military court stripped Maj. Gen. Alexander Ogloblin of his rank of him and sentenced him to 4.5 years in prison for what the charges called fraud on an “especially large scale.” The authorities accused him of embezzling about $25 million by vastly overstating the expenses in state contracts for satellite and other equipment, the business news website BFM.RU reported.

Huge contracts are not the only temptation. The combination of low salaries — a senior officer earns roughly $1,000 per month — and swelling budgets is a recipe for all sorts of theft, analysts said, leading to a chain reaction of problems.

Commanders disguise how few exercises they hold, pocketing the resources budgeted for them, said Mr. Irisov, the analyst. That exacerbates a lack of basic military skills like navigation and shooting, although the air force did maintain flight safety standards.

“It is impossible to imagine the scale of lies inside the military,” Mr. Irisov said. “The quality of military production is very low because of the race to steal money.”

One out of every five rubles spent on the armed forces was stolen, the chief military prosecutor, Sergey Fridinsky, told Rossiyskaya Gazeta, the official government newspaper, in 2011.

In general, Russian weaponry lags behind its computerized Western counterparts, but it is serviceable, military analysts said. Still, some new production has been limited.

For example, the T-14 Armata, a “next generation” battle tank unveiled in 2015, has not been deployed in Ukraine because there are so few, they said.

Russia has poured hundreds of billions of dollars into its military, producing under the State Armament Program a stream of new airplanes, tanks, helicopters and other material. Military spending has not dipped below 3.5 percent of gross domestic product for much of the past decade, according to figures from the International Institute for Strategic Studies, at a time when most European nations struggled to invest 2 percent of GDP And that is only the public portion of Russia’s military budget.

This kind of financial investment has helped Russia make what gains it has in Ukraine.

Johan Norberg, a Russia analyst at the Swedish Defense Research Agency, said Russia and its military are too sprawling to expect them to fix every problem, even in a decade. The war in Ukraine exposed the fact that the Russian military is “not 10 feet tall, but they are not two feet tall, either,” he said.