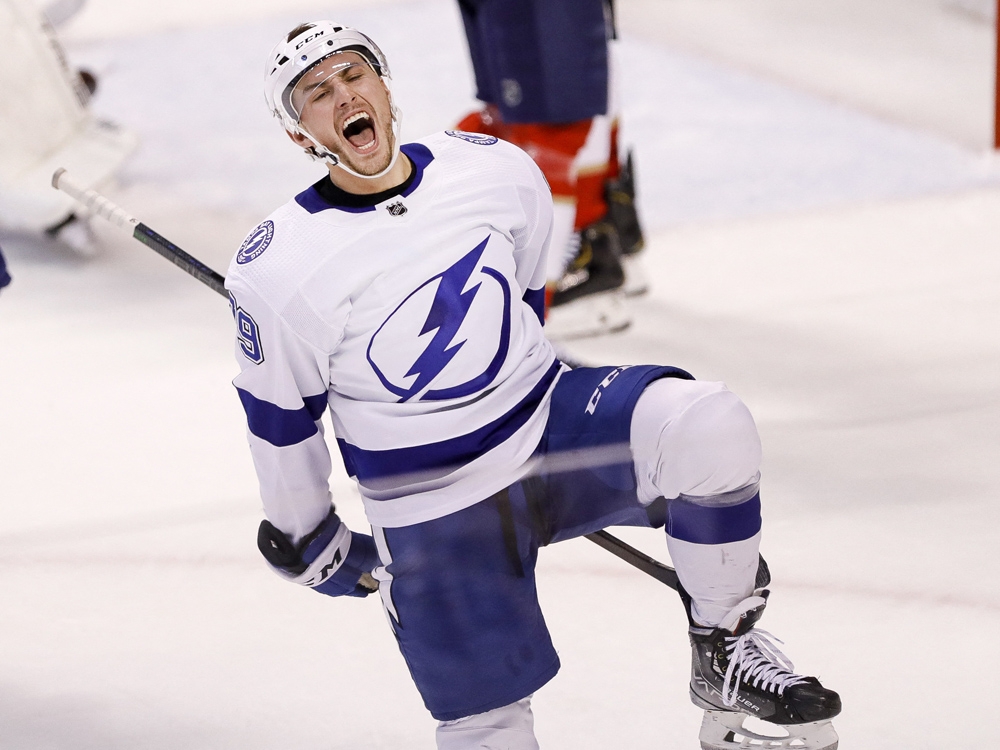 Pierre-Edouard Bellemare scored the go-ahead goal with 16:25 left to play as the Tampa Bay Lightning rallied to defeat the host Florida Panthers 4-1 on Tuesday night in the opener of their Eastern Conference semifinal playoff series in Sunrise, Fla.

Tampa Bay’s power play went 3-for-6, while the Panthers — who led the NHL in goals scored this season — went 0-for-3 on their power play. They are now 0-for-21 on the power play in the playoffs.

Corey Perry and Nikita Kucherov each had one goal and one assist for Tampa Bay, and Andrei Vasilevskiy made 32 saves. Ross Colton had the final goal.

The Panthers got 32 saves Sergei Bobrovsky and a goal from Anthony Duclair off a sizzling assist from Jonathan Huberdeau.

Game 2 of the best-of-seven series is set for Thursday night, also in Sunrise. The Lightning are the two-time reigning Stanley Cup champions, while Florida had the best record in the league in the regular season.

Duclair had a would-be game-tying second goal disallowed with 8:09 left in the game. The puck hit the back netting and should’ve been ruled a stoppage. The officials missed it, but Tampa Bay challenged the non-call and had the goal disallowed.

Florida opened the scoring with 14:01 expired in the first period. Huberdeau held onto the puck at the back end of the right circle until finally finding Duclair for the easy goal at the doorstep.

Kucherov took over with two great plays in the final four minutes of the second period. First, he drew a hooking penalty on Panthers defenseman MacKenzie Weegar, using a burst of speed to accelerate to his right.

During the ensuing power play, Kucherov put on a breathtaking move on Panthers defenseman Aaron Ekblad, skating right, then left. Kucherov dished to Perry, who tapped in the puck to the open right side of the net, making the score 1-1 with 3:38 remaining.

The Lightning took a 2-1 lead on Bellemare’s goal. The sequence started when Bobrovsky stopped Perry’s shot. Bellemare picked up the loose puck and whipped it over Bobrovsky’s left shoulder.

Kucherov’s goal with 4:06 left gave Tampa Bay a 3-1 lead. Florida challenged the goal due to what the Panthers felt was goalie interference. It appeared that Tampa Bay’s Anthony Cirelli — who was setting a screen — hit Bobrovsky’s head.

But the officials ruled it a good goal, and the Panthers were assessed a penalty for the failed challenge, leading to Colton’s rebound goal with 2:16 left.