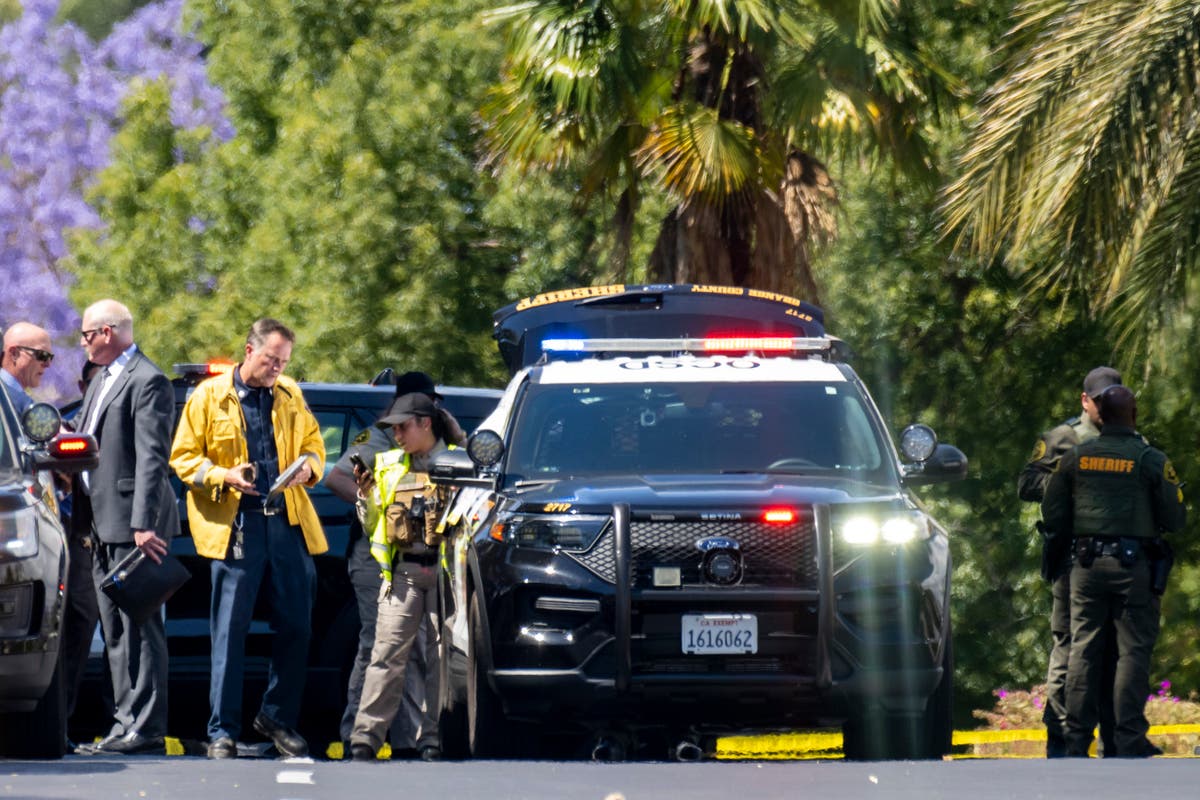 One person is dead, four others are “critically” wounded and another person has “minor” injuries after a gunman opened fire inside a church in southern California on Sunday afternoon.

Emergency dispatchers received a call of a shooting inside Geneva Presbyterian Church in Laguna Woods at 1:26pm PT on May 15, according to the Orange County Sheriff’s Office.

All victims are adults and have been admitted to area hospitals.

A suspect, described by police as an Asian man in his 60s, was detained at the scene and two handguns have been recovered.

About 30 to 40 people, many of them Taiwanese, were inside the church during the shooting, police said.

A statement from the office of Governor Gavin Newsom said officials “no one should have to fear going to their place of worship. Our thoughts are with the victims, community, and all those impacted by this tragic event.”

The shooting comes one day after a gunman killed 10 people in a grocery store in an apparent racist attack in Buffalo, New York, among the deadliest mass shootings in 2022.

Federal agents from the FBI and ATF have joined Orange County police as they investigate a shooting a church in Southern California that left one dead and five injured.

The ATF said on Sunday it has put an “emergency” trace on the two handguns recovered at the scene, which were commercially made and bore serial numbers.

A gunman who opened fire in a Southern California church on Sunday was “hogtied” with an extension cord by parishioners after he killed one person and injured five more, according to police.

“Had people not intervened, it could’ve been much worse,” Orange County Undersheriff Jeff Hallock said at a press conference on Sunday. “There were 30 to 40 people in the church.”

Josh Marcus have the latest updates on the tragic shooting.

Parioshners hogtied a gunman with an extension cord after he killed one person and injured five more at a Southern California church on Sunday, according to Orange County Undersheriff Jeff Hallock.

“They undoubtedly prevented additional injuries and fatalities,” Mr Hallock said at a press conference on Sunday.

Police arriving at the scene found the man tied up and stripped of at least two weapons.

The suspect, whose motive and place of origin is unknown, is an Asian man in his 60s, according to police.

Police say it’s unclear whether the attack was a hate incident like Saturday’s mass shooting in Buffalo, or whether the man had any ties to the church.

About 30 people were inside Geneva Presbyterian Church on Sunday when a gunman opened fire inside, before being “subdued” by parishioners, according to police.

The individual, who has not been named publicly, is a 68-year-old Asian man originally from Las Vegas, a law enforcement source told Los Angeles Times.

Police are expected to address the pubilc at 5pm PT on Sunday with updates about the shooting at a church in Laguna Woods, California.

Law enforcement: Many people inside church were Taiwanese

Officials with the Orange County Sheriff’s Office told reporters that many of the roughly 30 people inside Geneva Presbyterian Church at the time of the shooting were Taiwanese.

The church hosts services for the Irvine Taiwanese Presbyterian Church.

Most of Laguna Woods is within age-restricted community

Most of the population of Laguna Woods, roughly 50 miles southest of Los Angeles, lives within a large age-restricted community formerly known as Leisure World where at least one member of a household must be age 55 or older.

The city is also about 10 miles from University of California Irvine.

California congresswoman: ‘This is a nationwide epidemic’

California US Rep Katie Porter, who represents a swath of Orange County in Congress, said in the wake of shootings in Laguna Woods and Buffalo, shootings have become “a nationwide epidemic.”

“We need elected officials across the country and at every level of government to step up and lead—not just think and pray,” she said.

In another statement, she said “this should not be our new normal.”

Governor’s office monitoring scene: ‘No one should have to fear going to their place of worship’

A statement from the office of California Governor Gaving Newsom says “no one should have to fear going to their place of worship.”

“Our thoughts are with the victims, community, and all those impacted by this tragic event,” according to the statement.

One dead and four ‘critically’ wounded in attack at church

What we know about the shooting in Orange County so far: