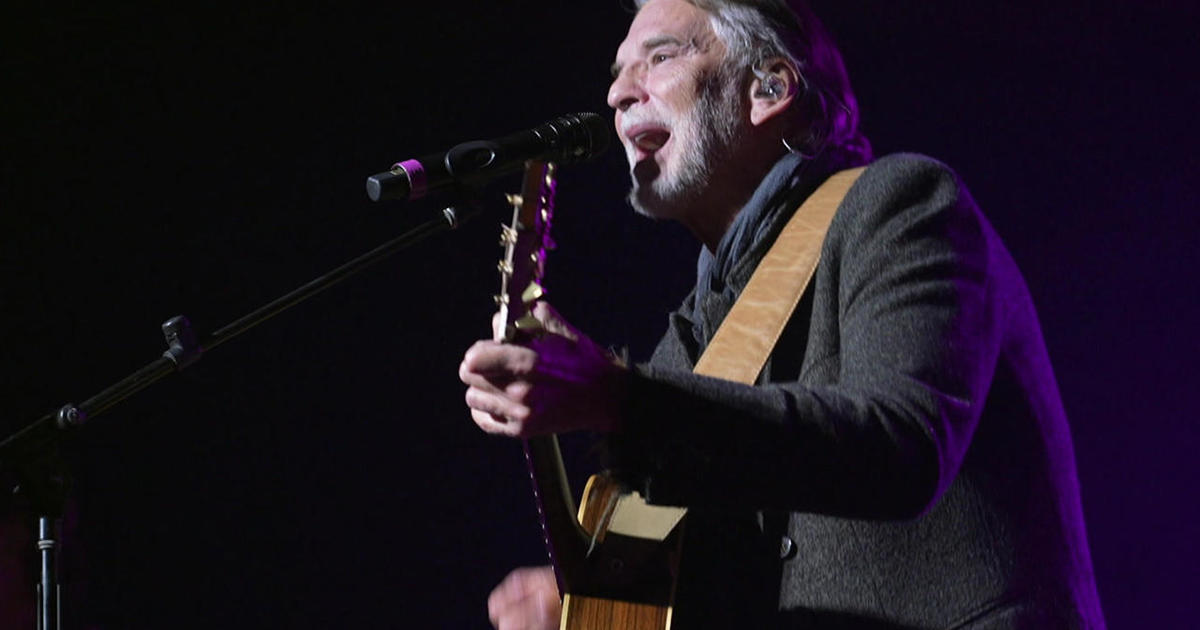 Backstage before a concert in Cincinnati recently, Kenny Loggins was fine tuning just about everything.

Correspondent Lee Cowan asked the two-time Grammy-winner, “Do you like touring, after all these years?”

“Well, yes and no,” Loggins replied. “It’s like making love, right? If you get a good response, you’re better.”

At 74 Loggins himself has come of age nicely. His voice from him sounds as youthful as his songs from him, which have a habit of making us feel pretty young, too. Chances are you know the words to most, if not all, of them; they are a part of pop culture, which is why, more often than not, a Kenny Loggins concert turns into one big sing-along.

Loggins said, “I learned early on that songs that were very personal to me, and that’s anything where I could write where it would really touch my heart or hit that place of vulnerability, would then be more accessible to an audience.”

“‘Cause if it mattered to you, it would matter to a listener?” asked Cowan.

“Exactly. Vulnerability is what I do for a living.”

Loggins came to fame as the other half of Loggins and Messina. Musically, he and Jim Messina seemed made for each other.

To listen to Loggins and Messina perform “Danny’s Song,” click on the player below:

But as Loggins details in a new memoir, “Still Alright,” he knew he eventually needed to stretch his wings by himself.

Cowan asked, “Most people, especially who are in successful duos, very few of them go on to be as successful.” [solo].”

“I was really lucky that no one told me that!” Loggins laughed.

His solo career took off – album after album, video after video. He’s now considered one of the captains of “Yacht Rock,” that tongue-in-cheek label for easy listening music back in the ’70s and ’80s. Whatever they’re called now, those hits gave him the wherewithal to move out of LA and up to Santa Barbara, where he’s been ever since.

There is, however, a price to pay for all this beauty. In 2018, the hills above his home gave way, sending a deadly wall of mud through his neighborhood in Montecito.

I have never thought about leaving, though; this stretch is his own Bedford Falls. “I have a kinda Jimmy Stewart life here, because I’ll go to the store and people who I don’t know, know me. So it’s, ‘Hey, Kenny. How you doin’ today?’ It’s like, ‘How are things at the gas station, Bob?'”

It’s a long way from the celebrity of Loggins’ life. Just this month he was sharing the red carpet with none other than Tom Cruise. Loggins’ throaty voice on the anthem for the “Top Gun” soundtrack became so synonymous with that 1986 film that when Cruise decided to make the sequel, “Top Gun: Maverick” (for Paramount, CBS’ parent company), he said he had to find a place for it.

“He said, ‘It wouldn’t be ‘Top Gun’ without ‘Danger Zone,’ and he meant it,” Loggins said.

“That happens all the time. The best example of that is a song I wrote with Mike McDonald called ‘This Is It,'” he said. “My dad went in the hospital, and it struck me that he was thinking he was prepared to die on the operating table. And I thought, ‘You don’t necessarily have to do that. You know, maybe you can make a decision to not do that.'”

“This Is It” wasn’t a love song, I realized; it was a life song.

He captures those life moments better than most, perhaps best with his ode to Winnie the Pooh. He had written “Pooh Corner” as a boy of only 17, but after spending some time as a dad himself, he re-wrote the end: “That circle comin’ around to where you see your son sleeping with the bear you slept with when you were a kid.”

After all said and done I was watching my son
Sleeping there with my bear by his side
So I tucked him, I kissed him
And as I was going
I swear that old bear
Whispered, “Boy, welcome home”

Kenny Loggins is now at a point where he can celebrate all his success, and at the same time make a promise to himself about the future: “To be more present, so that I can enjoy each moment that I have, because we don’ t know how many more we’ve got. So, you know, savor this one.”