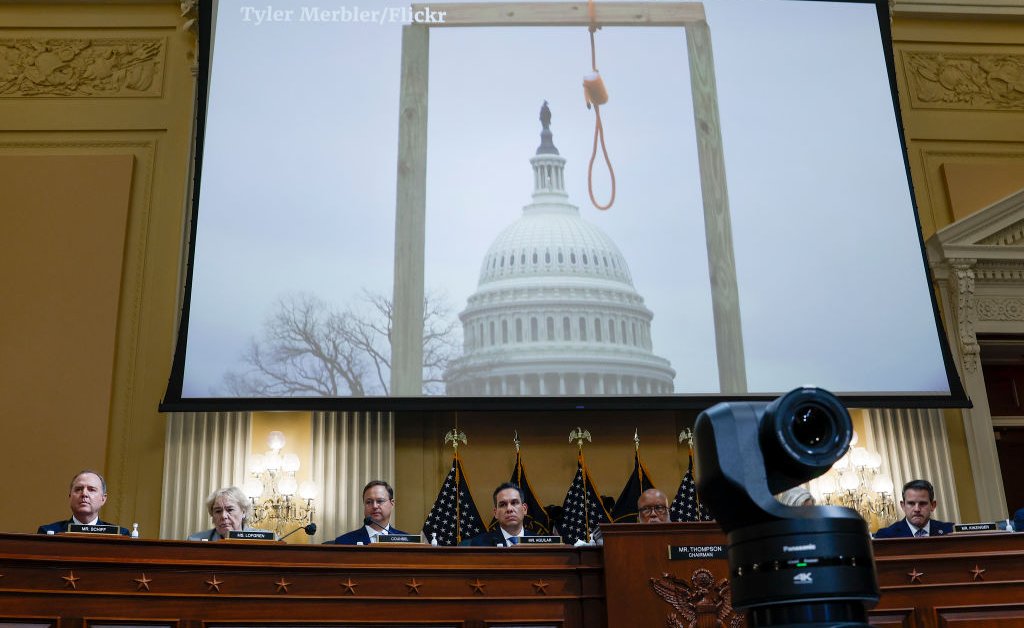 EITHERn the morning of Jan. 6, 2021, Mike Pence was praying with his staff inside the Vice Presidential residence at the Naval Observatory compound in Washington. They knew it was going to be a difficult day, so they asked for wisdom and guidance. That’s when President Trump called.

Trump was berating Pence for continuing to maintain that the Vice President had no legal power to reject the Electoral College votes in Congress later that day, a move that would have handed Trump the election. White House staff and family members around Trump in the Oval Office during his call with Pence described to the Jan. 6 committee how Trump’s tone of him got “heated.” Trump called Pence a “wimp” and “the P-word,” witnesses said, and told Pence he had made the wrong decision picking Pence for Vice President.

Pence came back to the prayer circle looking “steely,” “determined” and “grim,” recalled Pence’s legal counsel Greg Jacob. The day would only get harder for the Vice President.

Throughout Thursday’s hearing of the House Select Committee investigating the attack on the Capitol, witnesses laid out how Trump pressured Pence in public and private to try and overturn the election. That campaign, the committee argued, included Trump recklessly endangering Pence’s life.

Hours before the Capitol attack, Trump riled up his supporters at a rally on the Ellipse near the White House. Officials involved testified to the committee that Trump ad-libbed lines about Pence in the speech, saying “If Mike Pence does the right thing, we win the election,” and “I hope Mike has the courage to do what he has to do and I hope he doesn’t listen to the RINOS and the stupid people that he’s listening to.”

The pressure continued as the day progressed. Witnesses testified that Trump had been told a violent mob had breached the Capitol before he tweeted at 2:24 pm that Pence “didn’t have the courage to do what was necessary.” The committee showed video of Trump supporters on the steps of the Capitol reading Trump’s tweet aloud, their anger growing at the Vice President, who they believed had “betrayed” Trump. The committee then showed video of the crowd chanting “hang Mike Pence” and a noose set up outside the Capitol building.

Based on video evidence of where the mob had penetrated the building, the committee determined that rioters had gotten within 40 feet of Pence as he was evacuating from the Senate chamber to an underground loading dock in the Capitol complex where his motorcade was staged, according to Rep. Pete Aguilar, a California Democrat on the committee.

“Make no mistake about the fact the vice president’s life was in danger,” Aguilar said.

Once Pence reached the underground parking structure, he declined instructions by the Secret Service to load into his motorcade. “The Vice President had refused to get into the car,” Jacob recalled. Pence, Jacob said, “didn’t want to take any chance that the world would see the Vice President fleeing the Capitol.” Pence waited in that underground location for more than two hours while rioters roamed the Capitol building, some of them looking specifically for him. It had been a close call. The committee also showed snippets of an affidavit from an FBI informant who said members of the Proud Boys had intended to kill Pence if they had found him that day.

As he waited for the riot unfolding above him to end, Pence was in contact with the acting secretary of defense. I have also checked on the safety of other officials. But throughout the order, Trump did not contact his Vice President. Pence and his wife, Karen Pence, expressed “frustration” that Trump hadn’t checked on their safety, Jacob said.

Pence stayed in the Capitol Building until the Senate Chamber had been cleared of the mob.

Later that night, Pence summarized the only activity he had the power to do under the Constitution, which was to preside over the congressional counting of the Electoral College tallies as they were sent by the states. At 3:46 am, I have formally declared the presidential election for Biden.

For weeks Pence had been getting legal advice and had determined that the framers of the Constitution, after revolting against the tyranny of King George and creating a government based on the separation of powers, would not have intended for the Vice President to be able to influence the outcome of a presidential election. Marc Short, Pence’s chief of staff, said that was what Pence believed when he met with Trump on Jan. 5, the day before the riot. Yet soon after that meeting, Trump dictated a statement saying Pence believed he had the power to overturn the election results. Short said Trump’s statement was a lie.

The committee showed video testimony of Trump’s aide Jason Miller saying Trump himself dictated the Jan. 5 statement. “I have dictated most of it,” Miller told the committee. “Ultimately the way this came out was the way he wanted it to.” Despite Trump lying about Pence’s view of his role in a public statement, the Vice President did not succumb to the pressure, a decision that multiple committee members praised on Thursday.

“Our system nearly failed and our democratic foundation nearly failed,” Rep. Liz Cheney, Republican of Wyoming and the committee’s vice chair, said during Thursday’s hearing. “Trump’s pressure campaign to stop the electoral count did not end with Vice President Pence—it targeted every tier of federal and state elected officials.”

While waiting in the secure location under the Capitol complex, Pence’s legal counsel Jacobs recalled reading his Bible about Daniel refusing an order from the Babylonian king. “I felt that’s what played out that day,” Jacob said.