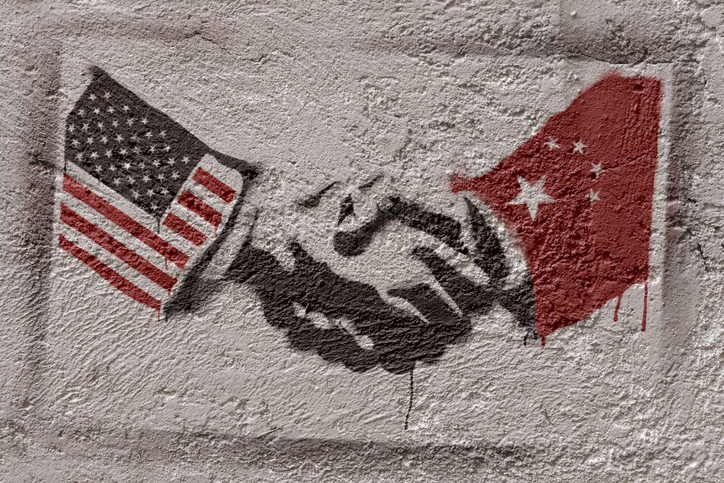 EXPERT PERSPECTIVE — A meeting – albeit virtual – between President Joe Biden and Chinese President Xi Jinping finally happened. It was a cordial and reportedly candid exchange that hopefully cooled some of the tension between the US and China.

President Biden captured the essence of the meeting with his concern that this tension “does not see into conflict, whether intended or unintended.” President Xi said, “China and the US need to increase communications and cooperation” and “respect each other and coexist in peace.”

It’s hard to believe that in 1979, when formal US – China diplomatic relations were established, Chinese President Deng Xiaoping looked to the US as the country that would provide the investment, technology, and unlimited access to our best universities. And the US didn’t disappoint. Investment and sophisticated technology flowed to China, with hundreds of thousands of Chinese students enrolling in our universities. Strategic bilateral cooperation initially contributed to the defeat of the Soviet Union in Afghanistan, with joint efforts to address international terrorism and nuclear proliferation.

So, during the span of forty-two years, relations have gone from close economic and strategic cooperation to a concern about conflict, intended or unintended. Understandably, scholars will spend considerable time analyzing what went wrong.

What is important now is that US-China relations move in a more positive direction. That tension over China’s aggression against Taiwan, the militarization of islands and reefs in the South China Sea, internment camps for Uyghurs in Xinjiang, the national security law in Hong Kong that suppresses democratic protests and the theft of intellectual property all must be candidly discussed by our diplomats and leaders to avoid misunderstanding and accidental conflict.

The three communiques and the Taiwan Relations Act of 1979 specifically states that, inter alia, “the United States decision to establish diplomatic relations with the People’s Republic of China rests upon the expectation that the future of Taiwan will be determined by peaceful means; to consider any effort to determine the future of Taiwan by other than peaceful means, including by boycotts or embargoes, is a threat to the peace and security of the Western Pacific area and of grave concern to the United States.”

The challenge for the US and China is to address Taiwan and a myriad of other irritants in the bilateral relationship to ensure that no one issue, or series of issues leads to conflict. Toning down the rhetoric and pursuing a policy of substantive and sustained communications, especially by our diplomats, would be a necessary first step.

The Cipher Brief hosts private briefings with the world’s most experienced national and global security experts. Become a member today.

The annual Economic and Strategic Dialogue with China, led by the heads of the State Department and Treasury and their counterparts in Beijing, was established to oversee progress in addressing these and other challenging issues. A forum of this type, with announcements to ensure that the public is kept apprised of the issues and the work being done to resolve these issues, is of value, only if this dialogue is substantive and not just ceremonial.

This virtual presidential summit can be transformative if, in addition to addressing these and other irritants, it also addresses the opportunity to cooperate on a multitude of geopolitical issues that affect the security of the US and China – and the world.

I’ll start with the nuclear issue and the fact that there’s minimal dialogue with China on its nuclear program. And given recent reporting on the three sites in China with the construction of hundreds of missile silos and the recent DIA report that China, by 2030, will have a nuclear arsenal of 1000 nuclear warheads is of concern. Ideally, China should be part of New Start arms control negotiations with the US and Russia. But they previously refused to join in this or any other arms control dialogue. At a minimum, China should be responsive to a dialogue with the US on nuclear-related issues, to include their recent test of two hypersonic missiles.

A separate but equally important dialogue with China is on cyber, to ensure that the cyber domain is not weaponized and used against our private sector for economic advantage. Also, to ensure that outer space is used exclusively for peaceful purposes.

There are a multitude of global issues requiring bilateral cooperation. We recently saw some US – China cooperation on climate change at the Glasgow COPS 26 UN Climate Change Conference. Obviously, more must be done, but this is a positive first step.

Other issues, like North Korea can and should be addressed now. China has unique leverage with a North Korea that relies on China for its economic survival. China can use that leverage to get North Korea to return to negotiations and to convince the North that complete and verifiable denuclearization, in return for significant deliverables, is in North Korea’s interest.

With over five million global casualties and over 760,000 deaths in the US due to COVID-19, it should be obvious that greater bilateral cooperation on this and future pandemics is necessary.

Go beyond the headlines with expert perspectives on today’s news with The Cipher Brief’s Daily Open-Source Podcast. Listen here or wherever you listen to podcasts.

Bilateral cooperation on nuclear proliferation, countering international terrorism, the trafficking of narcotics and confronting international organized crime are just some of the global issues that affect the security of the US and China and the global community. Failure to cooperate on these and other international issues is not only a security imperative, but a moral responsibility of all great powers.

Finally, with the Taliban back in control in Afghanistan, the US and China have a shared goal: ensuring that the Taliban does not allow Al Qaeda and other terrorist organizations to once again use Afghanistan as a base for its international terrorist operations. China has engaged this Taliban government and should use its significant financial leverage to ensure that all terrorist groups are permanently removed from Afghanistan.

Xi Jinping was just anointed by the Chinese Communist Party as one of its revered leaders, with Mao Zedong and Deng Xiaoping. The Party congress next year will likely give Xi a third five-year term as the Party’s Secretary General. There are a multitude of domestic issues requiring Xi’s and the Party’s attention, to include a campaign of “common prosperity” – addressing the disparity of wealth in a China governed by a capitalist system with Chinese characteristics.

Hopefully, President Xi Jinping will work with President Joe Biden to ensure that the two great powers, consumed with domestic issues, will also address the myriad of international issues requiring immediate and long-term attention and avoid a cold war that could veer into conflict.