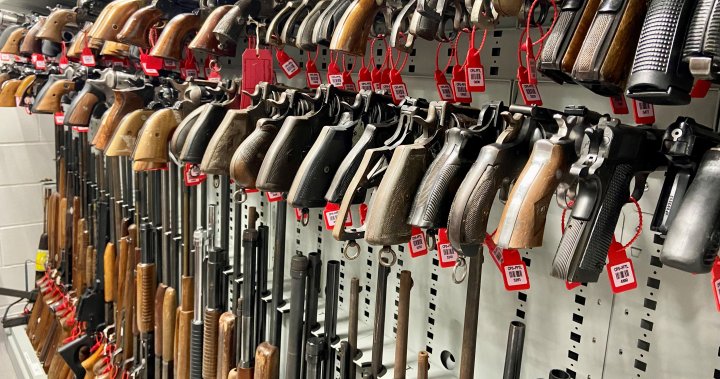 A new unit within the Calgary Police Service (CPS) is taking a harder look at how guns are making their way into the city and what crimes they’re connected with.

“What we’ve been able to do is draw clear lines between all our guns seized and our crime guns,” said CPS Staff Sgt. Ben Lawson with the Firearms Investigative Unit. “We fill that gap between…the investigative world and the forensics that’s being done on all the firearms.”

“The Firearms Investigative Team (FIT) started back in April of 2020 and consisted of one sergeant and five constables,” Lawson explained. “We wanted to know how many crime guns we’re seizing on a regular basis and where are they coming from.”

3:11
Gangs – Culture and Conflict: Taking a look back at Calgary’s Triple-slaying Bag

Gangs – Culture and Conflict: Taking a look back at Calgary’s Triple-slaying Bag

The Calgary Police Service defines a crime gun as a firearm that is unlawfully possessed, stored or used in a criminal offence.

Investigators said last year the unit investigated roughly 550 crime guns taken off Calgary’s streets mostly as a result of long term investigations. The majority of these firearms were seized during search warrants and traffic stops.

“Here in Calgary, we don’t see a lot of smuggled firearms coming from across the border,” Lawson said. “Over the last two years only eight per cent of our guns have been smuggled from the US”

“A lot of them are coming from straw purchasers and traffickers as well as break and enters and unfortunately a lot of them are still undetermined as to where they come from.”

A straw purchaser is someone who is a licensed gun owner who purchases firearms for a criminal organization or individual.

“Previously, no one in our service was solely looking at straw purchasers and firearms traffickers,” Lawson explained. “They would be targeted in other investigations but no one was specifically looking at those offenders.”

Meanwhile, in a new space the FIU is also housed under the same roof as the Forensic Firearm and Toolmark Lab.

The lab was first established about ten years ago and is only among two municipal labs in the country, resulting in speedier investigations.

“We’re putting a casing in 24 to 48 hours from a shooting happening and we get results instantly,” CPS firearms and toolmark examiner Lauren Black said. “If it’s a local hit, the evidence is retained just right next door to us and we can let investigators know the same day if these crime scenes are connected.”

Lawson said in the short time since its inception the unit has seen success.

“Our clearance rate on our shootings has been quite high in comparison to a lot of other agencies,” he said. “A lot of that is because of all the work that augments the investigation.”

“That includes our team that’s making sure all the dots are being connected from the hard work being done in the lab. It also includes the Organized Crime Offender Management group and making sure they’re involved with the same type of ballistics and forensics information.”

While police state getting illegal firearms out of the hands of criminals and prosecuting offenders is invaluable, they say there’s also work that needs to be done on the community level.

“We do need community resources, we do need programs that are out there that are going to be able to help with kids well before they put a gun into their hand,” O’Brien said. “We need families to tell us when they need help because we don’t know it until it’s too late.”

One initiative currently doing that work in Calgary is the Real Me Gang Intervention Program run out of the Center for Newcomers.

“The Real Me Program is an intervention program for first and second generation immigrant youth considered high-risk for gang or criminal involvement,” Noël Bahliby, the youth manager for the Center of Newcomers said. “It’s busier than ever and I’d say we’re frequently getting referrals.”

The program provides wrap around supports for young people between the ages of 12 and 24 years old by connecting them and their families with different resources.

“For a lot of the families we work with you can imagine newcomer families trying to learn English, get a job and build their life in Canada,” Bahliby said. “They may not have time to supervise their youth… (including) helping with their homework, checking who their friends are and where they’re spending their evenings.”

“We have this term called ‘third culture kids’ where they’re not quite their parent’s culture but their not quite Canadian culture and they’re seeking out a place to belong in Canadian society.”

On average there are about fifty young people in the program at any given time with another ten on a waitlist.

Bahliby said another troubling trend is that the average age is getting younger.

“I think when I first started the average was 17 (years old) now we’re averaging around 15 (years old) for youth actively in our program,” Bahliby said. “We’re getting youth… in grades 6, 7 and 8 that have charges, have been to juvenile corrections and have been involved in crime.”

“It’s always frustrating to know that (their) time on the waitlist, that window for them being open to our program might pass.”

The Real Me Program is among several resources highlighted in a report by the community-based Public Safety Task force released last year.

“I really think it’s a good report,” said Mount Royal University Justice Studies professor Doug King. “I think it really lays out a strong road map to the issues that were identified pre-pandemic and the issues that are confronting us now.”

Some of the findings from the report include the need to increase awareness and communication at the community level and secure more funding for specialized programs.

“There is a need to provide more support for high-risk youth and adults who are ready to leave the gang lifestyle and transition back into the community,” the report reads. “For those released from remand, more short-term supports are needed to quickly connect individuals with resources.”

King said since the final report was released in April 2021 many Calgarians have been left in the dark about what recommendations have been implemented over the past year.

“They have all of these recommendations but then (the city) punctuated the funding to the feds,” King said. “Show us where you’re funding it and what results you’ve got.”

One Task Force action states the city will create an action plan for funding and apply for anticipated federal grants from Public Safety Canada.

“Calgary’s potential share of the funding over the next five years would then finance requested proposals from the community that align with the criteria to support immediate, Calgary-based community solutions specific to gang and gun violence,” the report reads.

That funding could also be available to Calgary sooner than later with the federal government announcing $250 million in March as part of the Building Safer Communities Fund.

“Communities demonstrating a history of gun and gang-related harm will receive the most funding to build capacity to change the social conditions that lead to criminality by bolstering gang-prevention programming,” said Public Safety Canada media relations spokesperson Nic Defalco in an email to GlobalNews. “Identified municipalities and Indigenous communities that meet the identified profile and program requirements will be eligible for funding this year.

“Communities have been identified using evidence-based criteria and they will be contacted by Public Safety Canada over the coming weeks.”

City of Calgary media spokesperson Kaila Lagran said the city is still navigating what the potential funding could mean for programs in Calgary.

“The program will provide funds, through 2025-26 to eligible municipalities,” Lagran said. “The City of Calgary will be working with Public Safety Canada on a funding agreement to understand the amount of funds that can be distributed to local organizations that focus on children, youth and young adults who are involved in, or at risk of, joining gangs .”