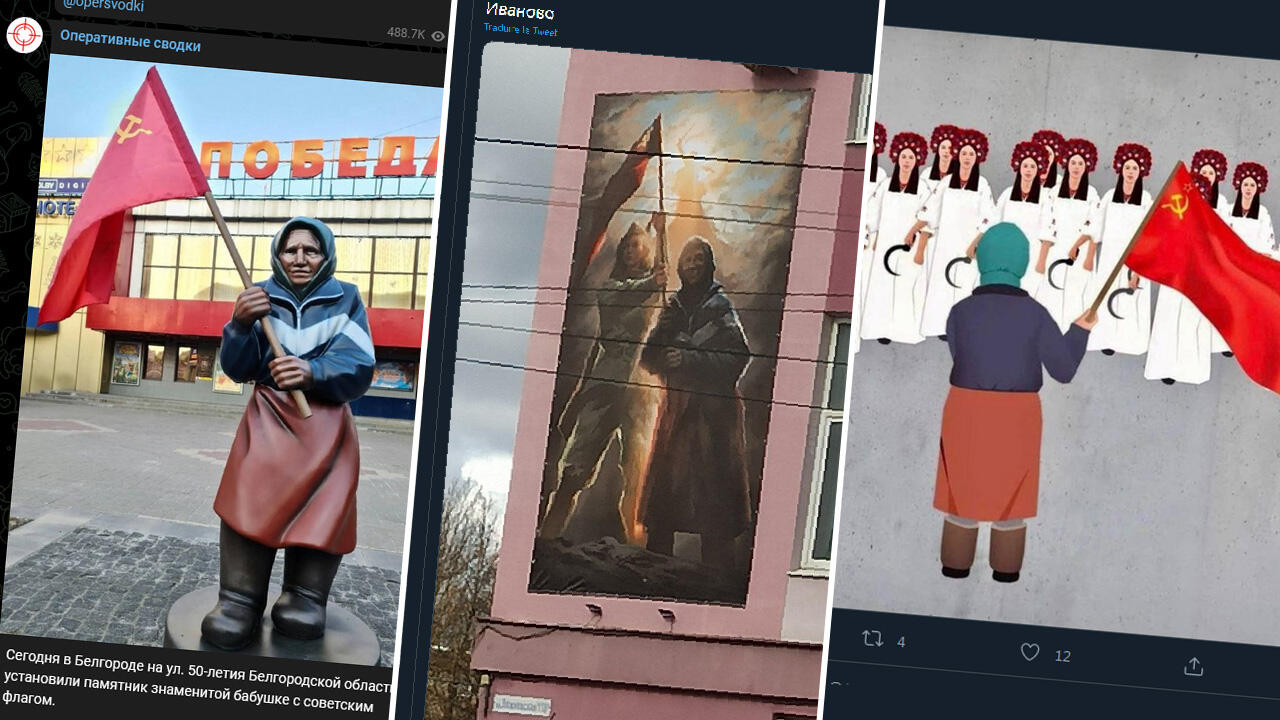 Russian soldiers occupying Mariupol unveiled a strange statue in the embattled Ukrainian city on Thursday. The statue, of a Ukrainian peasant woman holding a Soviet flag, is of “Babushka Z” – who appeared in a video recorded by Ukrainian soldiers and has now become the unlikely latest icon of Russian propaganda.

In recent weeks, the elderly Ukrainian woman – whose image is a throwback to a stereotypical peasant woman of the Soviet era – has become the new face of Kremlin propaganda as well as a star among pro-war Russians. Giant placards depict her waving a Soviet flag in Moscow while postcards of her de ella with the same banner are being sold all over Russia.

No one calls her by her real name in Russia, she has simply become “Babushka Z’” or “Babushka (“grandmother” in Russian) of victory”. The “Z” symbol is used by Russian forces taking part in the invasion of Ukraine, often painted on armored vehicles.

In early April, she was the subject of several reports on Russian television. According to the English-language Moscow Times, a Russian artist has made wooden sculptures of her by her. In Mariupol, the occupying Russian forces unveiled the “Babushka Z” statue on May 5 in the presence of Sergei Kiriyenko, Russian President Vladimir Putin’s deputy chief of staff.

According to Joanna Szostek, an expert in Russian media and political communication at the University of Glasgow, the Babushka story “fits the Russian propaganda narrative perfectly”.

Babushka Z first appeared in a strange video recorded in early April by Ukrainian soldiers. The video shows the soldiers approaching a small farm in the Donbas region and an old woman proudly holding the Soviet flag at arm’s length.

Surprised but not dismayed, the Ukrainians give her some food and take the flag from her. She first accepts but then gives it back to them when she understands she is not dealing with the “Russian soldiers who have come to liberate her” but with Ukrainians who, in a supreme insult, are trampling on the flag.

Since then a second video has been posted on the Telegram app that identifies the woman as Anya and says she lives near Dvorichna, 5 kilometers from the front line.

The initial video “illustrates the clash of memories that has been weaponized by Putin”, said Jaroslava Barbieri, an expert on Russian relations with former Soviet bloc nations at Birmingham University.

“On the one hand you see this old woman who regrets the collapse of the Soviet Union and still looks at Russians as liberators. Then you have the opposite view of the Ukrainian soldiers, shocked to see that some Ukrainians could see it this way,” Barbieri observed.

“It’s an ideal story for the Kremlin because it has emerged on the grassroots and is a rare example of popular support that fits with Putin’s narrative,” said Professor Stephen Hutchings, a Russian media expert at Manchester University.

Babushka Z lends credence to Putin’s outlandish claims that the Russian soldiers have come to “liberate” Ukraine from fascism.

A new icon of ‘Mother Russia’?

It is also a godsend for the Russian media.

“There are a couple of reasons that this particular story and image has been so widely reproduced in Russian state media,” said Dr. Precious Chatterje-Doody, an expert in political communication and international relations at the UK’s Open University.

“First, Russian TV is now almost wall-to-wall ‘special operation’ coverage. Human interest stories help to make this more engaging. Second, it’s a valuable example for the Kremlin of a positive reception. Most Ukrainians (even in Russian-speaking regions) have not welcomed Russian soldiers but actively resisted them, and state media is promoting this image to try and hide that fact,” she added.

Babushka Z offers another benefit for the Kremlin, Szostek said: “it’s a more rare example of down-top propaganda as opposed to top-down.”

The video, which has been authenticated by Ukrainian media, is not a creation of the Russian authorities that was then promoted on social networks by Russian trolls on the Internet.

“From the beginning the propaganda machine in Moscow has tried to give a bottom-up twist of their messaging, and this is just perfect for them,” Hutchings said.

What more could one ask for? The Soviet flag is the icing on this propaganda cake. According to Hutchings, it is also important “because of the iconography of the Soviet flag and the old lady which resonates for every Russian who is familiar with the WWII postcard of ‘Mother Russia’”.

Barbieri agreed that the nostalgic Babushka Z imagery must be extremely pleasing to those at the Kremlin.

“It’s the glorification of an older generation to call the newer generation to repeat the success of the past. Putin is very much into glorifying the Soviet past because it lets him hide that he has no prospects to offer for the Russian people,” Barbieri said.

“The fact that it is a Ukrainian woman that incarnates ‘Mother Russia’ shows that it is one people despite being two countries. It resonates with the new narrative of de-ukrainisation instead of denazification of Ukraine,” Hutchings said.

“The glorification of a humble woman speaks to the living condition of Russia’s common people that the Kremlin says it represents. It gives the people a sense of meaning while it lets the government hide the kleptocracy,” Barbieri said.

Babushka Z also comes at the best possible time for Russia. On May 9, the country will hold its annual parade celebrating the Soviet victory over the Nazi regime during World War II – a day filled with pageantry and wartime symbolism. “I would be very surprised if this video is not used during the May 9 celebrations,” Hutchings said.

This article has been translated from the original in French.