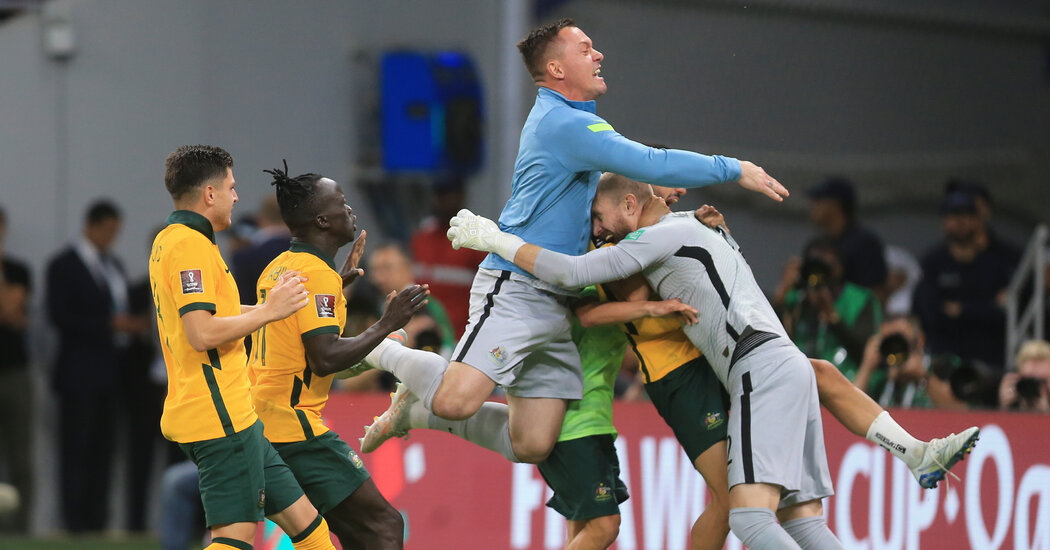 The Australia Letter is a weekly newsletter from our Australia bureau. sign up to get it by email.

SYDNEY, Australia — I woke up early Tuesday morning, figuring that the World Cup qualifier in Qatar between Australia and Peru would already be over — but no. It was still scoreless after extra time.

I jumped out of bed and said something to my wife, Diana, about a “shootout,” then had to quickly explain that I did not mean another mass shooting in America.

The stakes were huge: The winner would continue on to the World Cup in November while the losing team would go home, the players’ heads held down in shame.

A few minutes later, Diana and I were in front of the television. We screamed when Peru stopped Australia’s first shot. We watched with a deep sense of worry for Australia when the Socceroos swapped out their usual goalkeeper for Andrew Redmayne, the “Grey Wiggle” who dances like a child in front of the goal before trying to stop an opponent’s kick.

It seemed like it would be impossible for Australia to win. Diana and I had lived and traveled in Latin America. We knew how seriously the countries there take their football.

Over many years and locations, we’d also come to worship World Cup soccer with a special kind of zeal. I was a late convert. I watched my first matches as an adult, during the 1998 World Cup, while traveling with friends in Peru. After Diana and I got married and started living the life of restless correspondents, we became even more committed. International soccer was something found everywhere that let us bond with almost anyone.

When we covered the Iraq war, we heard gunfire shot into the air across Baghdad whenever the national team won, and we still celebrated every qualifier and small tournament win. At one point in 2007, we even found ourselves jumping up and down in a restaurant in Amman, Jordan, hugging strangers fleeing the war after Iraq won a tight match. I don’t remember the score. I remember Iraqi flags and a rare emotion at the time. Pure joy.

When we moved to Miami after that, soccer brought us another happy moment. Unexpectedly, the World Cup even managed to weave itself forever into family lore.

It was the afternoon of July 2, 2010. Ghana and Uruguay had played to a tie in a quarterfinal match, and the penalty shootout seemed to carry extra meaning. The tournament took place in South Africa, and Ghana was the last African team remaining. Diana and I were both desperate for Ghana to win — so after they missed a key shot, Diana jumped up out of her chair, twisted and punched the air.

She was 38 weeks pregnant. She felt something stretchy. About five hours later, our daughter Amelia was born, with a shove into labor from the World Cup.

For us, cheering for Australia’s team is simply a natural progression. I like Peru, and I have to admit, I’m not a fan of Australia’s uniforms with their odd and unnecessary collar, but as the shootout continued on Tuesday, there was no doubt which team Diana and I were cheering for. We chewed our nails as the two teams exchanged goals. We smiled at the Gray Wiggle’s moves, hoping that silliness would not fail, but fearing it could.

And then, when he stopped the final shot that secured the win — and stood up, mouth agape, looking shocked — we were right there with every other Australian who happened to be watching at the odd pre-coffee hour, jumping up and down like toddlers on a trampoline.

If you’re wondering what we looked like, it was a bit like ABC News Breakfast’s Tony Armstrong, who was celebrating with fans at Federation Square in Melbourne, hopping around on live television and shouting: “We’re through, we’re through to the World Cup!”

By that point, our son, Balthazar, had joined us for the final minutes of the match. Amelia was straggling in with bleary eyes, asking what was going on and why we were all so awake.

She said, hardly surprised at seeing her parents out of breath with excitement. She knew the deal. Soccer is the world’s game, for our world-loving family. It’s the sport that’s inseparable from the story of her birth. It’s the special kind of contest where nationalism can be borrowed and passion can be shared across nearly every divide.

And now, it’s where the Wiggle wins.

Here are our stories of the week.